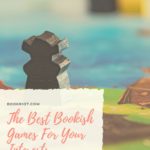 If you’re a reader and/or have befriended one, you’ve probably also played Scrabble—or UpWords or Bananagrams, for that matter. I grew up playing and loving word games, with a smattering of Dungeons & Dragons as a teen, but it’s only as an adult that I’ve discovered bookish boardgames and card games that fall squarely in my wheelhouse. Let’s dive in, shall we?

I don’t know where my love of books featuring diseases came from, but it’s here and it’s real. Whether it’s nonfiction about doctors, researchers, and epidemiologists, or dystopias brought about by a devastating new virus, I am so ready. (Perhaps it’s how I’m assuaging my fears about the state of global health? Get your flu shots, folks.) As it turns out, there’s a game for that! 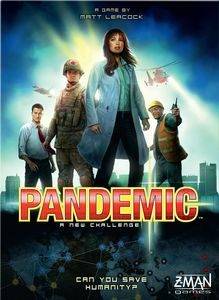 Pandemic is the game that taught me that I love collaborative tabletop games. Taking on specific roles (Researcher, Quarantine Specialist, etc.) that each have different powers, you and your fellow players work as a team to prevent and cure outbreaks of four different diseases across the world. I’m not a super competitive person and while I certainly enjoy winning, winning as a team is even more satisfying to me. Pandemic is also a great two-player game as well as a party-game, and that is so rare. There are several levels of difficulty (currently I’m at Level 5), it doesn’t take a bajillion hours to play, and both strategy and chance play a role. This is the game my partner and I most regularly take out when we’ve got a couple hours of free time and don’t want to spend it with a screen.

I am, very obviously, a huge fan of science fiction. (Listen to SFF Yeah!, okay thanks bye!) So imagine my delight when I discovered Terraforming Mars. 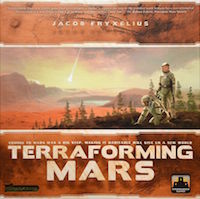 On a recent vacation, we found a little shop that would rent us games at a daily rate. Terraforming Mars was the only one we kept for two days. That was partly because figuring out the game play took way longer than we thought, so by the time we actually started playing it was 10:00 at night. We didn’t truly finish that first game, and both felt like we wanted another crack at it.

Players compete with each other to raise the oxygen percentage and temperature on Mars, thus making it safe enough for humans and collecting game points in the process. Building forests and seas alternate with mining, science experiments, some government bureaucracy, and more, and there are lots of winks to science fiction and Kim Stanley Robinson in particular. It’s a space nerd’s game, no doubt. While the rules could use some clarifying and/or simplifying to make learning it a quicker process, it’s a beautifully detailed, thoughtfully constructed game, and one I’m actually going to buy. (My games bookcase is rapidly beginning to resemble my books bookcase: overflowing.) 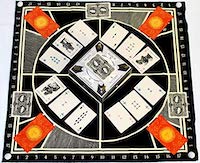 It was definitely the intention of the makers of Illimat that you feel as though you are part of a secret society, and they succeeded. While playing, I often feel like I’m in the pages of The Secret History by Donna Tartt, The Luminaries by Eleanor Catton, or Jonathan Strange and Mr. Norrell by Susanna Clarke; everyone is rich, several people are wearing pocket watches or monocles, and we’ve all got snifters of brandy. (I have never seen a snifter in real life, for the record.)

A card game not unlike Rummy or Hearts that is also completely its own weird, occultish thing, Illimat is great for 2–4 players, which I’m always looking for because finding more than 1 other person to play a game with you is sometimes next to impossible. And the game pieces themselves are gorgeous! Plus it’s fairly easy to learn; we picked it up at a boardgame convention at a demo, where the lovely British man at the booth both taught us and played a round with us in about 20 minutes. 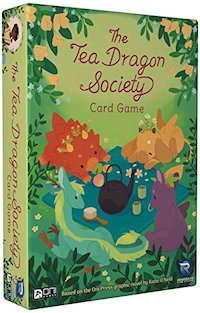 Who doesn’t love baby dragons? Especially adorable cartoon ones? I don’t want to know. I’ve been a huge fan of Katie O’Neill’s The Tea Dragon Society since it was a webcomic, and I could not have been more delighted when they announced they were turning it into a game.

We’re seeing more and more of this (also: Dune, Tak from the Kingkiller Chronicles, Game of Thrones), and while most of these take the form of RPGs or territory-claiming games, it’s perhaps no surprise that this is a gentle, simple, cozy card game. The original graphic novel is about a young girl who discovers that she has a knack for caring for (you guessed it) tiny tea-making dragons, and The Tea Dragon Society Card Game is all about learning the dragons’ personalities, caring for them, not getting bit when they’re grumpy, you get the idea. Adorable, low-key fun, and definitely good for kids!

Need even more bookish games? Here are some pairings!

Note: Portions of this post were adapted from exclusive content for the Book Riot Insiders community. Sign up here for more of this brand of bookish goodness!