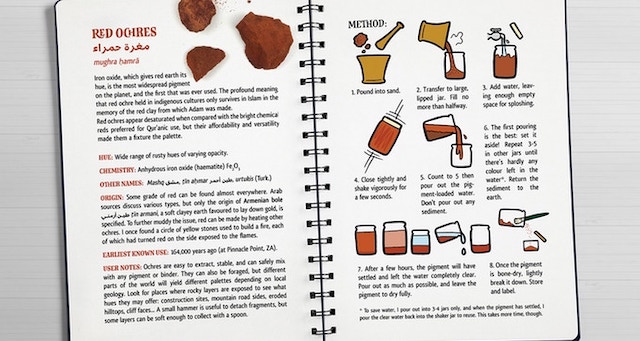 I have a soft spot for artist-practitioners who make academics re-see the world. There’s Janet Stephens, hair stylist by day and hair archaeologist by night. There are chef-scholars like Nawal Nasrallah, who doesn’t just write about medieval food, but also cooks it. And there is Joumana Medlej—an artist specialized in Kufic scripts & natural materials. Her Twitter threads about the limits of scholarly knowledge are both entertaining and edifying.

I had seen the classes Medlej offers online. After all, she teaches in manuscript Kufic at the Arab British Centre, which sounds fantastic enough. But it was perhaps last December that I first ran across her secret superhero identity, when she took the time to explain what was wrong about a tweet from Museums With No Frontiers.

This “exactement” turned into a long thread on the inks and pigments used in early Qu’rans.

And that led to her Kickstarter. The response to her thread, she writes, “was way way more enthusiastic than expected, and encouraged me to bring a long-suffering idea to life: put all this into a book.”

What’s in the Book?

The book will be a “concise, approachable, illustrated manual examining the main materials used in Islamic manuscripts[.]” But it won’t be a scholar-focused text. Instead, it will include technical information, cultural information, and “of course lots of historical recipes!”

The complete edition, she writes, will includes reference sheets with painted swatches. This way “you can have a proper look at the real thing.” 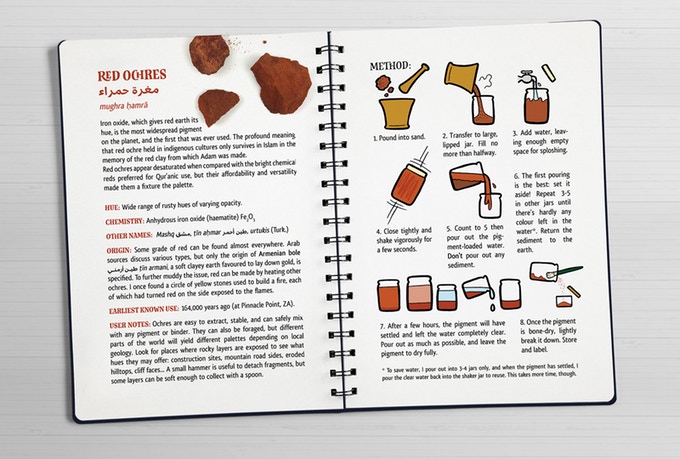 Why Does This Book Matter?

As Medlej writes, there are books about traditional and modern pigments, but they generally have a European focus. About the Middle East, there are only research papers. These are not designed to be read by working artists.

Medlej is also deeply passionate about her subject. “Not only does each natural pigment or dye behave differently,” she writes, but each has “its own personality[.]” To make them, she says, involves an understanding of chemistry, botany, seasonal cycles, the materiality of things.”

Most of them were also used as food or remedies, not to mention associated with celestial bodies. The artist was aware of being at the receiving end of an entire world of different substances with their own lives and interrelationships. The value of laboriously prepared colours was appreciated, and wasting them unthinkable. This entire dimension, which is a way of life, is completely cut out of the equation when the creation process only begins with squeezing paint out of a tube.

Although the top-level rewards are all gone, those interested in pledging can still get a book. Books are available as PDF and as physical copies.

Although Medlej’s original goal was to raise $1,300 to help her finish the project, she has now raised more than $17,000.

The Kickstarter has also been offering updates about her work at the British Library and at her home studio. 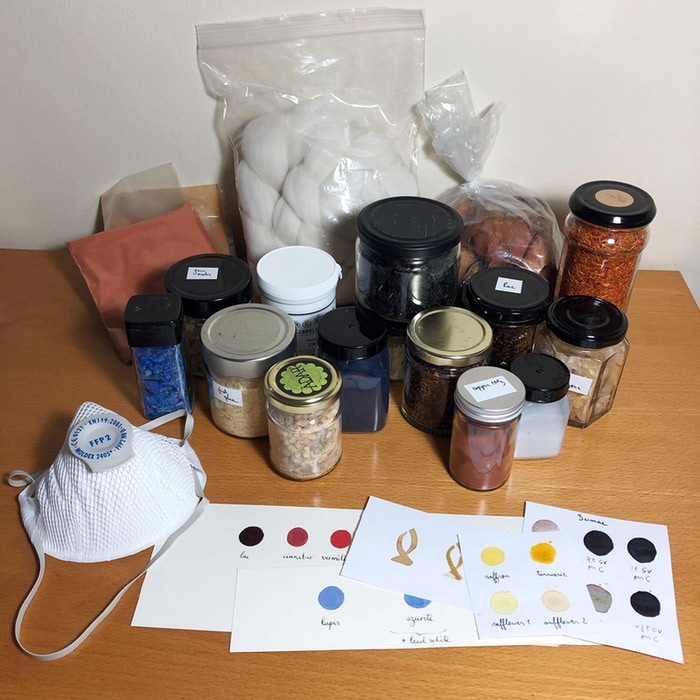 She also posted the table of contents online. It includes an introduction, notes about equipment, safety, and definitions. Readers will learn about “binders, mordants, & other additives,” many of which I’ve never heard of. There are “egg glair” and “iron mordant,” as well as the use of “myrrh, yoghurt, and vinegar.”

Inks will be broken up by color and type—who knew there were so many ways of making red! Appendices will explain both the “pharmaceutic and culinary uses of materials mentioned” and where to source materials.

The project launched on January 10, 2020. Fundraising stops on February 9. However, I hope people will still be able to order the book, even if they don’t get in on the Kickstarter.

You can also see more on Medlej’s website and/or support her on Patreon.