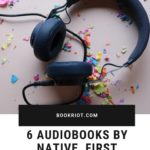 This list of audiobooks by Native, First Nations, or Indigenous authors is sponsored by Book Riot Insiders, the exclusive digital hangout for the Book Riot community.

The new year always brings dozens of brand new reading challenges, including one of my favorites, Mallory Whiteduck’s Native Literature Challenge (on Instagram). Her challenge is perfect for bookish types wanting to read more literature from First Nations, Native, or Indigenous authors. When it comes to audiobooks, I always keep my eye out for titles with own voices narrators and treasure the ones I find. Today, I’m excited to share a few of my all-time favorites with you! 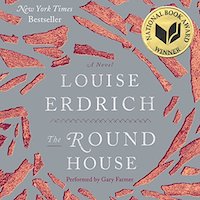 The Round House by Louise Erdrich, Narrated by Gary Farmer

Louise Erdrich, of the Ojibwe Nation, is one of the most beloved Native American writers of our time. Her writing creates images and feelings that stay with you long after you’ve listened to the final, memorable pages. Her National Book Award winning novel The Round House is no exception. Part mystery, part coming-of-age tale, The Round House tells the story of a Native American boy grappling with the aftermath of his mother being sexually assaulted. Erdrich proves a masterful storyteller as she weaves together this novel about a young man’s search for justice and his realization that the people he loves most may never receive it. The audiobook edition is narrated by Gary Farmer, a First Nations actor born into the Cayuga Nation. Farmer’s voice beautifully enhances the story, filling each sentence with the depth of the protagonist’s feelings. 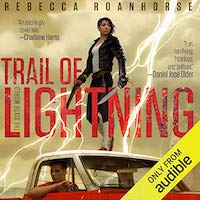 Trail of Lightning by Rebecca Roanhorse, Narrated by Tanis Parenteu

In 2019, I read Rebecca Roanhorse, of Ohkay Owingeh Pueblo descent, for the first time. Her novel Trail of Lighting starts after the end of the world has come and gone, but the Dinétah (Navajo) people have survived. In a world now filled with supernatural beings, Maggie, a Dinétah, is a badass lady monster hunter who reluctantly chooses to help search for a missing girl. On her quest, Maggie runs into all sorts of supernatural beings who may or may not want her killed for unknown, personal reasons. Tanis Parenteau, a member of the Métis Nation of Alberta, provides the perfect amount of personality in her narration, making Maggie’s character come alive. I loved this audiobook so much that I immediately started the sequel Storm of Locusts. It’s just that good. 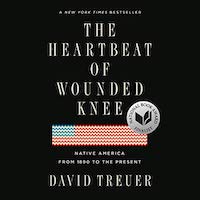 Another audiobook narrated by Tanis Parenteau, Heartbeat at Wounded Knee stood out to me as one of the best nonfiction titles I read in 2019. David Treuer, of the Ojibwe Nation, follows the contemporary history of Native Nations from 1890 to the present, emphasizing that the Indigenous peoples of North America never disappeared as some might like to think. In 500 pages, Treuer covers a lot of ground, but Parenteau’s narration is up for the task, guiding readers through many decades of turmoil and advances in Native American life. 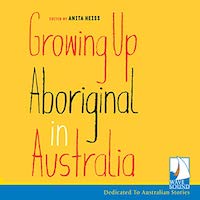 Growing Up Aboriginal in Australia edited by Anita Heiss, Narrated by a Full Cast

Part of a series of anthologies featuring the experience of minority groups in Australia, Growing Up Aboriginal in Australia is a collection of essays edited by Anita Heiss, a member of the Wiradjuri Nation of Central New South Wales. The strength of this anthology is its intersectional look at the Aboriginal experience, including a wide variety of Aboriginal writers from different sexual orientations, genders, classes, abilities, and ages. The essays are narrated by a full cast, all of whom are of Indigenous or Aboriginal descent. In addition to adding an authentic quality to the performance, the rotation of narrators tells the reader when one essay has ended and another has begun and provides a fresh voice for each new perspective. 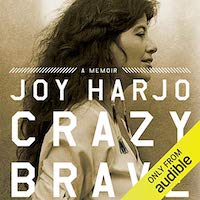 Crazy Brave by Joy Harjo, Narrated by the Author

Our current Poet Laureate, Joy Harjo of the Muscogee (Creek) Nation, published her memoir a few years ago, proving her skill at prose as well as poetry. Harjo narrates the audiobook with delicacy and grace, her voice flowing from one paragraph to another. Her poetic talents infuse the prose with an exceptional tone and style. Instead of reading the poems she’s included in the text, she sings, powerfully and effectively combining her two great loves, words and music. 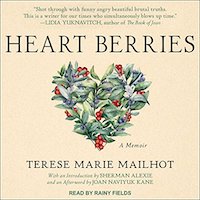 Terese Marie Mailhot, a First Nations author from the Seabird Island Band, published her memoir Heart Berries in 2018 to great acclaim. She tells the story of her life in short, non-linear chapters, like a photo album she’s flipping through and pointing out the memories that have stayed with her. Mailhot confronts her past, the trauma that she has experienced, but makes no promises of a resolution. This is her story, as much as she will share, and that’s enough. Rainy Fields, a member of the Muskogee (Creek) Nation, performs the audiobook edition, beautifully capturing the flow and cadence of Mailhot’s prose.