If you were a teen reading in the mid-aughts, chances are you came across an intriguing cover at the library or bookstore. A girl with striking blue eyes and dark tawny hair peeks from behind large, textured leaves. She’s up close, but we only see half her face. She is Tally Youngblood. Her story is called Uglies.

First published in 2005, Uglies by Scott Westerfeld is something of an enigma—at least to me. The plot is like many other young adult dystopian novels: a girl (of course) is born into a society that overly controls and classifies its citizens. Our heroine is in line with the society’s wishes and standards until she discovers the truth behind it all and begins to fight back and work to dismantle the system. In the case of Uglies, Tally, like all other 16-year-olds, is destined to have surgery that will turn her from an “ugly” to a “pretty.” But there’s more to the surgery than cosmetics—it also includes brain surgery that makes citizens vapid and compliant. Once Tally learns this, she starts on a mission to end the practice and free those who have been made simpleminded. And, of course, there’s a boy. 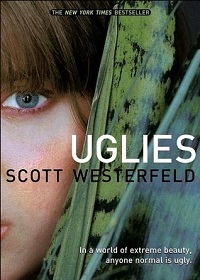 Although Uglies was fairly popular in its time, that it didn’t quite reach the levels of other young adult dystopian novels is evident. An editorial director at Simon Pulse, Bethany Buck, noted “In hindsight, [Uglies was] so ahead of its time.” This likely had something to do with its relative lack of demand.

The Hunger Games appeared three years later, in 2008, and The Maze Runner was published the year after that. Dystopian YA picked up steam, and soon we had Divergent, Matched, The Selection, Legend, and more. In fact, although Uglies came out in 2005, it didn’t hit the bestseller list until almost two years later, just as these other series were starting to appear on readers’ radars. All of them followed similar formulas and featured comparable tropes to Uglies.

With the popularity of Uglies, you have to wonder if perhaps it was one of the key books—and series—that kicked off the YA dystopian boom. In a sense, it’s as if Uglies was a small match while the series that followed were barrels of oil, just waiting to be lit. Kaboom indeed.

The unfortunate (well, depending on your perspective) consequence of being a match rather than a barrel is that, to date, there has been no film adaptation of the series. Though it would likely make an excellent movie or television show, Uglies has yet to make it to the screen. Westerfeld wrote a blog post update on film optioning in 2009, but it seems that since then, the news of any adaptations and dream has died—at least, anything reliable. There are a handful of Google results when you search for news about the adaptation, but nothing terribly solid or from a source that seems particularly legitimate. Was it because, at the time of Uglies’ publication, Hollywood hadn’t yet quite realized how much money there was to be made in YA dystopian film adaptation and now its time has passed? Who’s to say.

Still, the popularity of Uglies and its sequels is undeniable. Although it was originally intended to be a trilogy, avid fan support encouraged a fourth book in the series, Extras. Westerfeld commented on this in the dedication of the fourth book: “To everyone who wrote to me to reveal the secret definition of the world ‘trilogy.’” Even today, the series is still on people’s minds. At Archive of Our Own, there are at least 40 stories inspired by Uglies, the most recent one updated in September 2019.

So what it is that made Uglies so popular at the time and still an enduring book?

Certainly the existing political and social climate over the last decade-plus lends itself to a desire for dystopian stories, and the book has that going for it. It also features the “strong girl” archetype that really came into its own in young adult literature at the time (though I think since then we’ve evolved in how we define and expect a “strong girl” to behave). Westerfeld also executed the world-building of Uglies spectacularly, with developed slang, defined camps of thought, and explanation of the practical side of the technology throughout the series.

What’s more, Westerfeld clearly takes teens seriously. The book and its sequels are smart; they believe in smart teens as characters and they believe in smart teens as readers. With this, combined with the excellent plot that, for its time, was original for its audience, there’s no wonder that the series was and continues to be as popular as it was and is. Westerfeld has written a number of other books and series, including another science fiction series, Midnighters—but it seems he’s never quite managed the same amount of success as he did with Uglies. At least, not yet.

It’s troubling to me that Uglies appears to have played such a major role in the YA dystopian explosion and achieved such popularity, yet it didn’t break through to become as massive as the franchises that followed it. So goes the way of trends in publishing and media, I suppose. Still, it says something to me that 15 years later, Uglies is still on my mind, still something I return to in my thoughts, still influencing—however indirectly at this point—books we see published today. The teens who read Uglies at the time of its publication are now adults. And some of those adults are writing and publishing stories of their own.

We may be crumblies now, but everything is just bubbly so long as we have Uglies.

Feeling nostalgic? Check out our look at Twilight ten years after its publication.

Sign up for What's Up In YA? to receive all things young adult literature.
Thank you for signing up! Keep an eye on your inbox.
By signing up you agree to our Terms of Service
#Opinion#Young Adult Literature