The Lives of Saints from bestselling author Leigh Bardugo. 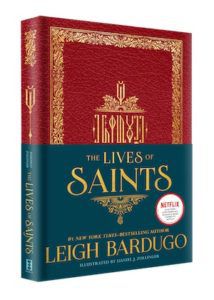 Experience the Grishaverse like never before. . . Out of the pages of the Shadow and Bone trilogy, from the hands of Alina Starkov to yours, soon to be part of a Netflix original series—immerse yourself in the epic world of international bestselling author Leigh Bardugo with this beautifully illustrated replica of The Lives of Saints, the Istorii Sankt’ya. These tales include stunning full-color illustrations of miracles and martyrdoms from familiar saints plus strange and obscure stories drawn from the novels and beyond. “This is what fantasy is for.” —The New York Times

This year has been very good to us when it comes to YA books in graphic form, both fiction and nonfiction. In particular, I’ve been really impressed by some of the YA graphic memoirs I’ve read, and so I thought I’d share them here. Here are three must-read 2020 YA graphic memoirs about everything from art, grief, banned books, and finding your place!

This book has one of those premises that makes you go, “She did what?” It’s about how Robin grew up in Seoul, until, at the age of 14, her mom took her on vacation to the U.S. and then announced that they wouldn’t be returning to Korea—not for their things, not to say goodbye to any of their friends. Robin was devastated and furious at her mother and at her mom’s new partner, and as she struggled to acclimate to her new world, she turned to artwork for consolation. This is about her artistic journey, but it’s also about learning to forgive her mom, and understand why she made the choices she did.

Dancing at the Pity Party by Tyler Feder

In this funny, heartfelt, and sometimes really sad graphic memoir, Tyler Feder recounts what it’s like to hear that your mom has cancer, and to be there alongside her as she fights for her life and ultimately passes away. This graphic memoir pulls no punches about grief and loss and learning to move forward, but the tone is funny and caring, and humorous spreads about how to have a great cry or wishing for a dead mom app make it feel like a funny how-to book at times. This is a really great novel for readers who enjoy emotional reads, and for anyone who is feeling alone after a loss and wants something humorous but also mindful.

In a book that feels more relevant than ever, Hyun Sook recounts what it was like to head to college in Seoul in 1983, and the exhilaration she felt at finally being able to study western literature. But what she found was that the military government strictly controlled media, and it wasn’t long before she was a part of a banned book club that secretly read the censored and forbidden texts the government had banned—and she took greater and greater risks along the way.