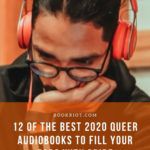 Are you an audiobook listener? Are you in need of some fantastic queer stories to listen to during Pride month this year? If the first six months are any indication, 2020 is shaping up to be a phenomenal year for queer audiobooks. I’ve been having trouble focusing on print/digital books over the last few months, so most of my reading has been via audio. I’ve been happily devouring queer audiobooks; in fact, I’ve enjoyed so many new releases that I had trouble picking out a reasonable number for this list.

These books are all from the first half of 2020 and they all feature outstanding narration. They’re queer in very different ways. Some are queer stories to their core. Some feature queer characters but aren’t about specifically queer experiences. They’re a mix of fun, bittersweet, serious, and silly. Whatever mood you’re in, hopefully one of these listens will satisfy your queer audiobook cravings. 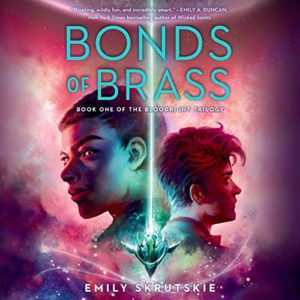 Bonds of Brass by Emily Skrutskie, Read by James Fouhey

If you’re looking for a space adventure with enthralling world-building, complicated and mistake-prone characters, and a side of slow-burn romance, this is your book. Ettian is studying to be a pilot at the Umber military academy when he learns that his best friend, Gal, is actually the heir to the throne of the Umber Empire—the Empire that conquered Ettian’s people. After someone tries to assassinate Gal, the two flee the academy in search of safety. It is the perfect blend of fast-paced action and romantic pining. The audio is out-of-control good. Fouhey does unique character voices and his first-person voicing of Ettian is emotional and heart wrenching. It’s everything I could ever ask from a narrator. 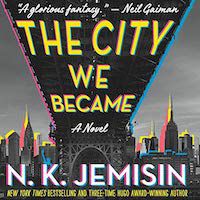 The City We Became by N.K. Jemisin, Read by Robin Miles

It’s no secret that I love Robin Miles, and I’ve listened to a lot of her work, but I’m convinced that this audiobook is her masterpiece. It’s a unique fantasy in which New York City comes alive in the form of five people, each embodying a different borough. They’re suddenly thrust together to fight the creepy, evil force that’s trying to destroy the city. This is a book that pulses with the life of New York, and Robin Miles just nails it. She slips in and out of a dozen accents at least, but more than that, she captures the rhythm and movement and beat of the city in her voice.

Clap When You Land 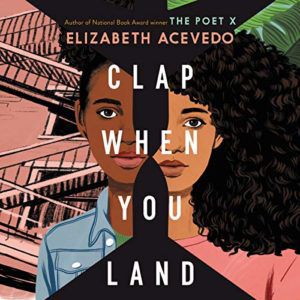 Acevedo is a brilliant narrator (not to mention writer) and she doesn’t disappoint here. In this dual-POV novel in verse, two sisters who’ve never met discover each other in the wake of their father’s sudden death. Camino lives with her aunt in the Dominican Republic, and Yaharia lives in New York with her mom. Both Acevedo and Marte beautifully capture the two teenager’s very different and distinct voices. I was not expecting this to be a queer book so I was pleasant surprised by casual queer rep; I loved the poignant relationship between Yahaira and her girlfriend. 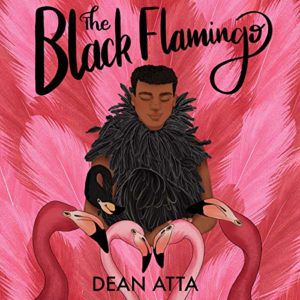 This is another brilliant novel in verse, this one a coming-of-age novel about a biracial gay teenager in the UK. Michael struggles with finding his place in the world and his voice throughout his teen years. When he begins to do drag in college, he comes into his own. The poetry is gorgeous, and Dean Atta’s performance is phenomenal. This is a short but riveting listen; you’ll immediately be swept into Michael’s story and words, and won’t be able to put it down. 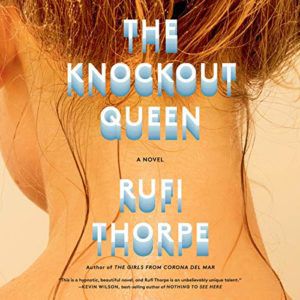 The Knockout Queen by Rufi Thorpe, Read by Michael Crouch

This is an often grim but deeply moving story about the friendship between two lonely teenagers. Michael lives with his aunt in a wealthy California suburb, and spends his weekends hooking up with men he meets on the internet. His next-door neighbor, Bunny, is a star volleyball player living with her alcoholic dad. Their lives are marked by neglect and abuse, and so they find family in each other. Michael Crouch’s pitch-perfect narration elevates this book to a whole new level. His voice captures every messy nuance of Michael’s emotions, from elation to despair and everything in between. 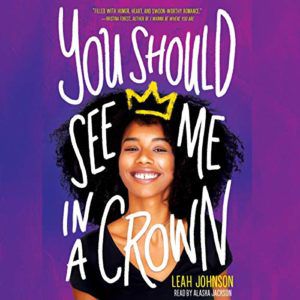 You Should See Me in a Crown by Leah Johnson, Read by Alaska Jackson

When Liz’s financial aid for college unexpectedly falls through, she turns instead to the scholarship awarded each year to prom king and queen. She hates being in the spotlight, but she’ll try anything to get her dream. Luckily, the whole thing is made a little better by the new girl in school…who also happens to be Liz’s prom queen competition. This is a fun, exuberant novel about a queer Black girl that’s full of friendship, romance, and self-discovery. Alaska Jackson’s narration is equally delightful; Liz’s character comes through loud and clear in her voice. 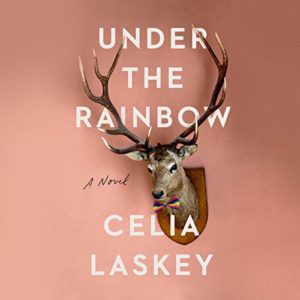 Under the Rainbow by Celia Laskey, Read by a Full Cast

In this wry but heartfelt novel, a national nonprofit declares that Big Burr, Kansas, is the most homophobic town in the country, and sends in a group of queer volunteers to live there for two years in an attempt to change people’s perspectives. It turns out everyone, newcomer and residents alike, finds something unexpected in each other. The story is told from many POVs, and the full cast narration is the perfect audio format for it. A large cast of narrators adds to the feeling of expansiveness in this book—it’s about a town, and not just any one person. 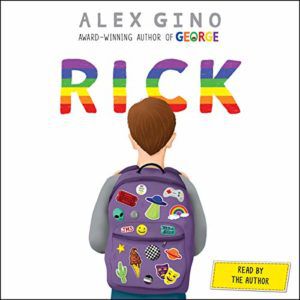 Pick this up if you’re looking for a quick, uplifting middle grade listen that will make you smile. Rick is starting middle school along with his best friend since forever, Jeff. But as Rick gets to know some of his new classmates, he starts to realize that Jeff is a bully who he doesn’t want to hang out with anymore. He’s also wondering why he doesn’t have crushes like everyone else seems to, which leads him to the school’s LGBTQ club, where he makes new friends and finds the courage to be himself and stand up for himself. Alex Gino’s narration is buoyant, poignant, and full of all the real awkwardness of middle school. 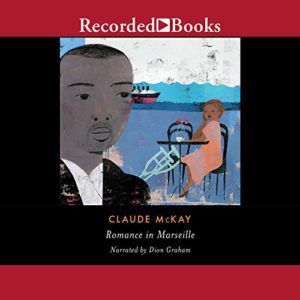 Romance in Marseille by Claude McKay, Read by Dion Graham

So this book was actually written almost 90 years ago, but it wasn’t published until this year. It’s completely unlike any of the other books on this list, but it’s well worth the read, both because of its historical importance as a forgotten work of the Harlem Renaissance, and because it’s a great story. Set in Marseille in the 1920s, it follows Lafala, an African man who loses his legs after stowing away on a transatlantic ship, wins a lawsuit against the shipping company, and spends his days cavorting with the dockworkers, prostitutes, radicals, and sailors of working-class Marseille. Dion Graham’s narration is lively and brisk; he brings the eclectic cast of characters to life with his voice. 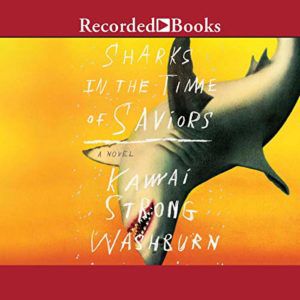 This is a gorgeous epic about two generations of a Hawaiian family struggling to survive amidst economic collapse. Their story centers around one of the sons, Nainoa, who is rescued from the ocean by sharks as a young boy, and grows up with healing powers. But it’s about so much more than his story—it’s a book about complex familial relationships, what makes a place home, love and heartbreak, friendship, the legacies of colonization and trauma, self-discovery. The characters leap off the page, and the audio narration is stunning. Four narrators voice each of the four POV characters and every performance is a triumph.

Something to Talk About 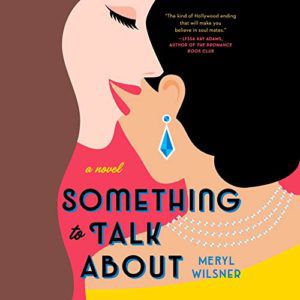 by Meryl Wilsner, Read by Xe Sands and Jorjeana Marie

Set in Hollywood, this delightful love story about a showrunner and her assistant begins when a red carpet picture of them together sends rumors flying. This is a slow burn romance. And when I say slow burn, I mean sloooow. But it’s worth it! And it’s even more worth it because of the fantastic narration. Xe Sands and  Jorjeana Marie are two of my all-time favorite narrators, and they’re both at the top of their game here. Don’t be afraid of the slow burn; these two narrators make every moment of this book a joy to listen to.

The Sound of Stars 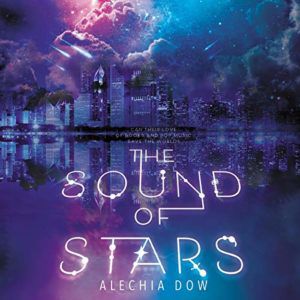 by Alechia Dow, Read by Joy Sunday and Christian Barillas

In this engaging sci-fi story, a teenage girl who risks her life to provide her people with books and an alien who’s fallen in love with human music team up to prevent disaster. In a world controlled by the ruthless alien Ilori, Ellie lives in an apartment building with other human captives and fights back against the regime by keeping a secret library. When she meets Morris, a lab-made Ilori raised to have no emotions, they form a bond that eventually leads them on a dangerous mission to try and save the planet. Two very different narration styles elevate this book—Sunday is emotional and alive as Ellie, whereas Barillas’s voice is almost toneless, reflecting Morris’s struggle to allow himself to feel.