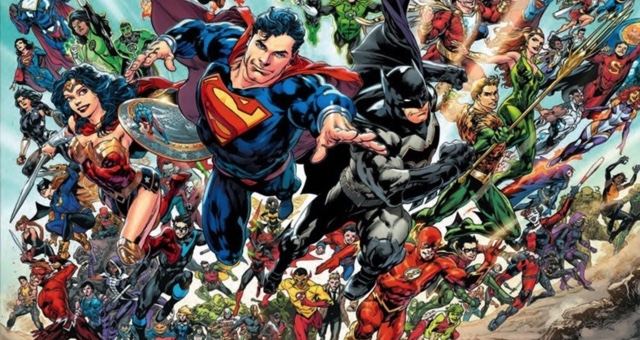 Superheroes are great for a lot of things, but no matter how much they brood, they can’t seem to stay too serious for too long, which is why superhero puns are so so great.

With their strange mythologies and quirky, complicated story lines, you just can’t be too serious about your fandom, no matter which of the multiverses you hail from.

Superman once fought against a dragon called Flame-Dragon! The X-Men once battled inside the computer, then went to Pizza Hut! Donna Troy of the Titans started as a younger version of Diana Prince for the spinoff comic Wonder Girl! It’s fine!

And, well, bless the internet. Because this comics tradition of embracing the wackiness has spilled over into a totally unapologetic culture of superhero puns. Like. Really terrible superhero puns. But you know you chuckle when you see them, and you’re totally part of the problem.

(Also check out these book puns.)

So let’s just give into it and enjoy, shall we?

1. Clark Kent is a real do-gooder. After work, he moonlights as the food pantry volunteer hero known only as Souperman.

2. What is Black Panthers favorite day of the week? Caturday.

4. Where does Black Panther stay when he’s in New York? His wakondo.

5. Why did Wonder Woman stop checking her email? Her inbox was loaded with Spamazons.

6. What does T’challa put on his hot dog? Wakandaments.

8.  What did Black Panther say when he called Captain America? Can you hear meow?

9. . What do you call it when Batman skips church? Christian Bale.

11. Why was Thor avoiding his brother Loki? He Odin money.

12. If Iron Man and Silver Surfer teamed up, they would be alloys.

13. What does Peter Parker say when people ask him what he does for a living? Web designer.

14. Why shouldn’t you race the Black Panther? He’ll kick your Ocelot!

16. What’s the difference between Batman and a robber? Batman can go into a store without Robin.

17. What do you call it when Iron Man does a cartwheel? A ferrous wheel.

18. Why did Spider-Man join the swim team? Because he had webbed feet.

21. What would Luke Cage’s name be if he were a wizard? Luke Mage.

22. What do you call it when Peter Quill has nothing to do? Star-Bored.

23. When is it bad luck for a Black Panther to follow you? When you’re a bad guy.

24. Have you heard of The Incredible Hulk’s new fashion line? It’s all the rage.

26. What did Batman do when he went shopping? Got ham.

27. Where is the home of Spider-Man in the 21st Century? The World Wide Web.

29. What does Batgirl wear to bed? Her Dark Knight gown.

30. Who was Black Panther looking for? The purr-petrator.

31. If I could be any superhero, I think I’d be Aluminum Man. My superpower would be foiling crime.

35. Why doesn’t Batman have supervision? His parents died.

36. What type of car does Marvel’s Black Panther drive? A T’Challanger.

37. What do you call it when Spider-Man is involved in a love triangle? A tangled web.

39. Why don’t the people of Wakanda like to shop online? They prefer a cat-alogue.