Bad Blood: Secrets and Lies in a Silicon Valley Startup by John Carreyrou is the shocking true story of Elizabeth Holmes, an American business woman who founded Theranos. The problem with Theranos? It’s a company founded on a product that never worked. If you and your book club have chosen this nonfiction book as your next book to discuss, you’ll have a lot of material to work with. This story is still very relevant in the news, with updates still coming out all the time. Additionally, a film version of the book is in the works, starring Jennifer Lawrence and directed by Adam McKay. Still unsure of where to start your book club discussion? Here’s your reading guide and Bad Blood book club questions to get the conversation going. 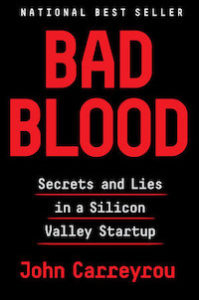 In 2015, Forbes named Elizabeth Holmes the youngest and wealthiest self-made billionaire in America, valuing her company Theranos at around $9 billion. Then, only a year later, Forbes revised their estimation of Holmes to be worth absolutely nothing. But how did she go from $9 billion to nothing?

In late 2015, Wall Street Journal journalist John Carreyrou began investigating Theranos’s claims to be able to run a wide range of lab tests using a small amount of blood. He quickly found that Holmes and her company had likely deceived many investors with false or exaggerated claims about the accuracy of Theranos’s blood-testing technologies.

By 2018, the U.S. Securities and Exchange Commission had charged Elizabeth Holmes with fraud. A trial is set to begin in the summer of 2020.

John Carreyrou’s Bad Blood is the book-length exposé of Elizabeth Holmes and her company Theranos. While exposing the shocking truth behind the Theranos scandal, Carreyrou’s book also raises questions of business ethics in Silicon Valley. In addition, one cannot ignore the role gender politics played in Elizabeth Holmes’s rise and fall. These topics make for excellent book club discussions that will have your group thinking about the implications of the Theranos story long after your meeting has ended.

Here are just a few Bad Blood book club questions to get the conversation going. But you will likely be thinking about Elizabeth Holmes and the Theranos scandal long after the book club discussion has ended.

What To Read Next: Keeping Up With The Elizabeth Holmes Story

Bad Blood is truly only the beginning of Elizabeth Holmes’s story. As we know, this story is still developing. How can you keep up with all of the latest news? The Independent has a page dedicated to all of the new coming out about Holmes and the upcoming trial. Additionally, Crunchbase aggregates all of the information coming out about Theranos.

Looking for more great true crime reads for your book club (or just for yourself)? Check out this list. Or maybe you just want to read more nonfiction? We’ve got a list of 50 of the best nonfiction books for you right here.