Winter is here, but The Winds of Winter release date? Well, that’s another story.

Trying to foretell the coming of the sixth book in George R.R. Martin’s A Song of Ice and Fire series has become an annual ritual. Which is why you are here reading this post and why I myself have written it. (It’s nice to be a part of tradition, isn’t it?)

So as we wind down 2019, the year that brought us an ending to the series courtesy of HBO’s Game of Thrones adaptation, let’s take stock of what we know and what we don’t know about The Winds of Winter release date. 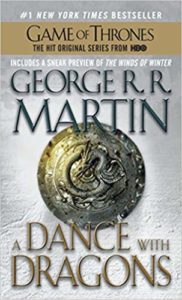 The (Latest) Potential The Winds of Winter Release Date

“When’s the next Game of Thrones book coming out?”

It’s the question that haunts us all. There was a time when Winds of Winter release date discourse involved months and calendar years. But it’s been eight years since the release of A Dance with Dragons, and, well, we of the realm have moved past the concept of “dates.”

Time is a construct and is not particularly useful when discussing the existence of The Winds of Winter.

The closest thing we have to a date for book six comes courtesy of the good people of New Zealand. To mark the Game of Thrones series finale in May 2019, airline Air New Zealand extended an invite to Martin for a relaxing visit/writing retreat to the country so he could finish The Winds of Winter.

The author’s reply? He’s already got plans to be in New Zealand for the World Science Fiction Convention in summer 2020. And if he hasn’t finished the book by then, the Kiwis are welcome to imprison him.

Assuming Martin wants to avoid lockup in New Zealand, we can circle next summer as a potential release window. But other than that broad promise, the author has stayed relatively mum—as of late—in regard to release date expectations.

In October of this year, Martin sat down with NPR for a rare interview. He offers some interesting notes on craft and the world of A Song of Ice and Fire, but when it comes to The Winds of Winter, well, the discussion gets a little more vague.

(As an aside, please stop heckling the man so he will give more interviews.)

Prior to that October interview, the last public comment from Martin on his forthcoming book (that I’m aware of) was a May 20 blog post, tied to the finale of Game of Thrones. In that post, he reiterated the eventual coming of winter (and spring):

“THE WINDS OF WINTER is very late, I know, I know, but it will be done. I won’t say when, I’ve tried that before, only to burn you all and jinx myself…but I will finish it, and then will come A DREAM OF SPRING.”

Further Speculation About The Winds of Winter

Those are the facts, and yet, an exact The Winds of Winter release date eludes us. So now comes the shameless, speculative detective work.

In a Nov. 18 blog post, Martin discussed his yearly trips to New York, which include meetings with publishers, editors, and “colleagues at HBO.” Assuming those same meetings occurred on this year’s trip, it seems likely the the long-anticipated continuation of a best-selling series came up in conversation.

If you’re inclined to see conspiracy in the world, you’ll want to cross-reference this blog post with a viral November 25 tweet from the account for the Game of Thrones TV series, which read, simply, “Winter is coming.”

In all likelihood, it’s a seasonal marketing tweet trying to keep momentum going for the newly announced Targaryen-focused spinoff series House of the Dragon. But then again, that tweet arrived merely a week after the Martin blog post discussing New York meetings—meetings that may have involved HBO representatives.

So maybe that social media manager knows something we don’t.

What We Know About Book 6

When it comes to The Winds of Winter, it’s neither feast nor famine. Martin has doled out little morsels of content on his website (some of which he’s since removed), at conventions, and in other readings and appearances.

In total, 11 chapters have been released in some form, and you can find a running list of them on the A Song of Ice and Fire reddit community. (It’s worth noting that the last released chapters are from May 2016, so who’s to say if they’re all still in the current draft of the book?)

Assuming, however, those 11 chapters make it into the finished novel, The Winds of Winter will feature (at least) the following POV characters:

The strong representation of the Iron Islands and Dorne in the released chapters are reminders that the path forward for the books will be significantly different than the show’s, even if both stories eventually end in the same place.

Regardless of the plot, we know the concluding books are going to be looong. In his May 20 blog post, Martin said he expects The Winds of Winter and the subsequent A Dream of Spring to fill at least 3,000 manuscript pages—and probably more.

All of this, of course, is reading portents, and it may be of limited comfort to those who’ve plowed through Game of Thrones read-alikes already. Cross your fingers for next summer’s Worldcon, folks. It’s our next best hope.

We won’t know anything for sure about The Winds of Winter until it’s in our hands. But there’s one thing we do know: You can stay up-to-date on all upcoming book releases with our New Releases Index, available to Book Riot Insiders. Try a demo, start a trial, or sign up today at insiders.bookriot.com.