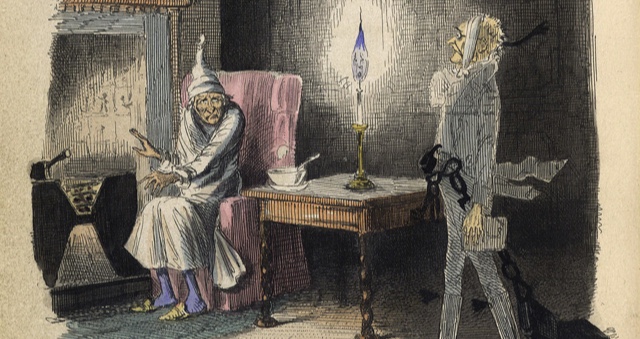 A recent close rereading of Charles Dickens’s A Christmas Carol had me realizing just how brilliant and prescient Charles Dickens was. If the reader ignores the dated language of 176 years ago, these scenes of societal neglect and systemic poverty are written for today. 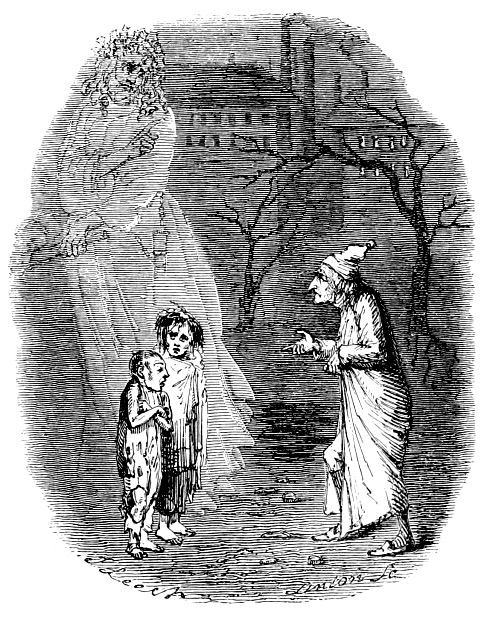 Ignorance and Want from John Leech’s original illustration of the first edition of A Christmas Carol published in 1843.

Perhaps the most chilling revelations from A Christmas Carol is the acknowledgement from London’s wealthy (and not so wealthy) citizenry to perceive themselves as very fine people by ignoring those less fortunate. After all, they work hard for their money and the poor deserve their fate—a strong sentiment at work today.

However, Dickens did provide a solution to this apathy towards those suffering from hunger and pain in plain sight: empathy. Another quality in need of resurrection in today’s culture as it was in Dickens’ Victorian London. Besides solving the brutal consequences of systemic poverty—the hunger, disease and whittling away of the human spirit—the comfortable English citizens needed to realize that they could also find themselves sharing the plight of the poor.

These six passages illustrate Dickens’ work to expose the neglect and poverty of the time:

They were a boy and girl. Yellow, meagre, ragged, scowling, wolfish; but prostrate, too, in their humility. Where graceful youth should have filled their features out, and touched them with its freshest tints, a stale and shriveled hand, like that of age, had pinched, and twisted them, and pulled them into shreds. Where angels might have sat enthroned, devils lurked, and glared out menacing.

Scrooge started back, appalled. Have them shown to him in this way, he tried to say they were fine children, but the words choked themselves, rather than be parties of a lie of such enormous magnitude.

“Spirit! are they yours!” Scrooge could say no more.

“They are Man’s,” said the Spirit, looking down upon them. “And they cling to me, appealing from their fathers. This boy is Ignorance. This girl is Want. Beware them both, and all of their degree, but most of all beware this boy, for on his brow I see that written which is Doom, unless the writing be erased.”

“Have they no refuge or resource?” cried Scrooge.

“Are there no prisons?” said the Spirit, turning on him for the last time with his own words. “Are there no workhouses?”

“He’s a comical old fellow,” said Scrooge’s nephew, “that’s the truth; and not so pleasant as he might be. However, his offenses carry their own punishment, and I have nothing to say against him.”

“I’m sure he is very rich, Fred,” hinted Scrooge’s niece. “At least you always tell me so.”

“What of that, my dear!” said Scrooge’s nephew.  “His wealth is of no use to him. He don’t do any good with it. He don’t make himself comfortable with it. He hasn’t the satisfaction of thinking—ha, ha, ha!—that he is ever going to benefit us with it.”

“At this festive season of the year, Mr. Scrooge,” said the gentleman, taking up a pen, “it is more than usually desirable that we should make some slight provision for the Poor and destitute, who suffer greatly at the present time. Many thousands are in want of common necessaries, hundreds of thousands are in want of common comforts, sir…a few of us are endeavoring to raise a fund to buy the Poor some meat and drink, and means of warmth. We choose this time, because it is a time, of all others, when Want is keenly felt, and Abundance rejoices.”

“I wish to be left alone,’ said Scrooge. “Since you ask me what I wish, gentlemen, that is my answer. I don’t make merry myself at Christmas and I can’t afford to make idle people merry. I help to support the establishments I have mentioned-they cost enough; and those who are badly off must go there.”

“It is required of every man,” the Ghost returned, “that the spirit within him should walk abroad among his fellow-men, and travel far and wide; and if that spirit goes not forth in life, it is condemned to do so after death. It is doomed to wander through the world, and witness what it cannot share, but might have shared on earth, and turned to happiness.

“Forgive me if I am wrong. It has been done in your name, or at least in that of your family,” said Scrooge.

“There are some upon this earth of yours,’ returned the Spirit, ‘who lay claim to know us, and who do their deeds of passion, pride, ill-will, hatred, envy, bigotry, and selfishness in our name, who are as strange to us and all our kith and kin, as if they had never lived. Remember that, and charge their doings on themselves, nor us.”

The air was filled with phantoms, wandering hither and thither in restless haste, and moaning as they went. Every one of them wore chains like Marley’s Ghost; some few  (they might be guilty governments) were linked together; none were free. Many had been personally known to Scrooge in their lives. The misery with them all was, clearly, that they had sought to interfere, for good, in human matters, and had lost the power for ever.