Social media was aflutter last week when Beverly Jenkins announced that Forbidden, the first novel in her Old West series, had been optioned by Sony Pictures Television in a first look deal via the Ripped Bodice partnership that was announced last year.

I can finally share this: Beverly Jenkins's FORBIDDEN, in which, a determined free-born black woman goes West and is drawn into a dynamic relationship with a man whose success and power conceal dangerous secrets, to Sony Pictures Television. 1/2

This is the first official deal that has been made since the partnership between The Ripped Bodice and Sony Pictures Television was established in 2018, and I literally jumped up and down at my desk when I saw.

While properties that have been optioned could take years to reach fruition, this was obviously a Big Ass Deal. (In both the industry sense and the more colloquial one.) Beverly Jenkins is a household name in romance. A trailblazer in her field, she published her first historical romance in 1994 and has been giving us amazing, well-researched romances (historical and contemporary) starring Black protagonists and other people of color for the past 25 years. It’s right and good that she would be the first creator to benefit from this partnership between The Ripped Bodice and Sony Pictures Television. Especially on the heels of the independent adaptation of her romantic suspense novel Deadly/Sexy. That movie, directed and born from an idea by Black romance author Iris Bolling, did not get a big cinematic distribution, but is available to rent or buy through Amazon. 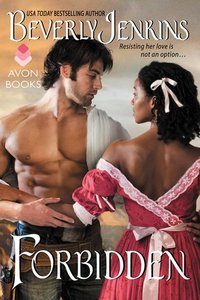 Forbidden is the first in a series of three books about Eddy, who at the start of the story is near death from exposure and thirst in the Nevada desert, and Rhine, the white-passing businessman who nurses her back to health. The pair don’t get along immediately, and along with their own developing relationship, the two have to individually figure out what they want from life. I would love to see the series not only continue the story into Breathless and Tempest, but also maybe give us some background via Through the Storm, which was most of our introduction to Rhine Fontaine and his sister Sable. (And then, why not just add the whole LeVeq family to the bunch and keep it going for-e-ver.)

Like I said, this is a big deal. And will hopefully open the door for more Black-created properties—especially in romance; Reluctant Royals, anyone?—to be optioned for film and television. While we have more visibility in some circles, the number of Black authors and other authors of color being traditionally published is disgustingly small. The same can be said for romantic movies of all kinds, but especially romantic comedies and period film. Just look at the newest adaptation of Emma with what appears to be its all-white cast (especially since the only thing we’ve wanted in an Austen adaptation since Brandon Tyler’s twitter thread has been Persuasion starring Ruth Negga and Idris Elba). Or the most recent film with a protagonist of color that was purported to be a romantic comedy…and then turned out to not follow romcom convention. But this news, on top of the casting news from the Shondaland production of Julia Quinn’s Very White Bridgertons series, brings more hope for POC representation in historical romantic film and television in the future. We love to see it.

I’m looking forward to hearing more news about the show as it makes its way into development. So far, we don’t even know what network it would be released on—and since I have no idea how television actually works, I don’t even know what the options are. Do they produce a pilot and then pitch it to Netflix and Amazon? Do they push it to one of their affiliates and say “you’re airing this”? Either way, I’m excited to see Reconstruction-era Black folk striving and surviving. And if they keep it going into the other books in the series, I look forward to delighting in a historical depiction set in the foothills of the Catalina mountains, which I’m looking at as I type this. There’s so much history that we don’t get to see on television, and this is a great start. And it’s happy. I mean, yes, Rhine, Eddy and their families have to deal with some serious horrors in the post–Civil War West. But they also get to fall in love, to have rich, fulfilling lives, and to be a part of a community that is rarely depicted on any size screen.

But please, for the love of kissing, cast a white-passing Black actor as Rhine.