Mental illness is a difficult thing to put into words, let alone draw. Yet having another medium to work in has provided cartoonists and writers with expanded possibilities for representing these difficult experiences, with comics about mental illness.

There’s no shortage of more comprehensive lists of comics that explore mental illness. But below are some of the graphic novels and memoirs giving accounts of how it feels to live with a mental illness. Most of these comics about mental illness are at least partly autobiographical, giving the stories a sense of authenticity. 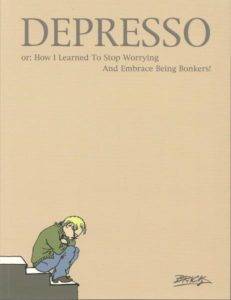 Depresso, or: How I Learned to Stop Worrying and Embrace Being Bonkers! by Brick

This semi-autobiographical account about living with depression is a surprisingly entertaining read. This is partly due to the author’s self-deprecating humor, and partly to the whimsical illustrations, notably a giant lizard who acts as the protagonist’s guardian angel. Depresso is stuffed with small, believable details about the everyday experience of persistent melancholy. One example is the toll it takes on relationships.

Swallow Me Whole by Nate Powell

Swallow Me Whole is a searing book about teenagers becoming increasingly untethered to reality. It’s confusing, but so are experiences of mental illness. The book makes effective use of the graphic novel form. Some pages are entirely given over to dreamlike images, and are more powerful for that. It’s a common feeling, the adolescent sensation of being misunderstood and alienated, but Swallow Me Whole shows extreme versions of these feelings.

Possibly the most celebrated graphic text to substantively tackle mental illness is Alison Bechdel’s memoir about her relationship with her father, Fun Home. Fun Home explores Bechdel’s queerness as well as her obsessive-compulsive disorder. And her relationship with therapy is later explored in depth in Are You My Mother? A Comic Drama. (But my favorite Bechdel work is the long-running comic strip Dykes to Watch Out for. This is an affectionate look at a close-knit community of progressive queer folks reshaping notions of family. It showcases Bechdel’s humor more straightforwardly than the graphic memoirs.) 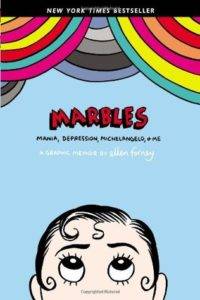 Marbles gets a lot of things right about living with bipolar disorder, from the frustrating, years-long search for the right combination of medications and dosages, to the seductive appeal of mania. It combines the author’s own struggle with bipolar with more general information about the disorder. So it can be read as both memoir and introductory non-fiction text. Plus, the images are, well, imaginative, with distinct drawing styles that show the distinct phases of mania and depression.

I Am a Hero by Kengo Hanazawa, Kumar Sivasubramanian, Philip R. Simon and Steve Dutro

I’ve only read the first chapter of this long-running manga series, so I haven’t gotten to the zombies. But the opening of I Am a Hero, with its sole character and its claustrophobic apartment setting, skillfully lays out the delusions and paranoia besetting this would-be hero. It calls to mind the film Repulsion, but in modern-day Japan rather than swinging London.

Lighter Than My Shadow by Katie Green

This is an affecting memoir of a struggle with eating disorders. A black cloud hovers around Green on nearly every page, adding to the narrative’s sense of ongoing distress. Lighter Than My Shadow is a counter to anyone who believes that getting over anorexia is simple. As the young Green says during one tense family dinner, “You try and eat with a monster in your head screaming at you not to!” The book shows how Green’s embattled relationship with food intersects with her obsessive-compulsive disorder, adding up to an oppressive desire for perfectionism and control.

What are your recommendations for comics about mental illness? Check out all of our comics coverage here.