We can hardly contain ourselves, we’re so thrilled about Book Riot contributor Adiba Jaigirdar’s debut YA novel! Lucky for us, we get to reveal the cover for Jaigirdar’s The Henna Wars. And don’t forget to check out the excerpt below: 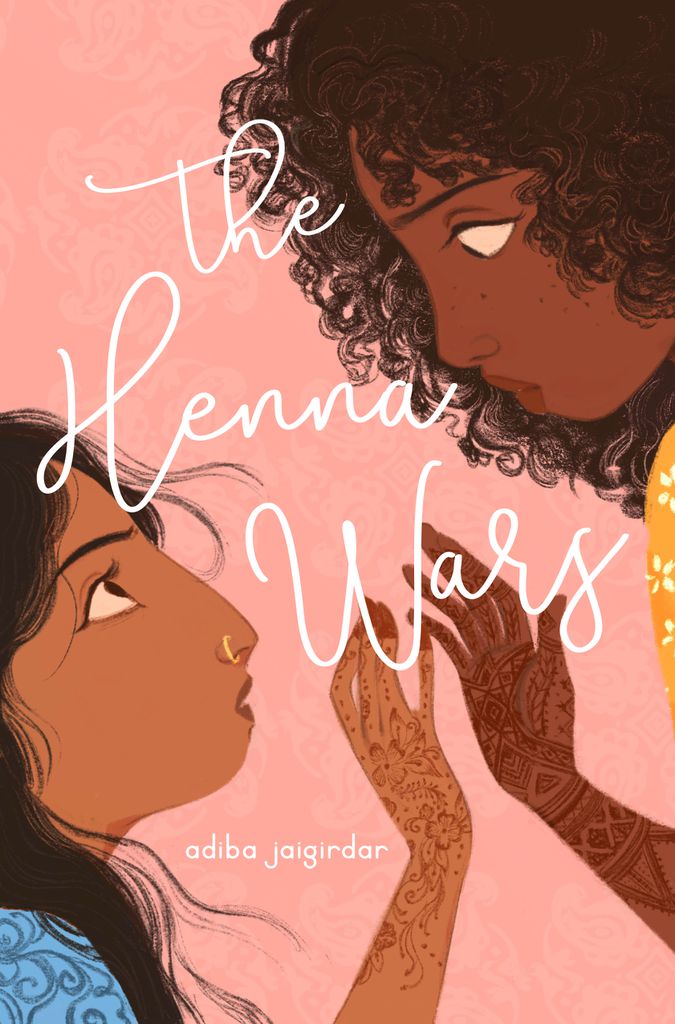 When Nishat comes out to her parents, they say she can be anyone she wants—as long as she isn’t herself. Because Muslim girls aren’t lesbians. Nishat doesn’t want to hide who she is, but she also doesn’t want to lose her relationship with her family. And her life only gets harder once a childhood friend walks back into her life.

Flávia is beautiful and charismatic and Nishat falls for her instantly. But when a school competition invites students to create their own businesses, both Flávia and Nishat choose to do henna, even though Flávia is appropriating Nishat’s culture. Amidst sabotage and school stress, their lives get more tangled—but Nishat can’t quite get rid of her crush on Flávia, and realizes there might be more to her than she realized.

I decide to come out to my parents at Sunny Apu’s engagement party.

Not because of Sunny Apu and her groom, or the buzz of the wedding in the air. And not because everything about a Bengali wedding is so palpably heterosexual that it’s almost nauseating.

I decide to come out because of the way Ammu and Abbu look at Sunny Apu, with a mixture of pride and love and longing. It isn’t directed at Sunny Apu at all, really; it’s directed at the future. At our futures, mine and Priti’s. I can almost see Ammu and Abbu stitching it together in their heads: Castles in the air, made of deep red wedding saree dreams and lined with thick gold wedding jewellery aspirations.

I’ve never thought of my parents as traditionalists before this. I’d seen them as pioneers, people who made things happen even when those things might seem impossible. They’d broken rigid tradition, and have what Bengalis call a “love marriage.” Though they’ve never told us the story, I always imagine a movie-moment meeting, exactly like in a Bollywood movie. Their eyes meet across a crowded room, maybe at a wedding of distant relatives. Ammu’s in a saree, Abbu in a sherwani. Suddenly, a song starts in the background. Something romantic, but upbeat.

My parent’s “love marriage” is one of the reasons they work so well here, despite the lack of family and support. Without anything, really. They uprooted their lives one day to come to Ireland. To bring us here. To give us a better life, they said, even when in some ways they are stuck to the past. To Bangladesh. To everything Bengali custom tells them.

Unfortunately, one of those things is this: a wedding consisting of a bride and a groom.

But my Ammu and Abbu did make it past the customs that told them love before marriage was unacceptable, and that love after marriage was to be hidden in a locked bedroom like a shameful secret. So maybe—just maybe—they can accept this other form of love that blooms in my chest sometimes when I see Deepika Padukone in a Bollywood movie, and not when I see her male love interest.

So that is how I spend Sunny Apu’s engagement, trying to construct the perfect coming out moment, and wondering if that even exists. I try to think back to every movie, TV show, book that I’ve ever seen or read with gay protagonists. Even gay side characters. Each coming out was tragically painful. And they were all white!

“What are you doing?” Priti asks when she spots me typing into my phone in the midst of the engagement ceremony. Everyone’s eyes are turned to the bride and groom to be so I thought this was the moment I could Google “gay happy endings” without someone peering over my shoulder.

I quickly slip the phone into my bag and shoot her a wide-eyed, innocent smile.

“Nothing. Nothing at all.”

She narrows her eyes like she doesn’t believe me, but says no more. She turns back to the bride and groom to be.

I know Priti will try to talk me out of it if I tell her what I’m thinking of doing. But I also know I can’t be talked out of it now.

I can’t keep living a lie. I have to tell them at one point or another.

And tomorrow is going to be that point.

It’s weird, but after I’ve made my decision I feel like I’m on borrowed time. Like this is our last day together and something is about to break open between us. When we’re driving home, it’s past midnight. The streetlights cast a strange glow on the road ahead, marred by the bright, full moon in front of us. It’s a clear night, for once. Priti is dozing in the backseat beside me. Ammu and Abbu are speaking in a low hum, so I can barely understand what they’re saying.

I wish I could bottle this uneventful moment—a flash of time when we’re all at peace, together and apart at once—and keep it with me forever.

I wonder if this is what things will be like tomorrow too, after I’ve told them.

But then the moment’s over and we’re home and stumbling out of the car. Our churis jingle against each other, sounding too loud and bright in the dead-of-night quiet on the streets.

Inside, I strip my face of all the heavy makeup Priti carefully dabbed onto it just hours before. I slip out of my itchy, uncomfortable salwar kameez and bury myself in my blankets, where I pull up Google again and translate the word lesbian into Bengali.

The next morning, Priti flits off to her best friend Ali’s house with a smile on her lips. She’s promised to tell Ali every detail she can about the engagement party, and the upcoming wedding. With pictures.

There are still a few hours until Abbu has to leave for the restaurant, so it’s the perfect time, really. I take my time making my morning tea, stirring especially slowly and going over the words I practiced last night. They seem lackluster and silly now.

“Ammu, Abbu, I have something to tell you,” I finally say, trying to breathe normally but somehow forgetting how breathing works.

They’re sitting at the kitchen table with their phones in their hands, Abbu reading the Bengali news, and Ammu scrolling through Facebook—so reading the Auntie news/Bengali gossip.

“Yes, shona?” Abbu says, not bothering to glance up from his phone. At least my momentary breathing amnesia isn’t obvious.

I stumble forward, nearly spilling my tea, and somehow make it to the chair at the top of the table.

“Ammu, Abbu,” I say again. My voice must sound grave because they finally look up, twin frowns on their lips as they take me in, trembling hands and all. I wish all of a sudden that I had spoken to Priti. That I’d allowed her to talk me out of it. I am, after all, only sixteen, and there’s still time. I’ve never had a girlfriend. I’ve never even kissed a girl, only dreamed of it while staring at the cracks on my ceiling.

But we’re already here and my parents are looking at me with expectation in their eyes. There is no turning back. I don’t want to turn back.

Ammu frowns. “Okay, that’s good, Nishat. You can help your Khala with the wedding.”

“No, I’m…” I try to remember the word for lesbian in Bengali. I thought I had committed it to memory, but clearly not. I wish I’d written it on my hand or something. Like a cheat sheet for coming out.

“You know how Sunny Apu is going to marry Abir Bhaiya?” I try again.
Ammu and Abbu nod, both looking equally bewildered by the turn this conversation is taking. I’m right there with them if I’m being perfectly honest.

“Well, I think in the future I won’t want to marry a boy at all. I think I’ll want to marry a girl instead,” I say lightly, like this is a thought that just popped into my head, not something I‘ve spent years agonizing over.

There’s a moment when I’m not sure they understand, but then their eyes widen, and I can see realization settling into them.

I expect something. Anything.

Anger, confusion, fear. A mixture of all of those things, maybe.

But Ammu and Abbu turn to each other instead of me, communicating something through their gaze that I don’t understand at all.

“Okay,” Ammu says after a beat of silence passes. “We understand.”

Ammu’s frown and the chill in her voice suggests anything but understanding.

I stand up, though it feels wrong. Like a trap.

The mug of tea burns into my skin as I grab hold of it and carry it upstairs, stealing glances back the whole way up. I’m waiting—hoping—for them to call me back. But there’s nothing except silence.

Sign up for What's Up In YA? to receive all things young adult literature.
Thank you for signing up! Keep an eye on your inbox.
By signing up you agree to our Terms of Service
#LGBTQ#Young Adult Literature#cover reveal#excerpt