I am writing to you out of concern. After reading your story first with my entire junior kindergarten class and then three more times with small groups, I feel that I know you better than any other anthropomorphic barnyard animal and can offer you some advice. Your story made me madder than a wet hen! You allowed a cat, a dog, and a goose to lounge around your house while you planted, harvested, ground, and baked wheat into bread. The animals refused to help, you did all of the work yourself, and then, very deservedly, ate the bread all by yourself while your roommates gazed at you longingly. 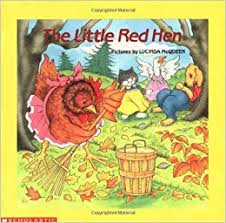 Yes, your story teaches children that they must work hard to succeed. But, it also shows them that they can spend their days sleeping, gossiping, and combing their own whiskers without any consequences other than missing out on a slice of bread. Little Red Hen, in the words of that goddess Lizzo, “Got to take a deep breath, time to focus on you.”

First, it is time to drop “Little” from your name. When I think of little, I do not think of fictional characters who are especially strong or self actualized. Little Bo Peep somehow managed to misplace her entire flock of sheep. Little Red Riding Hood was so dense that she did not notice that a wolf stole her Grandmother’s identify. Even the Little Drummer Boy peaked as a child when he played the same three notes over and over on his drum. I have not heard any hits from the former child star now called Big Drummer Man.

Second, I suggest that you go by “Red.” Red is a power color. Think fire, Wonder Woman, and Julia Robert’s dress in Pretty Woman. Have you seen Orange is the New Black? In this show, about inmates at a women’s prison, one of the characters is named Red. She shares your love of baking and eating. Channel some of her persistence and authority and her ability to hen-peck those around her. Skip the episodes in which she becomes obsessed with catching and breading a chicken. You and I are working on a free range chicken vibe, not a fried chicken vibe.

Third, it is time to discuss the elephant in the room, or, should I say, the cat, dog, and goose in the room. According to your story, the animals live in your house and spend their days sleeping, gossiping, and preening. In one illustration, the dog slumbers in a hammock with a whole glass of spilled milk pooling underneath the hammock. In the words of a very observant 4-year-old, “That Little Red Hen is just going to let him sleep while she gets a paper towel to clean up that spill.”

You are the enabler! Help those animals help themselves! Set up a chore chart, create LinkedIn profiles for your unemployed menagerie, or simply threaten to move them to the SPCA unless they start paying rent. Don’t chicken out, Red, tell those animals you are no longer their Mother Hen.

Finally, pursue your passion. Somehow, you know more about baking than Paul Hollywood. Perhaps you could open a bakery. You could sell your bread to a farm-to-table restaurant that has the word “Kitchen” in its name. Why not film yourself and apply to be on The Great British Baking Show? Your grit and expertise make you a shoo-in for winning bread week and you look amazing in an apron. You could even chat with the water fowl that wander around outside the tent between challenges.

Red, I hope to some day read a sequel to your story. Maybe you could call it Red: The Chicken Who Flew the Coop and Did It All Herself.