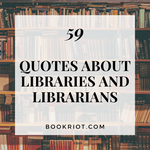 The intersection between book lovers and library lovers is a big one. Whether we see libraries as magical places or as just one of the simpler pleasures in life, there is no shortage of nice things to be said about the spaces and those who safeguard those hallowed spaces. Whether you’re looking for the perfect line to tattoo on your body or wish to bask in the lovely warm feelings that are these institutions, this collection of 59 quotes about libraries and librarians will lift and inspire you.

59 Quotes about Libraries and Librarians

Libraries allow children to ask questions about the world and find the answers. And the wonderful thing is that once a child learns to use a library, the doors to learning are always open. —Laura Bush

[Librarians] are subversive. You think they’re just sitting there at the desk, all quiet and everything. They’re like plotting the revolution, man. I wouldn’t mess with them. —Michael Moore 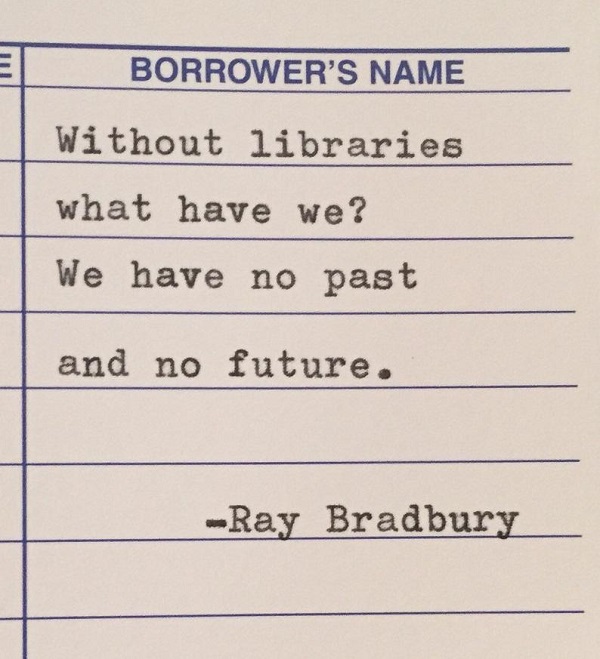 Without libraries what have we? We have no past and no future. —Ray Bradbury

Schools and libraries are the twin cornerstones of a civilized society. Libraries are only good if people use them, like books only exist when someone reads them. —Nicholas Meyer

When the going gets tough, the tough get a librarian. —Joan Bauer

The message is clear: libraries matter. Their solid presence at the heart of our towns sends the proud signal that everyone—whoever they are, whatever their educational background, whatever their age or their needs—is welcome. —Kate Mosse

People can lose their lives in libraries. They ought to be warned. —Saul Bellow 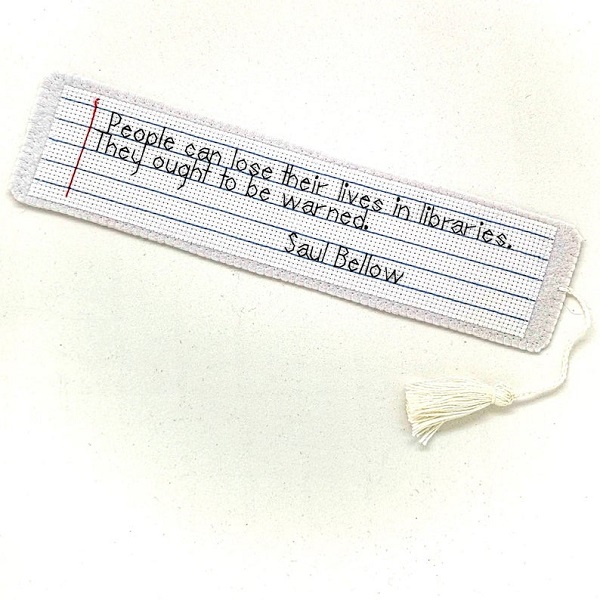 Hand embroidered bookmark with a quote of Saul Bellow by EasyToMakeDesigns

Heroes to me are guys that sit in libraries. They absorb knowledge and then the risks they take are calculated on the basis of the courage it took to become replete with knowledge. —William Hurt

I am what libraries and librarians have made me, with little assistance from a professor of Greek and poets. —Heraclitus

Learning sleeps and snores in libraries, but wisdom is everywhere, wide awake, on tiptoe. —Josh Billings

Librarians are hideous creatures of unimaginable power. And even if you could imagine their power, it would be illegal. It is absolutely illegal to even try to picture what such a being would be like. —Joseph Fink

Libraries are reservoirs of strength, grace and wit, reminders of order, calm and continuity, lakes of mental energy, neither warm nor cold, light nor dark. —Germaine Greer

Well-run libraries are filled with people because what a good library offers cannot be easily found elsewhere: an indoor public space in which you do not have to buy anything in order to stay. —Zadie Smith

Libraries are where it all begins. —Rita Dove

Librarian is a service occupation. Gas station attendant of the mind. —Richard Powers

Libraries are where we learn that we can live our lives through books. —Kevin Barry

One can never have too many librarian friends. —Jennifer Chiaverini

Libraries are the one American institution you shouldn’t rip off. —Barbara Kingsolver

Libraries can take the place of God. —Umberto Eco

After all, it’s the librarian’s sworn purpose to bring books together with their one true reader. —Kate Morton

Libraries are the ultimate restaurants for brain food. I sleep better knowing there are libraries. I would take a bullet for a librarian. —Simon Van Booy

To a historian libraries are food, shelter, and even muse. —Barbara W. Tuchman

Never argue with a librarian; they know too much. —Carole Nelson Douglas 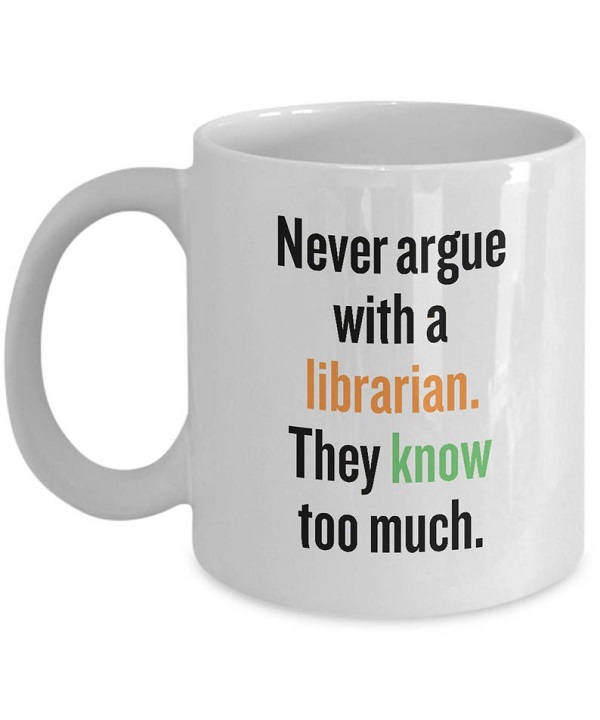 I love libraries, as anyone who has a brain does. —Elizabeth Berg

Public libraries were a huge source of comfort and joy for me when I was growing up. I still spend time there. —Hong Chau

Good librarians are natural intelligence operatives. They possess all of the skills and characteristics required for that work: curiosity, wide-ranging knowledge, good memories, organization and analytical aptitude, and discretion. —Marilyn Johnson

Libraries are the backbone of our education system. —Karin Slaughter

I think libraries give the feeling that people are there to work. It’s a little bit like an artist’s colony in the sense that there’s some sort of shared experience. There’s respect for quiet, more or less, but otherwise, there’s activity. —Stephen McCauley

I remember visits to the local libraries and getting my own library card as things of rite-of-passage significance. —Richard K. Morgan

Librarians save lives: by handing the right book, at the right time, to a kid in need. —Judy Blume

I count myself as one of millions of Americans whose life simply would not be  the same without the libraries that supported my learning. —Scott Turow

To be a librarian is not to be neutral, or passive, or waiting for a question. It is to be a radical positive change agent within your community. —R. David Lankes

Libraries are not made, they grow. —Augustine Birrell

I have always imagined that Paradise will be a kind of library. —Jorge Luis Borges

Libraries were full of ideas—perhaps the most dangerous and powerful of all weapons. —Sarah J. Maas

A great library contains the diary of the human race. —George Mercer Dawson

If you have a garden and a library, you have everything you need. —Cicero 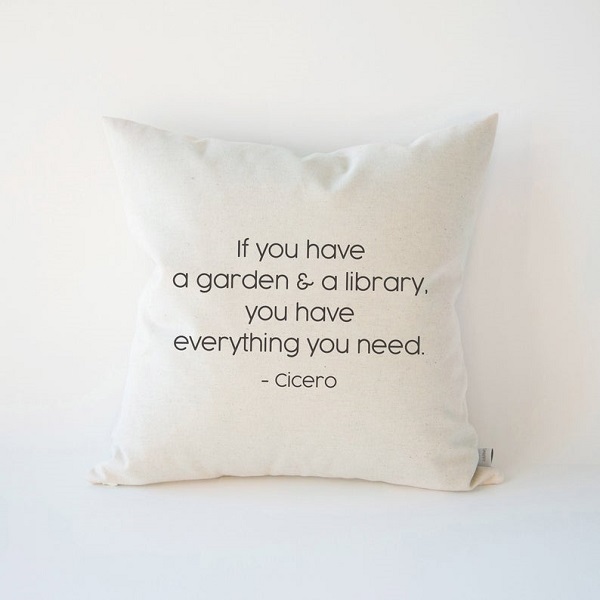 If You Have a Garden… by TheHarmonyHouse

Libraries always remind me that there are good things in the world. —Lauren Ward

Whatever the cost of our libraries, the price is cheap compared to that of an ignorant nation. —Walter Cronkite

To build up a library is to create life. —Carlos María Domínguez

The library is inhabited by spirits that come out of the pages at night. —Isabel Allende

If you want to get laid, go to college. If you want an education, go to the library. —Frank Zappa

When I discovered libraries, it was like having Christmas every day. —Jean Fritz

The very existence of libraries affords the best evidence that we may yet have hope for the future of man. —T. S. Eliot

Walking the stacks in a library, dragging your fingers across the spines—it’s hard not to feel the presence of sleeping spirits. —Robin Sloan

When I got [my] library card, that was when my life began. —Rita Mae Brown

A library is infinity under a roof. —Gail Carson Levine 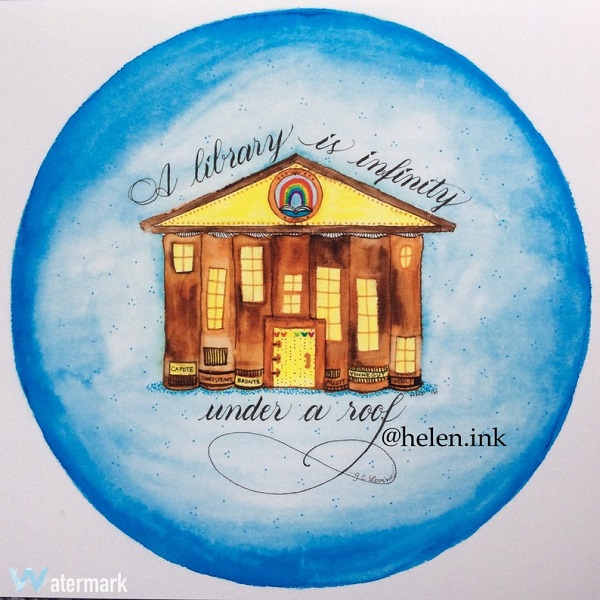 Dear me, how I love a library. —Elizabeth Gilbert

We may sit in our library and yet be in all quarters of the earth. —John Lubbock

What in the world would we do without our libraries? —Katharine Hepburn

My two favorite things in life are libraries and bicycles. They both move people forward without wasting anything. The perfect day: riding a bike to the library. —Peter Golkin

If your library is not “unsafe,” it probably isn’t doing its job. —John Berry

Libraries are places where the damaged go to find friends. —Tamora Pierce

I was made for the library, not the classroom. The classroom was a jail of other people’s interest. The library was open, unending, free. —Ta-Nehisi Coates

And I like libraries so much that I married a librarian. —James A. Michener