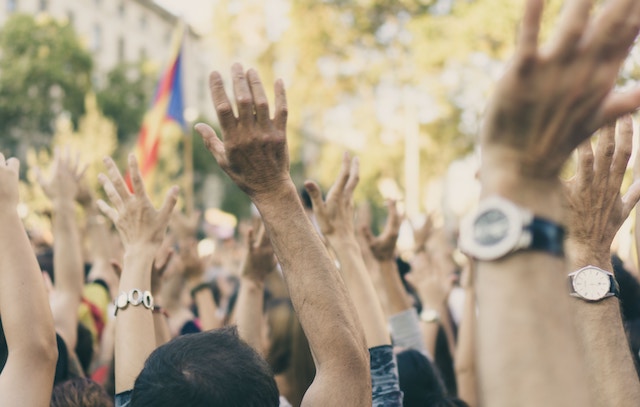 The strike of the Chicago Teachers’ Union may have come as news to viewers watching SNL last week. But school in the Second City has been closed since Monday, October 21st. Over 32,000 teachers and staff are marching to demand full staffing, pay raises, and smaller classes. They’re also requesting an increase in support staff, including school librarians.

Chicago’s public schools have labored under budget cuts for several years. Throughout Chicago Public Schools (CPS), there remain only 108 school librarians, down from 454 in 2013. There are 600 schools in CPS total, meaning that not all were staffed with a librarian even before they lost staff. At this point in time, most CPS public schools are without library media specialists. Teachers have picked up the slack, functioning as de facto library aides in districts where there is no librarian. These duties stand in addition to the ones that they already shoulder on a day-to-day basis, including making their own increasingly meager budgets stretch far enough to cover their students’ needs.

View this post on Instagram
Category ID: 45597
Check Your Shelf Newsletter
Sign up to receive Check Your Shelf, the Librarian's One-Stop Shop For News, Book Lists, And More.
Thank you for signing up! Keep an eye on your inbox.
By signing up you agree to our terms of use

Time In The Classroom

Additionally, CPS library staff are known for spending time in the classroom. On top of her duties as a library media specialist, Brenda García teaches five library classes every day. Her other duties include locating enough money to keep library services at her workplace, Frank W. Reilly School, active. Grants and book sales help, but don’t fully fund the library.

Unsurprisingly, librarian cuts follow economic lines. CPS schools that have retained librarians are generally located on the North side of the city, which rages economically from stable to affluent. Many of the schools that now have no librarian are located on the poorer South and West sides. These neighborhoods include large minority populations.

Lack of school library services exacerbates a lack of services for low-income youth that has pushed teacher concerns to the boiling point. García describes unwalkable neighborhoods where public libraries are inaccessible to elementary- and middle school–aged kids because of distance or danger from highways.

This is late but I went to the #cpsstrike2019 strike the first day downtown and it was really cool. I got to learn a lot about what’s going on and honestly it makes me sick. #chiraq is in it for the long run💁🏽‍♂️💯‼️

Even if public library buildings themselves were better distributed, many of these streets would still be too dangerous for children to travel alone because of their high crime rates. Kids in these neighborhoods, García explains, often have parents who work long hours. The public libraries are closed by the time they get out of work, so visiting isn’t a good option. The school libraries may be the only place these kids can realistically access books.

Access to books is a crucial factor in children’s success and health as adults. Low income children tend to own fewer books than middle class children, making libraries an especially crucial resource for them. School librarians often function as the gatekeepers for these kids, giving them access to current and particularly helpful books in addition to a positive reading role model.

The CTU is, in part, striking for more school librarians. But the state of the collections is also worrying, as budget cuts have shrunk collection development money in the poorest districts. This isn’t a problem that the strike will solve, but it’s an easier one to overlook. No library collection, no matter how badly battered, will ever pick itself up and march through the streets on a picket line. The rejuvenation of CPS librarians is only one piece of a puzzle that also must include more money for new books, new materials, and possibly extra staff training and recruitment. The same problems of homogeneity, monolinguism, and class conformity that plague all libraries present a stark problem in the diverse CPS system. Brenda García is one of the only Spanish-speaking Latina library workers in the entire CPS.

CPS librarians play an active role in guiding state educational initiatives. Book award selection committees, for example, include school librarians. They are crucial for ensuring that the state promotes representative books, not to mention books that are useful to a public school curriculum. Public librarians, even those operating in diverse areas, may not have the luxury of seeing the immediate intersection between what the public school system can provide and what the kids need. School librarians get a front row view of what kids lack, and therefore what kids need, in their educational system.

CPS librarians teach literacy skills that teachers aren’t necessarily equipped for. Esme Raji Codell, for example, teaches her kids to read commercials and spot fake news. Critical thinking skills are part of that essential toolbox that includes how to sew on a button and how to handle a saw. Codell points out that shop and home economics classes are also gone the way of the big budget, to our collective detriment. Even graduates, flung suddenly into a rough world, may turn back to their school librarian for aid. García relates the story of a recent grad who asked her knitting questions.

The strike explicitly described librarian cuts as part of its justification and a critical point in its negotiations. However, both García and Codell agree on two things: that negotiations are coming to a head, and that librarians probably won’t be a significant priority when CTU and the city strike a deal.

“At this time in negotiations, it appears that CPS is refusing to commit to language that would ensure school libraries for every child in Chicago,” Codell said. “It’s tricky, because with 108 libraries, most people don’t know what they are missing, so it’s hard to advocate.”

This is despite the fact that the Chicago Teachers’ Union’s (CTU) 40-person negotiating team includes a librarian. On Monday, the city of Chicago reached a tentative deal with support workers represented by SEIU.

Having the strike as a platform has done much to raise the profile of CPS librarians. García has spearheaded the creation of the #CPSNeedsLibrarians hashtag on Twitter, leading to increased awareness of school librarian roles by Chicago aldermen. García hopes that this will increase the likelihood that next year’s budget will include room for more school librarians. But that’s nowhere near a sure thing. As her district gentrifies, the number of kids attending public school dwindles. She’s watching her district shutter both buildings and libraries due to lack of funding. Of the original three libraries at her workplace, only one is still active.

Right now, she’s using whatever resources are at her disposal to continue to bring quality services to her school, its teachers, its kids, and their parents. These activities often compromise her own salary and her own time. She has taught database classes to teachers and parents after school, conscious of the fact that nobody would be paid for this extra labor and time.

But the response to these programs has been worth it.

The databases that the CPS provides are game-changers for teachers and parents alike. García’s ability to focus on information resources in her pedagogy is valuable for everyone. Codell describes part of the library teacher’s job as the instruction of other instructors. Without an information professional, there’s no reason that regular teachers would necessarily know how to use a specialized database—or even that it exists.

After the 2012 CTU strike, Codell lost her library aide and half of her preparatory periods. Chicago’s history with its public school librarians is spotty, but so is CTU’s. A strike may not save the library workers of the Chicago Public School System. Competence, extra hours, and valuable skills haven’t stopped the city from reducing its school librarian retinue to a quarter of its previous power. But library staff in Chicago public schools perform services that teachers simply can’t replace. Removing them helps to ensure that kids won’t thrive as adults. This is especially true in areas where parents can’t make up for anemic city funding with donations and purchases of school swag. Advocacy remains one of the last hopes for librarians in this embattled system. Let’s hope it’s enough.

Read up on Chicago in 100 Must-Read Books in and About Chicago, as well as YA books set in Chicago.

Surprised that social justice figures so prominently in school libraries? Don’t be! Read up and wake up with our Woke Reading Guide for White People.