So listen, I’m pretty lucky with my local comic shop (Shout out to Comic Envy in Asheville for being the BESSSST.) But I know everyone doesn’t have an awesome local store like I do. Man, I’ve definitely had a couple of bad experiences. So here’s what a couple of Book Riot contributers would like to tell all comic book stores, because hey, we like being nerds and spending money on comics. 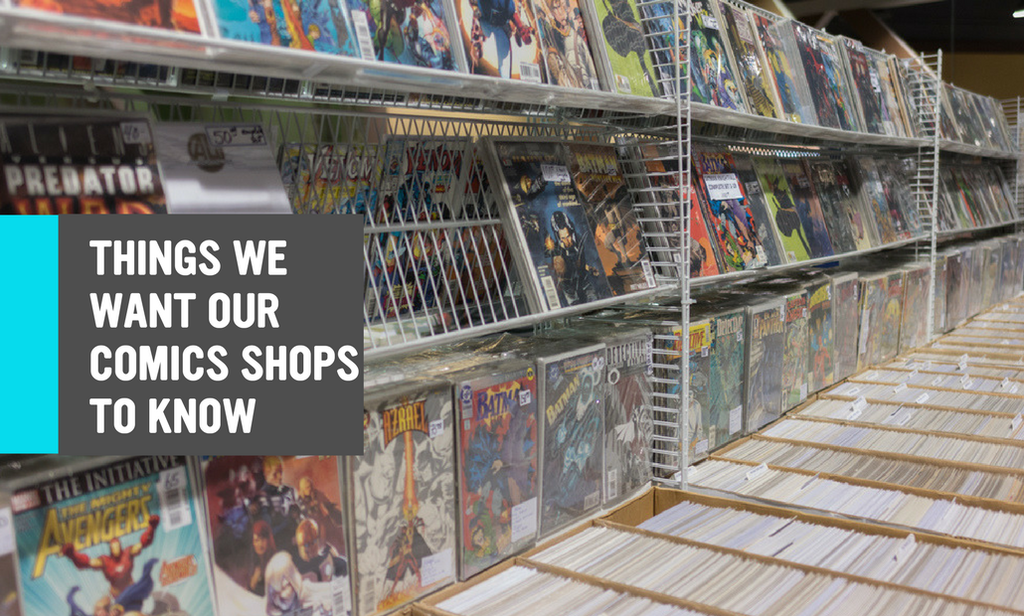 1) Don’t just promote straight white dude centered and written comics.I think every time there is a lady-led comic, it gets put in our folder with a heyy, heyy, you may like this. Most of the time we do, which is why our folder is so big if we forget to pick them up for two weeks (I’M SORRY; WE WILL GET THEM I SWEAR). That’s actually how I found out about Mockingbird-because my local shop told me about it. Also notable is that when I go in on a Wednesday, someone will be talking about why it matters that Power Man and Iron Fist is actually being written and penciled by black creators.  More stores should do this! I don’t know how many of my friends have said, “Well, my store doesn’t stock this or talk about it so I didn’t know.”  Dude, that is a loss. There are people that want these comics, but they may not know and that is money you are missing out on, my friends (Sonja P)

2) I sympathize with my LCS, I really do: they’re not in the best location and based on the staff turnover, they aren’t making money hand over fist. So while I could rant about some of their pricing decisions, I won’t. Instead, what I would really love is if they could up the quality control. There have been numerous times where I’ve discovered something left out of my pulls, something I’ve never read added to my pulls, or on one occasion actually been charged for a book that was missing. I get it, pulls are complicated and mistakes happen, but they seem to happen a lot, even if they’re always friendly and helpful when sorting things out after the fact. (Charles Paul Hoffman)

3) Yo, comics shop, how ‘bout you actually stock the stuff I want to read? Like, I appreciate all the trades of Neil Gaiman’s Sandman and Matt Fraction’s Hawkeye that I was able to get from you, and you’re doing a great job keeping Spider-Gwen and Batgirl on the shelves. But there’s so much more to comics than superheroes and Image. If I can get Frank Miller to state on the record that he enjoys manga other than Lone Wolf and Cub, will you get my trashy shoujo comedies on the shelves? Why can’t I find anything from Will Eisner, the dude that the comic-book Oscars are named after? Where’s Lynda Barry, Tom Gauld, and Moebius? That one time I found an Adrian Tomine book shoved in the back rack didn’t satisfy me. I’m not a superhero comics fan, or an American comics fan – I’m a comics fan, without any qualifiers. Take a page out of our local board game shop’s playbook and diversify your audience. (Megan Cavitt)

4) LCS, there’s much that I love about you, but, please: get rid of the Trump merchandise. (Jon Erik)

5) If I walk into my local comic shop and only see white dudebros as far as the eye can see – both as customers and as the characters of the books you’re most heavily featuring – I’m going to turn around and walk out. There’s nothing more uncomfortable than literally being shown that, hey, this store doesn’t think you belong. Your loss, though: I’ll take my money to a more inclusive store, even if I have to drive two hours out of the way to do so. (Like Escape Pod Comics in Huntington, NY. I love you, Escape Pod.) (Nicole Brinkley)

6) I don’t expect my LCS to know all of the millions of comics they’ve ever circulated like the back of their hand. However, if I come in asking about a new, buzzed-about comic, the response should not be “what is that?” followed by “you can check the shelf” and finally, “I guess we don’t have it.” A comics shop should always match, if not exceed, its customers’ interest levels! We’re already personally visiting a specialty shop, so put the product in the shopper’s hand or make it clear you can and will get that product. (Thomas Maluck)

7) If you finish the sentence, “Comics are for _____” with anything other than “everyone,” then your store won’t be for me. (Thomas Maluck)

8) I want to know that my store won’t put up with harassment. I’ve definitely had some issues other places, but one of the reasons I appreciate my local store is that they go out of their way to say that behavior is not tolerated, and they welcome newbies.  After the election, they made a point to say that Comic Envy is a safe space, and would remain so, and they deeply care about making that true. Not everyone has that experience, and that sucks. Get on that, people! Make your store welcoming and friendly and more people will go. (Sonja P)

So there we have it; that’s what a couple of bookrioters want. I can say that really working on these things creates loyal and happy customers who want to spend money in your shop, so everyone wins.