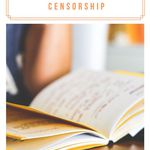 Thirty-seven percent of parents believe that sexually explicit content and nudity are acceptable reasons for the censorship of books in school. That’s one of the findings of a recent deep dive into the history of banned books in the USA and a survey of 1,000+ parents done by SuperSummary*, an online resource that provides in-depth study guides.

Censored and Banned Books By The Numbers

The American Library Association (ALA) has kept a database of book challenges since 1990, and SuperSummary looked at the titles which were challenged between 2001 and 2018. Any person can submit a challenge about any form of media, and the ALA tracks those which appear in the media and those submitted directly to them.

According to the data, 2004 was a peak year for book challenges, with 547 challenges, followed by a valley in 2005, and a peak again in 2006, with 546. Book challenges decreased between 2010 and 2016 (except for 2012), and they’ve been rising again since. Books about LGBTQ people, and especially books by and about transgender individuals, ranked among the most commonly challenged books between 2016 and 2018, and graphic novels saw their numbers increase during this time as well. It’s hard not to see that the increase in inclusive storytelling and the increase in popularity and availability of the graphic format have led to a rise in the number of challenges during these years.

In addition to looking at the numbers of challenges per year, SuperSummary pulled out the individual titles challenged and how many years those titles have been on the list. The Harry Potter series and The Perks of Being a Wallflower were the most frequently challenged books.

More interesting, though, is seeing which authors have been most frequently challenged. Toni Morrison has seen her books challenged for 16 of the years examined, followed by Stephen Chbosky, John Green, and J.K. Rowling seeing 12 years of book challenges each.

Why and What Parents Deem Acceptable Book Censorship

Parent reactions to book challenges offers some powerful—and concerning—insight into what and why challenges are as rampant as they are.

In our current political reality, it should come as little surprise that political affiliation affects beliefs in book challenges. Roughly one-third of both Independent and Democratic identifying individuals believed book bans in schools were acceptable when necessary, while 47% of Republicans did.

But who parents believed should have the power to censor books differs more starkly; moreover, it complicates what they report about their own beliefs in book censorship. While any person can submit a challenge and it becomes recorded in ALA’s database, those surveyed believed only a handful of individuals within a school should have the power to make book ban calls. 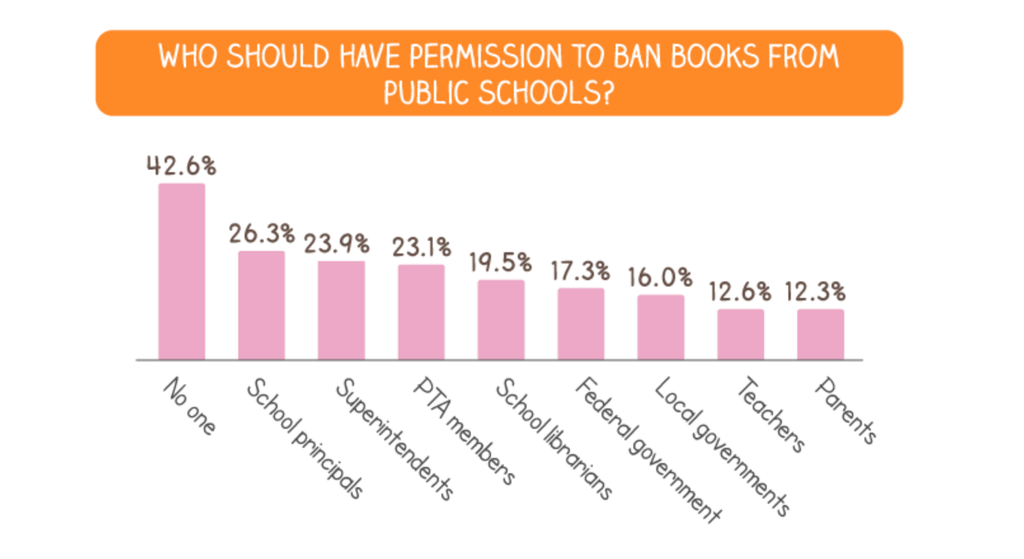 Most parents believed that no one should have the power to ban books from public schools. But pressed to determine who is most empowered to make those decisions, school principals, superintendents, PTA members, and school librarians topped the list, with teachers and parents at the bottom.

Compared to their belief in censorship for other media, though, books fall low on the list for parents. Social media, video games, and movies earn more favor for censorship. This could be because parents see books in a category that differs from social media or movies—as being educational, as opposed to for entertainment only. 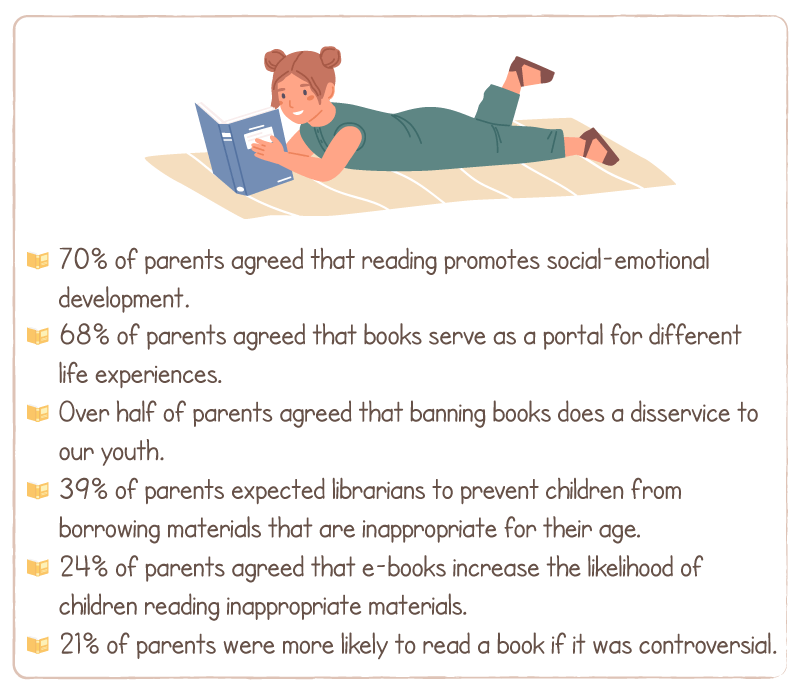 That said, 37% of parents agreed with censoring book content and 22% said they weren’t sure how they felt.

The majority of parents (62%) surveyed believed that a rating system for books, like those for movies and other media, would be valuable. Parents would find a system that rates the levels of a book’s sexual explicitness, nudity, Satanism, or discussions of suicide and drug use useful. They are far less concerned about violence—a key aspect of rating systems for visual media. Only 23% of parents believed violence needed to be censored, as opposed to 53% saying the same for sexual explicitness.

Yet another 22% of parents believed that no content should be censored in schools. 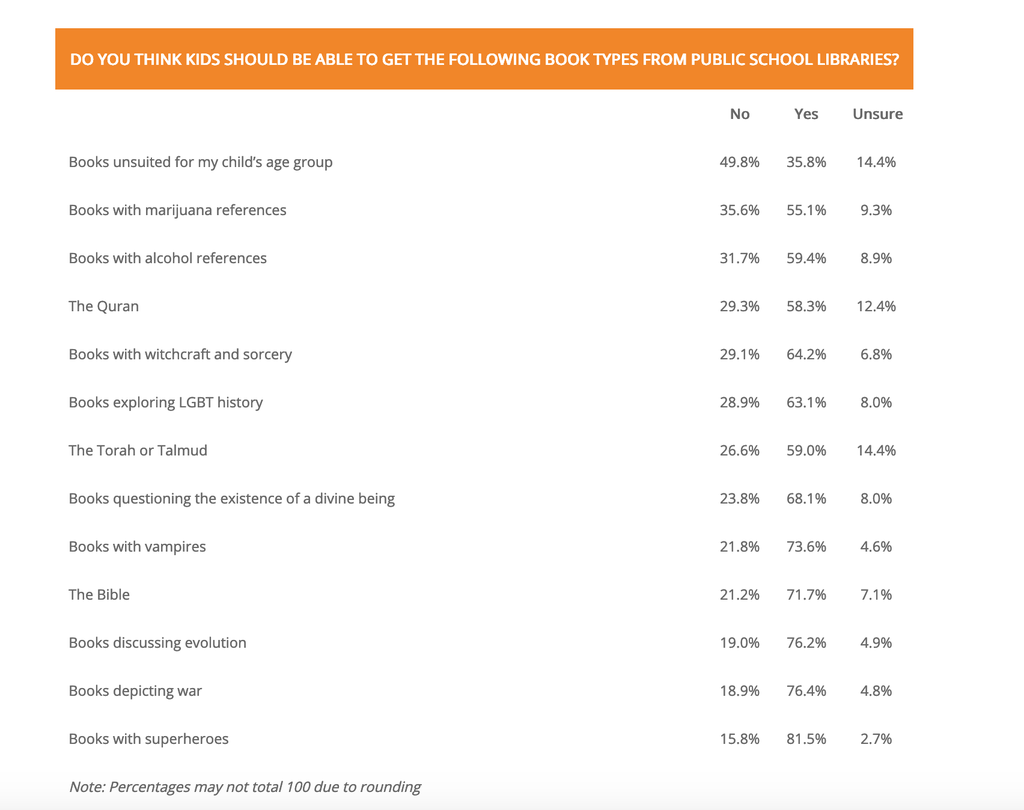 When it comes to books available in a public school library, books unsuited for a child’s age group were least supported, followed by books with marijuana references, books with alcohol references, and The Quran.

The bulk of parents were okay with challenged books being made available to their readers, suggesting that while over a third agree with the idea of censoring books, it’s possible that same percentage are those unlikely to be okay with their children reading those books. Put another way, most parents don’t agree with censorship and are also not concerned about their children reading challenged books.

But the challenged books parents are comfortable allowing their children to read highlight something more noteworthy: as a book becomes more well-known, be it because of its cultural influence or the length of time on a most challenged list, the more likely they are okay with the book being read. Harry Potter, The Adventures of Huckleberry Finn, To Kill A Mockingbird, and the Captain Underpants series top the list of banned books parents are comfortable with their children reading.

But What Does It Mean?

The survey results do a disservice a bit in conflating book challenges, censorship, and book banning. The ALA database covers book challenges, which don’t always result in a book ban. Censorship is a giant term and could mean anything from blacking out words or passages from books to making a book completely unavailable or more quiet and dangerous forms of censorship, such as gatekeepers purposefully choosing not to include a book in libraries or curriculum because of their own disagreement with it (or fear of what they might experience were they to have the book available). Quiet censorship is especially rampant when it comes to inclusive literature.

One of the limitations of SuperSummary’s study is the language of how we talk about and discuss sensitivity topics. When book challenges are brought public—either via the media or via the database ALA keeps—there are terms used to describe why the book is a problem, but those terms all mean different things to different people. What does it mean for a book to be “sexually explicit” or for it to depict “nudity?” Those definitions are in the minds of every individual and there’s no single consensus for them.

What does it mean for a book to be inappropriate for a child’s age and how does that relate to the school library? Any librarian working in a school library in America operates in loco parentis, meaning that they’re obligated to keep the safety of students at the forefront. This extends to the books in their collection, suggesting that school libraries already limit their materials to age-appropriate material.

Implementing a rating system for books would require a common language and belief in what appropriate language, violence, and “sexual content” mean or look like across the board. Being objective is impossible in this capacity, and even if the work were given to an outside body, like the MPAA for movie ratings, more complications would arise.

Book censorship is a reality, and for young people, it’s real and insidious. This is why inclusive books have become especially vital in recent years as more books featuring a diverse human experience have found their way to more shelf space—and why we’ve seen a rise in those books being challenged.