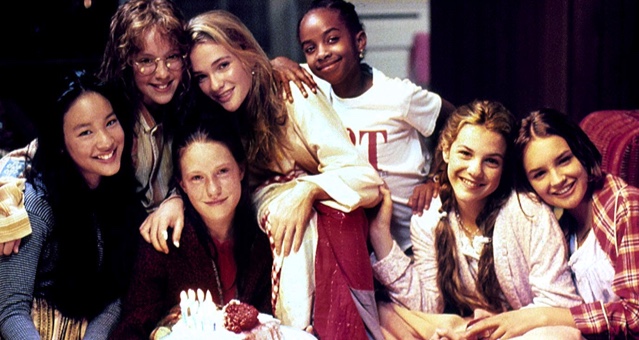 The title is a bit of a lie. This list is hardly objective and unbiased; it is, after all, basically a list of my favourite BSC books. But I have tried to insert an element of objectivity and scientific rigour to the process of making this list. There are, after all, over 200 BSC books. A lot of characters. A lot of plots, subplots, sub-series. I’m willing to bet that someone out there hates some of the books on this list, and others will be appalled that their favourites aren’t here. I’m sorry. Here is my scientifically rigorous method of whittling down 213+ books to the top Baby-Sitters Club books: I considered each sub-series separately (regular, mystery, super special) and picked out my favourites from each. I didn’t include the super mysteries, special editions, portrait collections, and friends forever books, since there weren’t a lot of them in total. And the friends forever ones don’t feel like ‘real’ BSC to me.

The regular series I divided up into early (books 1–30, since by book 30, Stacey is back in Stoneybrook for good and Mallory and Jessi are established members of the BSC), middle (books 31–69, because these are the ones where Stacey is still on best-friend terms with the BSC), middle-late (books 70–100, where the BSC is still functioning normally), and late (books 101–131, because this is where the tone of the books really changes and they are almost a different series to the books published a decade earlier).

I tried to choose the top Baby-Sitters Club books that really showcased Stoneybrook, the clients, and the baby-sitting – the books that had the BSC really involved in the town, or organising their clients into fun events. These are the elements of the BSC that I think are core to the books and part of what made it such a wonderful and long-lasting series. There is something delightful about being part of a close community and that is something hugely evident in the BSC series. I also picked out books that just had scenes that I personally adored or subplots that I personally adored, like the Mary Anne and Mallory baby-sitting subplot in Snowbound, and all the discussion about cakes and recipes in Claudia and the Recipe for Disaster. I also tried to make sure each of the main characters were somewhat evenly represented. So, without further ado, I present you my top 21 BSC books.

This is on here because it’s one of the first books where the BSC baby-sit a LOT of children, and those ones are always fun and really highlight one of the best things about the BSC: how good they are with children. I also like the focus on Kristy’s family, because her family (her mum in particular) is fantastic. 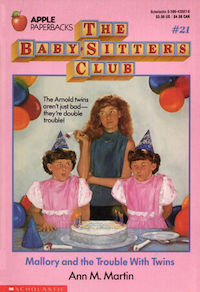 Regular series #21 Mallory and the Trouble with Twins

I love the problem-solving in this one, both with the baby-sitting dilemma and how Mallory convinces her parents to let her get her ears pierced and buy some of her own clothes. This book also has one of my favourite scenes of the series – where Mallory goes shopping with the Arnold twins.

Regular series #34 Mary Anne and Too Many Boys

The Sea City books are all pretty great, but this one is one of my favourites because of the date that Mary Anne goes on with Alex, where they end up confessing they both have boyfriends/girlfriends back home and this date they go on is just as friends. How delightfully wholesome? I also love the one mini subplot, where Kristy babysits Jackie Rodowsky and takes him to the pool. One of the best comedic baby-sitting scenes of the series.

One of the best things about the BSC is how eager they are to help others in need, and this is highlighted in this book with the massive fundraising drive they organise for some of the kids’ penpal/sister school. I also love the slumber party/pizza party that is organised at the end. I always wished I could do something like that as a kid.

I like how the focus on this isn’t baby-sitting, and kind of on the stress you have when you want to write or do your own thing but feel forced to look after young children. I really just like that Mallory gets a bit of her own voice in this, and her own space. I have two favourite scenes from this book: Mallory’s own special day where she goes to Washington Mall with Jessi, and the special day that she organises for her siblings because she realised that a day without them isn’t quite right.

This is one of the heavier BSC books, and I like that serious issues are tackled in the series. This one deals with racism and bigotry, when a new family in Stoneybrook doesn’t want Claudia or Jessi to sit for them – and in fact just wants the blonde-haired, blue-eyed baby-sitters. I also like the subplot in the book: the band/talent show that the BSC organises for the kids in Stoneybrook. 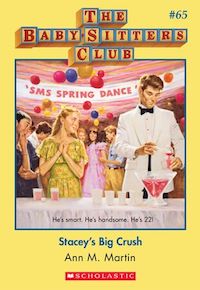 Oh man, I LOVE this book. Not for the baby-sitting, or anything particularly heartwarming, but just because I love how it so wonderfully captures the intensity of a teenage crush. I remember when I turned 22 and thinking that I was now the same age as Wes, and isn’t that old. Well, I’m more than a decade beyond that now and still reading the books…

I kind of like the books about illness (Stacey’s Emergency almost made the list) but what I actually love most about this book is the subplot: the BSC and a bunch of their clients visit residents of the nursing home with presents. It’s such a lovely and heartwarming thing. I love the scene where they go shopping for the gift baskets, where they visit Mallory with her own special basket at the end, and my other favourite scene is the Thanksgiving meal at the Pikes’ house. As a kid in Australia, this was my only exposure to Thanksgiving and for years I held it as the example of what Thanksgiving should be.

I wanted a Logan book on the list, and this is one of my favourites. I like the baby-sitting tension in this book but also how it gets resolved. There seems to be a nice interplay of adult/young adult communication and miscommunication here.

Another one of those BSC-looks-after-all-the-children-of-Stoneybrook-in-one-go books. A lot of great books are set on the Schafer/Spier property (it’s huge! they have a barn!), and this is a great one. The BSC set up a circus themed camp for their clients because why the heck not? I love the dog play that is put on at the end of the camp.

One of the more political BSC books, and I think that’s partly why I like it so much. I like the BSC standing up for their beliefs, I like learning more about Thanksgiving, and I love the Thanksgiving feast at the end.

I actually quite like Abby, despite her not being one of the original characters. She gets pretty good page time for someone who only came in at book #89. This is another fun medical one, but the reason I included it are for two reasons: the subplot with the winter festival (which sounds gigundoly fun), and the shopping trip Abby goes on for Anna.

There are a lot of Jessi dance books, and I think this one is my favourite. This book is set primarily in New York and I liked seeing Quint again, and also seeing Jessi being given the chance to grow up a little and expand her interests/friendships.

Like the previous book on this list, this is one that isn’t set in Stoneybrook, but rather at Mallory’s new boarding school. I think I like this for a similar reason as #115: it’s nice to see the junior members given the chance to grow, and Mallory really comes into her own in this book. This is probably my favourite of the later books.

A ski lodge! Snow! Baby-sitting a bunch of strange kids because that’s just what the BSC does! What a great book. I used to think all American kids got to go on fantastic school excursions like this and I was jealous.

Another great New York book. In this one we have professional art classes, a mysterious stalker, a lost dog, young love, and a fight/rivalry between BSC members. Basically a recipe that includes everything wonderful about the BSC series. 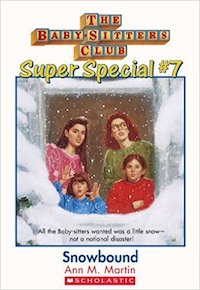 Hands down my favourite Super Special. I love every single subplot in this: getting stranded in the middle of nowhere and being rescued by a stranger, being stranded overnight at the airport, baby-sitting all the Pikes for two nights and running out of food, being stuck at a dance studio…Man. If I had to pick just one favourite BSC book (and not a top 21), I think this one would be it.

I love libraries, and I love mysteries, so it’s no surprise that this one makes the list. Mary Anne spends some afternoons volunteering at the children’s section of Stoneybrook Library, there is a reading challenge on, someone is setting fire to books. I think my love for crime fiction began with BSC mysteries. 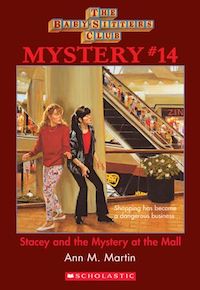 Mystery #14 Stacey and the Mystery at the Mall

Everyone at SMS has to do work experience, and the BSC members all end up with jobs at Washington Mall. I loved seeing the behind-the-scenes stuff in this, and seeing where each of the BSC members work. Retail is a lot more glamorous through the eyes of the BSC and this book. The mystery is a pretty good one too, one of the more serious ones in the books.

Mystery #16 Claudia and the Clue in the Photograph

I love this for the time we spend in the darkroom with Claudia – it’s my favourite of her art-focused books. There’s some personal bias there, because photography is my favourite art form and I spent a lot of hours in the darkroom when I was in high school. But I also love this for how much of Stoneybrook we see, mainly because of the subplot – the ‘Day in the Life of’ project that the the BSC and their clients do for Dawn. It’s such a fun idea. 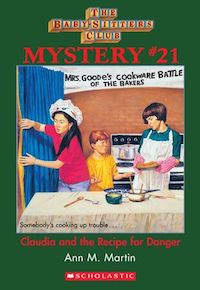 Mystery #21 Claudia and the Recipe for Danger

There’s a baking contest in Stoneybrook, and a bunch of familiar characters are contestants, including some members of the BSC. Claudia, Mary Anne, and Shea Rodowsky form our team of protagonists. I love seeing them try different recipes, reading about what the teams baked, and I also like the subplot (the non-participating BSC members run a daycare for the adult contestants with kids who need looking after). My two favourite parts of this book are the descriptions of the winning cake and the ‘restaurant’ the daycare kids start at the end. Such a fun book combining three things I love most: food, mystery, and BSC.

There you have it, my top 21 BSC books. These are the books that I think beautifully encapsulate what the BSC is, in all its warmth and cosiness and slight madness. If someone were to say to me that they have never read a single BSC book but would like to read some and can’t read the entire series, these would be the ones I would tell them to start with. And now, let me have it: which of your favourites didn’t make it onto the list?