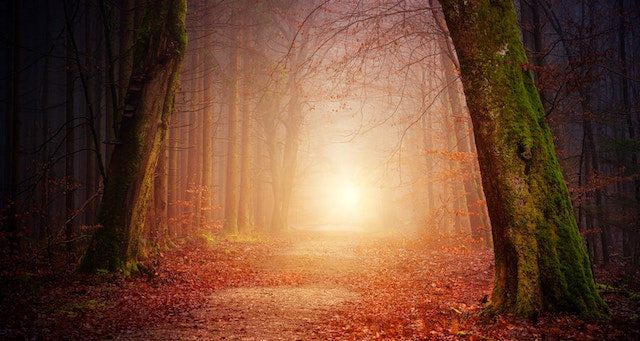 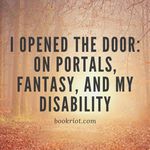 Once upon a time, I opened a door and instead of finding Narnia, I found my disability.

Once upon a time, I had a disability and it opened a door into fantasy.

Neither of these statements is completely true, but each holds tendrils of truth, wisps of it to explore and understand something a bit deeper about both my disability and my reading choices. I’ve always been curious about why people gravitate towards the type of reading that they do, how it reflects parts of their personality, or their environment as a child, or the way they acquire books. I learned something that felt like a revelation after reading two mostly unrelated books back to back.

Has that ever happened to you, where books seem to magically align in just the right order to create some kind of understanding you didn’t have before? In this case, the two books were The Ten Thousand Doors of January by Alix E. Harrow and Broken Places & Outer Space by Nnedi Okorafor. 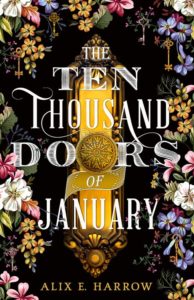 The Ten Thousand Doors of January is a magical novel where doorways to other worlds are layered upon our own. It’s set in the early 1900s, and January Scaller lives with her adoptive father in a mansion full of unique objects, archaeological finds her adoptive father collects, just as he has collected her—a mixed-race girl, as she is constantly reminded. Her biological father wanders from country to country, hunting these artifacts. When January Scaller finds a door in the midst of fields in a town her adoptive father has dragged her to, she doesn’t see how ill-fitting it is in the landscape. How improbable. How unsafe. What she sees is hope. Possibility. An adventure. She and the door are similar in all these ways. 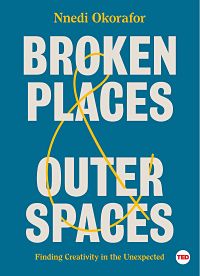 While I loved this novel for its lyricism and whimsy and just general gorgeousness, I would never have made a deeper, more personal connection with it if it weren’t for also reading Broken Places & Outer Spaces immediately afterward. In Broken Places, Nnedi Okorafor relates the true story of becoming suddenly disabled in her early college years. What was meant to be a fairly routine surgery instead left her paralyzed, a college athlete with big dreams of running professionally. Writing, at this point, had not occurred to her. As she lay in her hospital bed, she began to hallucinate alien-like bugs. She began thinking about doorways and thresholds as she descended down the “rabbit hole of pain.” When she reemerged, still broken, still disabled, she found herself drawn to science fiction, to the recreation of broken things into something even better, and to stories about her past. It’s the combination of these elements that led to her career as a science fiction author. Disability became a threshold, a portal into another world and the opportunities therein, and an entirely different aspect of herself. Her memoir is saturated with portal metaphors and reading it so soon after The Ten Thousand Doors of January made me think about the portals in my own life. And it especially made me realize that my disability and reading choices were inextricably linked, and how one became a portal for the other, and vice versa.

I first passed out in the 4th grade lunch line. My best friend Stephanie caught me. At the time, I didn’t realize what had happened. I thought I’d faked passing out because I was angry with another best friend of mine, Katie, for absolutely no reason. I have no idea why I would think these two things could possibly be connected, but that’s the narrative I told my parents, and I had no more incidents until a couple of years later when I began “falling” a lot while taking showers. At first, I said nothing to my family. But when Mom asked about my bruises, I told her I was clumsy and slipped a lot in the shower, and I believed that. It was chalked up to teenage growth spurts, though in fact, I’m quite short and pretty much stopped growing by sixth or seventh grade. The debilitating headaches I started having were attributed to hormonal migraines, and I was prescribed medicine for them. My frequent illnesses were a repercussion of having allergies. Everything had a reason.

At this time, my reading preferences began to change too. As a child, I preferred horror. I loved the delightful tingling feeling of fear, of goosebumps rising on my arms, of breath catching in my throat. Scary Stories to Tell in the Dark, Goosebumps, Fear Street, and everything Stephen King were my top reading choices, though I’ve always read a bit of everything, and I also had Sunfire Romances, American Girl books, and The Baby-Sitters Club on rotation. I read a little fantasy. The Hobbit and A Wrinkle in Time come to mind, and I enjoyed both. But fantasy wasn’t my bread and butter.

That started changing in about 7th grade, and especially by high school. I tried to continue with horror and thumbed through my mom’s books, but nothing resonated. So I turned to my dad’s bookshelves instead, packed with fantasy pocketbooks. Mercedes Lackey became a favorite, as did David Eddings, Robert Jordan, Tamora Pierce, among many, many others. I found myself identifying with the teenage protagonists of these novels, whose onset of magic left them sick for days or weeks, near death until they were finally trained in their magic. And even then, casting a spell had a cost. It left them exhausted, often bedridden. I knew the feeling.

I’m quite sure horror works in similar ways for others. In Emily Foster’s compelling essay “The Monster in the Mirror: On Horror, Disability, and Loving Both at Once,” she explains her attraction to horror as a disabled person: “It is so very gratifying, as a person who unsettles, to write unsettling characters and unsettling experiences, to rejoice in our survival when so many narratives kill us off or make us safe and tidy again.” I wish I could’ve seen horror in that way, but instead, I no longer felt the compelling need to be scared. It was an emotion that no longer interested me, and I often felt disgusted after reading one of my mom’s novels. Maybe it was a natural change in personality, and also there was a significant change in my home life at the time that could’ve affected my reading,  but I also think it was connected to the physical effects of my continuing health problems.

Instead, fantasy became the portal by which I experienced acceptance and hope as a disabled person, which is similar to January Scaller finding hope and acceptance through fantastical doorways in The Ten Thousand Doors of January, though not as a disabled person, but as a girl and woman who could never fit in and be accepted for who she was because of the color of her skin. For me, fantasy became a portal into reimagining what I would much much later find out is a chronic autonomic disorder (Postural Orthostatic Tachycardia Disorder, among other things) into something positive. I deeply identified with the protagonists in these fantasy novels. Though they suffered, their experiences of dizziness, exhaustion, headaches, etc. all stemmed from the positive force of magic running through them. I didn’t actually believe I was magical, though of course, I imagined I was. Who doesn’t? Where kids today await their Hogwarts letter, I waited for my white horse, but I knew it would never come. I was very aware of my reality, but fantasy novels showed me I could still belong.

Unlike Okorafor, I didn’t receive a diagnosis until more than a decade after my health problems began, and actually, they think something else is going on, too. Thankfully, my doctors never questioned my symptoms, which commonly happens with my particular set of health problems (and to women in general). It’s just that my doctors, in a small Tennessee town, had no idea what they were dealing with. Because it took so long to receive a diagnosis, it was very difficult for me to understand what was happening to my body. I never received an immediate moment of epiphany like Okorafor. I never said to myself while reading fantasy, “this is like me. I feel like this too.” Instead, it became a subconscious attraction, though this is conjecture. But it’s a conjecture that makes sense now, especially after reading Broken Places.

I’ve discussed before how reading fantasy made me a feminist. It makes sense then, as feminism is meant to uplift those demeaned by a patriarchal culture, that fantasy would also empower me as a disabled woman. Fantasy still has a long way to go in disability representation, and I hope to someday contribute more diverse perspectives, but it still gave courage to a preteen and teenage Margaret, struggling with something she wouldn’t fully understand for another decade, and still doesn’t fully.

Portals can lead us to places where we can be accepted, where we can fit in, where we can be our essential selves. For both Okorafor and I, disabilities became our portals, though for Okorafor they led her to science fiction, and for me fantasy. In another way, fantasy became a portal into understanding my disability as something integral to myself, and not something to be ashamed of. Similarly, January found fantastical doors as a portal into acceptance, into realizing she’s beautiful and perfect exactly the way she is. While these two books are certainly not the only books about portals with similar themes, the congruence of reading them back to back gave me a deeper understanding of myself and my reading.