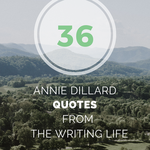 Note: Dillard’s sense of humor and perspective of the world can be sharp and dark, as the natural world often is. This collection of Annie Dillard quotes includes a mention of suicide.

Annie Dillard. It was a name I heard regularly on my college campus, our shared alma mater, during my four years there. Despite being a committed English major, I never bothered to pick up her work while in college. Even when the Theatre department put on an adaptation of her famed Pilgrim at Tinker Creek, I did not rush to the library or the bookstore to pick up a copy. In fact, I didn’t even see the production, feeling it was akin to seeing the movie before reading the book. Once I graduated, I got wrapped up in the job hunt and then working. I was reading more for pleasure than I had while in college, but the books I chose weren’t very literary. I needed a break from it all. So it wasn’t until a decent amount of time later that, homesick for our college and desperate to find any way back to it, I picked up Pilgrim at Tinker Creek and walked into the world of Annie Dillard quotes.

I was utterly enchanted, even though it was so far outside what I typically read and enjoyed, even when  I did pick up things on the more literary end of the prose spectrum. Since then, I’ve slowly chewed on her other work, not wanting to gobble it down, but to savor it. I realized at some point that part of my 10th grade English syllabus included an excerpt of her An American Childhood, and it felt like fate. I got another taste of her work with The Abundance. And, recently, I sat down with The Writing Life, having inherited it, along with a boxed collection of Dillard, from a great aunt. 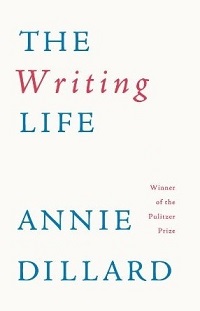 In The Writing Life, I found Dillard as quotable as ever. She was poignant in the most basic ways, by which I mean she somehow captured the root or the simplicity of lofty subjects. She distills her thoughts like a fine, earthy whisky, making the result both easy to go down but complex enough to swish around the tongue before swallowing. And her writing continues to leave an imprint on me in ways I’m told happen when one reads, but that have not ever actually occurred to me outside of Dillard. Even as I stack these words on top of each other, I can see her fingerprints all over the paragraphs above. It’s an unusual and wonderful thing for me.

While reading The Writing Life, I took a new approach to deep reading in hopes that it would better burn the book into my brain. My copy is now dotted with sticky flags designed to look like adorable animals (a few bears and almost all of the frogs). And I kept running notes on a separate piece of paper which, when I reshelve the book in my collection, I plan to fold and tuck between the endpapers for easy access in the future.

But what good does marking the best, juiciest, most ah-ha parts of the book do me, really? Sharing, after all, is caring. And I care for you, dear reader.

“The line of words is a hammer. You hammer against the walls of your house. You tap the walls, lightly, everywhere. After giving many years’ attention to these things, you know what to listen for. Some of the walls are bearing walls; they have to stay, or everything will fall down. Other walls can go with impunity; you can hear the difference. Unfortunately, it is often a bearing wall that has to go. It cannot be helped. There is only one solution, which appalls you, but there it is. Knock it out. Duck.”

“You can waste a year worrying about it, or you can get it over with now. (Are you a woman, or a mouse?)”

“So it is that a writer writes many books. In each book, he intended several urgent and vivid points, many of which he sacrificed as the book’s form hardened.”

“Something completely necessary [in your writing] is false or fatal. Once you find it, and if you can accept the finding, of course it will mean starting again. This is why many experienced writers urge young men and women to learn a useful trade.”

“Putting a book together is interesting and exhilarating.”

“There are many manuscripts already—worthy ones, most edifying and moving ones, intelligent and powerful ones. If you believed Paradise Lost to be excellent, would you buy it? Why not shoot yourself, actually, rather than finish one more excellent manuscript on which to gag the world?”

“Out of a human population on earth of four and a half billion, perhaps twenty people can write a book in a year. Some people lift cars, too. Some people enter week-long sled-dog races, go over Niagara Falls in barrels, fly planes through the Arc de Triomphe. Some people feel no pain in childbirth. Some people eat cars. There is no call to take human extremes as norms.”

“On plenty of days the writer can write three or four pages, and on plenty of other days he concludes he must throw them away.”

“A pile of decent work behind him, no matter how small, fuels the writer’s hope, too; his pride emboldens and impels him.”

“Fiction writers who toss up their arms helplessly because their characters ‘take over’—powerful rascals, what is a god to do?—refer, I think, to these structural mysteries that seize any serious work, whether or not it possesses fifth-column characters who wreak havoc from within.”

“Sometimes part of a book simply gets up and walks away. The writer cannot force it back into place. It wanders off to die.”

“The written word is weak. Many people prefer life to it. Life gets your blood going, and it smells good. Writing is mere writing, literature is mere. It appeals only to the subtlest senses—the imagination’s vision, and the imagination’s hearing—and the moral sense, and the intellect.”

“You do not like filmed car chases? See if you can turn away. Try not to watch. Even knowing you are manipulated, you are still as helpless as the male butterfly drawn to painted cardboard.”

“Even when passages seemed to come easily, as though I were copying from a folio held open by smiling angels, the manuscript revealed the usual signs of struggle—bloodstains, teethmarks, gashes, and burns.”

“This night I was concentrating on the chapter. The horizon of my consciousness was the contracted circle of yellow light inside my study—the lone lamp in the enormous, dark library.”

“How we spend our days is, of course, how we spend our lives. What we do with this hour, and that one, is what we are doing. A schedule defends from chaos and whim. It is a net for catching days…A schedule is a mock-up of reason and order—willed, faked, and so brought into being; it is a peace and a haven set into the wreck of time; it is a lifeboat on which you find yourself, decades later, still living. Each day is the same, so you remember the series afterward as a blurred and powerful pattern.”

“There is no shortage of good days. It is good lives that are hard to come by.”

“Often, [Jack London] slept through the alarm, so, by his own account, he rigged it to drop a weight on his head. I cannot say I believe this, though a novel like The Sea-Wolf is strong evidence that some sort of weight fell on his head with some sort of frequency—but you wouldn’t think a man would claim credit for it.”

“‘I understand you’re married,’ a man said to me at a formal lunch in New York my publisher had arranged. ‘How do you have time to write a book?’

“Thoreau said that his firewood warmed him twice—because he labored to cut his own. Mine froze me twice, for the same reason.”

“Many writers do little else but sit in small rooms recalling the real world. This explains why so many books describe the author’s childhood. A writer’s childhood may well have been the occasion of his only firsthand experience.”*

“Why people want to be writers I will never know, unless it is that their lives lack a material footing.”

“There was a tiny range within which coffee was effective, short of which it was useless, and beyond which, fatal.”

“Many fine people were out there living, people whose consciences permitted them to sleep at night despite their not having written a decent sentence that day, or ever.”

“Brian said (admiringly, I thought), ‘Did you write that story?’ I started to answer, when he continued, ‘Or did you type it?’”

“But you are wrong if you think that in the actual writing, or in the actual painting, you are filling in the vision. You cannot fill in the vision. You cannot even bring the vision to light. You are wrong if you think that you can in any way take the vision and tame it to the page. The page is jealous and tyrannical; the page is made of time and matter; the page always wins. The vision is not so much destroyed, exactly, as it is, by the time you have finished, forgotten. It has been replaced by this changeling, this bastard, this opaque  lightless chunky ruinous work.”

“The work is not the vision itself, certainly.”

“Write as if you were dying. At the same time, assume you write for an audience consisting solely of terminal patients.That is, after all, the case.”

“Writing every book, the writer must solve two problems: Can it be done? and, Can I do it?”

“Every book has an intrinsic impossibility, which is writer discovers as soon as his first excitement dwindles.”

“Push it. Examine all things intensely and relentlessly. Probe and search each object in a piece of art. Do not leave it, do not course over it, as if it were understood, but instead follow it down until you see it in the mystery of its own specificity and strength.”

“Admire the world from never ending on you—as you would admire an opponent, without taking your eyes from him, or walking away.”

“One of the few things I know about writing is this: spend it all, shoot it, play it, lose it, all, right away, every time. Do not hoard what seems good for a later place in the book, or for another book; give it, give it all, give it now. The impulse to save something good for a better place later is the signal to send it now. Something more will arise for later, something better. These things fill from behind, from beneath, like well water. Similarly, the impulse to keep to yourself what you have learned is not only shameful, it is destructive. Anything you do not give freely and abundantly becomes lost to you. You open your safe and find ashes.”

And so, I’ve shared what I’ve learned and treasured from The Writing Life in these Annie Dillard quotes. May they never be ash.

*It’s worth noting The Writing Life, from which all quotes are taken, was published two years after Dillard published her memoir, An American Childhood.

Find more on The Writing Life here and visit our Annie Dillard archives.