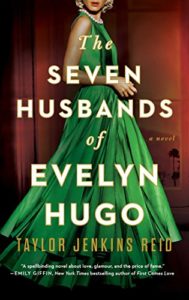 Taylor Jenkins Reid’s critically acclaimed The Seven Husbands of Evelyn Hugo, about an ultra-private Hollywood icon and the young reporter she picks to write her memoir, is being adapted for the small screen!

The Hollywood Reporter reports that author Taylor Jenkins Reid is writing the script for the show and executive producing alongside Ilene Chaiken and Jennifer Beals. Chaiken and Beals have also worked together on The L Word, including its upcoming reboot. This will mark a second producer credit for Reid, who’s also producing the Amazon adaptation of Daisy Jones & the Six.

The Seven Husbands of Evelyn Hugo is about Monique, a young journalist surprised to be selected by the iconic but enigmatic Golden Age actress Evelyn Hugo to pen her memoir. What follows is a dual narrative of Monique’s complicated personal life and her unraveling of Evelyn’s long and tumultuous Hollywood career, her many husbands, and a forbidden love she’s speaking publicly about for the first time.

The show’s currently in development, and if it goes to series will air on cable network Freeform.