I read a lot of kidlit, and completely agree with the concept that we’re in a new Golden Age of YA and children’s literature. The beginning of the 21st century has given us some wonderful stories in contemporary, fantasy, sci-fi, and dystopian settings, and we’re seeing a wider range of protagonists and points of view.

I’m still not seeing as many fat heroines as I’d like to, though – especially fat heroines who are happy with the way they look. There have definitely been some – Jelly by Jo Cotterill is a great, funny story that I recently read and loved, while Dumplin’ by Julie Murphy has been a worldwide sensation, and There’s Something About Sweetie by Sandhya Menon is high up on my TBR pile – but still not enough. As a fat adult who was a fat child, I really wish that there were more positive plus-sized heroines in kidlit and YA, to try and counter the thousands of toxic messages about our bodies that we deal with on a daily basis. 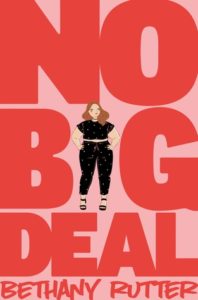 Because of this, I was really excited when I heard about Bethany Rutter’s debut YA novel, No Big Deal. No Big Deal follows Emily, a happy fat girl who loves her body despite all the social pressures telling her not to. I was already familiar with Rutter’s work as a blogger and fashion journalist (as well as being an awesome person to follow on Twitter, can confirm), so I jumped at the chance to interview her about No Big Deal.

Alice Nuttall: No Big Deal is your debut YA novel, but not your first book. How did the experience of writing No Big Deal differ from writing Plus+?

Bethany Rutter: It was so different from doing Plus+ because that was really an editorial job, and also relied on other people getting back to me about things and agreeing to send things through so it was more like an intense admin job mixed with a lot of human relationship stuff! Whereas No Big Deal was an entirely solitary endeavour, at least while I was writing it. The only thing that determined whether or not the book got finished was me. So it was a very different experience! 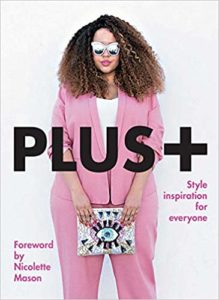 AN: Fat heroines in YA (or any other area of literature) are rare, and fat heroines who like their bodies are even rarer. Did you experience any pushback against Emily’s body positivity during the writing, editing, or publishing process?

BR: I experienced no pushback at all, and that was one of the reasons I was so, so happy to have my book edited by Rachel Petty at Macmillan Children’s – I needed an editor and a publisher who had no interest in toning down that key element of the story.

BR: The parts of the book that were difficult to write were the bits that most clearly chimed with my own experience. I’m quite good at suppressing negative feelings sometimes, so having to revisit painful things from my past that I’ve successfully avoided thinking about or dealing with was quite hard. I most enjoyed writing any bits that were about Emily being infatuated, I love obsessive romance stories!

AN: Do you think YA is moving towards a point where we’ll see more fat heroines who are happy with their bodies?

BR: I do think that it’s becoming more and more a normal part of the YA landscape, which in many ways is so much more progressive than adult literature. I’ve seen many more positive or neutral portrayals of fatness in YA than I ever have in adult.

AN: What would you most like teen readers to take away from No Big Deal?

BR: You will be the great love of your own life.

Interviewing Bethany Rutter about No Big Deal has made me even more excited for the book, and I can’t wait to dig into Emily’s story – and neither can my inner fat teen reader. Here’s to another great fat-positive heroine, and many more to come!

No Big Deal is out now. If you want to read some more stories with badass fat heroines, peruse 5 Fat-Positive YA Novels or 9 Romances Featuring Fat Heroines.

Sign up for What's Up In YA? to receive all things young adult literature.
Thank you for signing up! Keep an eye on your inbox.
By signing up you agree to our Terms of Service
#Interviews#Young Adult Literature