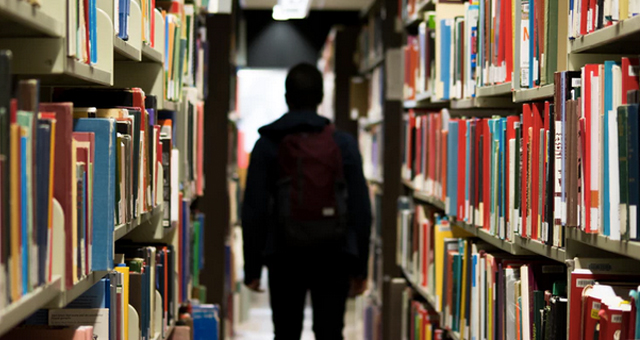 As each February rolls around, a few bibliophile friends (who are also dedicated Santa Monica Library patrons) and I anticipate the book selection announcement from the Santa Monica Reads Citywide Book Club. This year, we had to wait until May to find out that the 2019 selection was The Hate U Give by Angie Thomas. 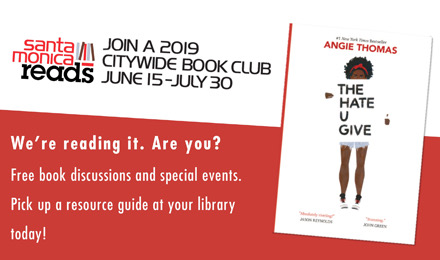 I realized how appropriate the reading The Hate U Give was. We read to understand, expand our very limited boundaries and our sense of the world and of ourselves. I always welcome the opportunity to be shaken from the safety of my small world and to open myself to realizing the uncomfortable truths about the larger world. Reading The Hate U Give would be a journey into understanding the trauma of a young African American high school girl witnessing her longtime friend, an African American teenage male, being shot and dying within minutes by a white policeman.

The Hate U Give is the brilliant debut novel of Angie Thomas, a native of Jackson, Mississippi, who still resides there. Thomas’s writing is skilled (Thomas has an MFA in writing and was also a teenage rapper) and has the reader engaged by the first page and wanting to read the book until you are done. Thomas’s gift to the reader is the voice of Starr, the narrator and protagonist of The Hate U Give.

Starr’s immediate honesty with herself about why she feels the necessity of adapting a different persona, depending on whom she is with at the time, has the reader in complete understanding and empathy of her.

The bookclub discussions for The Hate U Give gave this dilemma of Starr’s a great deal of time and thought and left some of us with this question: does anyone really connect all the pieces of oneself into an authentic whole person?

Category ID: 867
Category ID: 468
What’s Up in YA? Newsletter
Sign up for What's Up In YA? to receive all things young adult literature.
Thank you for signing up! Keep an eye on your inbox.
By signing up you agree to our Terms of Service

The first discussion I participated in for The Hate U Give included a screening of the 2018 film with a discussion afterwards. The event had many younger people (people under 20 years old) who were asking for solutions, not just the emotional reactions to the film and book. The solutions, besides the obvious solution of the urgent need to rid our culture of its systemic racism and violence, also recognized the reality that many people do not want to change. They revel in their celebration of hate. Could a political change have people reconsidering their comfortable hatreds; on that thought, both the younger and older readers shared the heartbreak of our country’s president who speaks his racism to power at every opportunity.

The Santa Monica Reads programming that accompanied The Hate U Give included film screenings of Fruitvale Station, Dear White People, and All Eyez on Me and a discussion on the impact of Tupac Shakur and of Shakur’s role in The Hate U Give. Jill Levoy, the Los Angeles Times Reporter whose excellent book, Ghettoside became an instant nonfiction classic, came to the Santa Monica Main Library and talked about the failure of the criminal justice system not only in Los Angeles, but throughout the country.

The Santa Monica librarians also recommended the California African American Museum, The Watts Towers, and the Museum of African Art as resources for further learning and research.

Here is the booklist compiled by the Santa Monica Public Library Santa Monica Reads Program to accompany The Hate U Give: 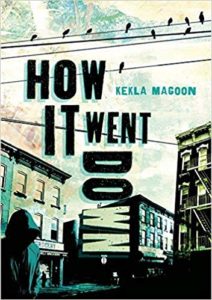 There are 17 witnesses to the shooting death of 16-year-old Tariq Johnson. Each witness brings 17 significantly different accounts of Johnson’s shooting that reflect not only the last minutes of Tariq Johnson’s life, but also states the societal costs of generational racism and poverty.

Why Are All The Black Kids Sitting Together in the Cafeteria?: And Other Conversations About Race by Beverly Daniel Tatum

This classic book, published 22 years ago, focuses on race in public education; the author, Beverly Daniel Tatum, is a renowned authority on racism and presents invaluable guides for facilitating discussion on race, the topic no one likes to discuss. 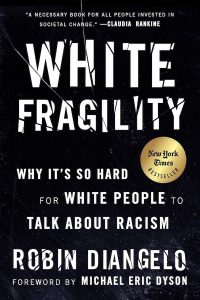 DiAngelo is an anti-racist educator and brings her insights into building constructive and engaging discussions between white people and people of color.

An acclaimed musician and actor who was murdered at the age of 25, Shakur lays bare his most honest and intimate thoughts, as well as his ultimate message of hope, in this book that was written when Shakur was 19 and discovered after his death. 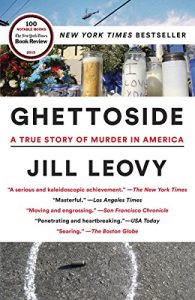 Ghettoside: A True Story of Murder in America by Jill Levoy

L.A. Times reporter Jill Levoy’s brilliant book has a simple thesis: the criminal justice system has failed the African American communities in Los Angeles, which has resulted in the country’s long-standing plague of African American homicides.