We’ve got an #ownvoices romcom YA debut for you to put on your radar. Check out The Perfect Escape by Suzanne Park, out April 2020, and read the exclusive excerpt below! 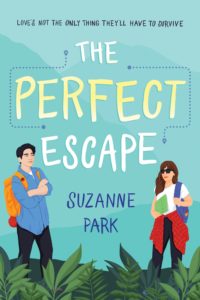 Love is a battlefield in this hysterical romcom debut, perfect for fans of Jenny Han.

Nate Jae-Woo Kim wants to be rich, just like everyone else at the elite private school where he’s a scholarship student. When one of the wealthiest kids at school offers Nate a ridiculous amount of money to commit grade fraud, he knows that taking the windfall would help support his prideful Korean family—and they need the money, especially after Nate’s dad loses his job. But is compromising his integrity worth it?

Kate Anderson wants a fresh start. Her high-powered CEO father is demanding she follow the plan he’s laid out for her: a college he’s picked, a degree in business, internships at his company. She fantasizes about escaping to New York, where she can pursue her dreams of being an actress. But how can Kate get there when she can’t even buy dinner without his approval?

Nate and Kate’s worlds collide at their job at a zombie-themed escape room. As sparks fly, fate steps in: a local tech company is hosting a weekend-long survivalist competition with a huge cash prize that could solve all their problems. And thanks to the survival skills they picked up watching hours of zombie movies, the two think they might just have a shot. But the real challenge will be making it through the weekend with their hearts intact…

“Welcome to the Zombie Laboratory. I’m Nate, and I’ll be your host for the evening. Can I get a show of hands of anyone who has been to an escape room before?” Near the main entrance, a goateed guy with chunky black glasses raised a hand. Ten tipsy 30-something-year-old bachelorette party ladies giggled next to him, ignoring me. They were all wearing strappy, sparkly heels, of course. Who the hell wore heels to a zombie escape room?

“Only one?” I asked. “Okay, show of hands—how many of you have recently been bitten or eaten by a zombie?”

A few titters came from some guys near the front. This time everyone made eye contact with me and smiled. Whew! I’d just added that joke in and was testing it out for the first time.

“That’s good! Because that would mean we’d be trapped in the room with more undead than our zoning permit allows.”

I’d have to try out another line next time.

The group chattered as we walked down the dimly lit, flickering hallway.

To my relief, the bachelorettes didn’t look drunk enough to require janitorial assistance (of the vomit-cleaning variety). No stumbling backwards in those ill-advised heels. No high-pitched, eardrum bursting squeals. No swaying.

“Can’t we just staaaaart? My heels are killing me!” The pouty bride-to-be swept her hair off her shoulder and crossed her arms. “I’m SUF. FER. ING!”

Her girlfriends gathered round and gave her hugs.

“Not too much longer,” I said with a smile.

Sometimes, if the group’s vibe is good, I help give clues for some of the puzzles. But this group? Nah, they weren’t worth the time. With all the side-eying and sighing, I knew they weren’t into it.

The other large party in this group was a bunch of douchebros from Houzzcalls, a telemarketing software start-up down the street. They wore company shirts with “We make Houzzcalls” across their chests. Judging by the hooting, hollering, and advanced handshake coordination, I’m guessing these guys were in sales, not software development. They probably found a Groupon, or were here for mandatory team bonding, not because they actually liked puzzles or were zombie aficionados. Unlike us dedicated employees, who lived and breathed this stuff.

Judging by the looks of these guys, this sorry bunch would panic after thirty minutes when the halftime buzzer honked, a cue for the zombies to lean harder on the barricaded door. The undead got feistier in the second half, chomping and snapping their teeth as they pushed their way through. The music would speed up, and the clock would tick louder. It was all part of the game. A game I loved.

On the hour mark, I pushed open the heavy metal door and dropped my voice an octave. “Good luck.”

Once we entered, the gigantic glowing red digital clock on the wall started the one-hour countdown. The first clue was laid out on the metal laboratory table, a sixty-piece jigsaw puzzle spelling out the next set of instructions. It went ignored by everyone except the trio of Russian exchange students who had signed up at the very last possible minute.

The Russians searched along the walls for a case, not realizing it was in my hand. I could offer help, but they needed to ask me for it. Those were the rules. The attaché case held a hidden key that would chain-lock the door, keeping out the soon-to-stampede army of zombies.

My prediction? This group wouldn’t even finish the second clue. They’d be devoured by zombies at the thirty-two, maybe thirty-three minute mark.

Just shy of half an hour, a warning alarm went off, and the door with the broken padlock and chain pushed open a little. Grotesque, gray, mutilated arms flailed through the widened opening, and the groaning and moaning commenced.

The bachelorette party switched gears from mad flirting to scream-shrieking, “Oh my God!” on repeat. They retreated back into the far corner away from the door, stumbling over the wussy tech sales guys as both parties ran as far away from the zombies as possible.

I shook the briefcase in my hand, hoping someone would hear the padlock and key clattering inside. Like a giant, adult rattle. Come and get it! Achtung! Did Russian people know German?

The room was divided by the zombie arm blockade: bachelorettes and sales guys on one side, and the exchange students and me on the other. I rattled the briefcase one more time.

“Is that the attachment case?” one of exchange students asked, pointing to my hand.

I nodded, and all three exchange students bolted toward me. The girl reached me first and flipped up the clasps. The thirty-minute alarm went off, and the zombies barreled into the room.

There were eight zombies in all, and they split into two groups and moaned and groaned as they made their way to their human victims. At thirty-one minutes, the female exchange student was the last one standing, and she jumped on the table with the attaché case high above her head, wild-eyed and ready to use the case as a weapon. One of the crawling zombies behind her tapped her foot. Gotcha. Game over.

The clock froze at 31 minutes. The zombies exited the way they came in, and all of the overhead fluorescents flooded the room with intense light. It was the worst escape room effort I’d ever seen.

With eyes filled with disappointment, each of the Russians shook my hand and said they had a good time. “How many clues were there?” the girl asked.

I didn’t feel like sugarcoating. “Ten. You guys had a tough group to work with. But thanks so much for coming.” I had a pocket full of “Please review us on Yelp!” cards, but I only gave those to winners, people who would rave about this place. Winning groups usually came up with a system, like division of clues, or all solving problems together. Losers broke into factions immediately like, say, exchange students vs. humping party animals. Unfortunately for me, losers gave weak tips.

“Let’s go get some booze to celebrate our loss!” cheered one of the bros, as he walked out with one of the bachelorette partiers, his hand sliding down the small of her back. The rest of the group shuffled out too, giggling and guffawing as they exited.

The bride patted my face and said, “You’re adorable! My fiancée is Korean, too,” and stumbled out. I was surprised she could tell I was Korean. Usually people assumed I was Chinese. Sometimes Japanese. Even kids at school who’d known me forever thought I was Chinese.

“Can I come out now?” a muffled voice cried out from the closet on the far wall.

The door creaked open. I backed away as a mutilated female zombie wearing a crumpled witch hat stumbled out.

Sign up for Kissing Books to receive news, book recommendations, and more for residents of Romancelandia.
Thank you for signing up! Keep an eye on your inbox.
By signing up you agree to our Terms of Service
#Romance/Erotica#Young Adult Literature#excerpt#excerpts