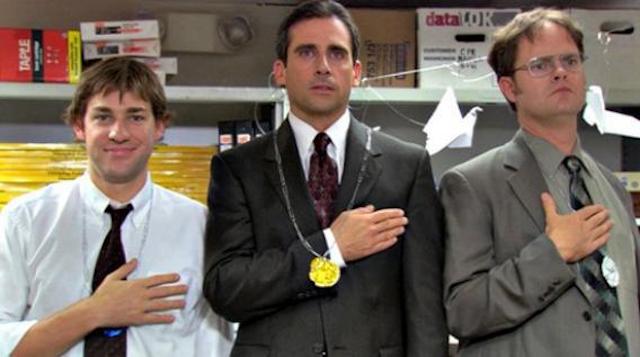 Have you watched The Office in its entirety at least seven times? Are you are heartbroken over the news that it will leave Netflix in 2021? Do you wish that something, anything, could compete with the joy you feel when you hear the opening credits? I am here to gently suggest turning to another medium, because pretty much nothing can compete (except maybe 30 Rock). I recommend picking up a book, a la The Finer Things Club. And to get you started, here is a (non-)comprehensive guide to the book you should read, based on your favorite episode of The Office.

Diversity Day in the office is supposed to be about learning tolerance and acceptance. Instead, Michael Scott bogarts the conversation in an attempt to impart his own knowledge and perspective on diversity. As all good Office fans know, he upsets pretty much everyone in the room. In T. Geronimo Johnson’s satirical Welcome to Braggsville, a group of mostly white college kids also attempt to reframe racism, with the goal to educate their audience. Their stunt ends with tragic consequences.

“The Dundies”: Homesick for Another World by Ottessa Moshfegh

If your favorite episode of The Office is “The Dundies,” which focuses on fitting the full cast of characters under Michael Scott’s silly Dundies umbrella, a short story collection would be a good fit for you. Ottessa Moshfegh’s collection investigates the stories of misfits, outcasts, fringe members of society, just as Michael attempts to categorize his own motley crew of employees.

This episode of The Office and Lightning Rods by Helen DeWitt are both about how to deal with sexual harassment in the workplace. Though the respective solutions may be quite different, fans of this episode will find a lot to love about DeWitt’s crudely hilarious and strange novel.

The office encounters an unwelcome dose of transparency when Michael Scott is given the freedom to read his employee’s emails in this episode. As the office and Michael find out, transparency comes with its own set of challenges. Fans of this big brother-esque episode will enjoy Dave Eggers’s dystopian novel The Circle, about transparency taken to the extreme.

“Booze Cruise” is one of the first episodes that focuses strongly on Jim’s feelings for Pam. Unfortunately for his feelings, he is dating Katy and Pam is engaged to Roy. In this episode, all four are shoved together on an office booze cruise, forcing them to confront their awkward dynamic. Fans of this four-person interpersonal minefield will enjoy Aja Gabel’s The Ensemble, which chronicles the ever-changing dynamics among members of a string quartet.

“Dwight’s Speech” is one of the first episodes of The Office to really give Rainn Wilson’s character the spotlight. We are introduced to his quirks, his perfectionism at work, and we hear him deliver a, um, powerful monologue. Gabe Habash’s first-person novel features an equally unforgettable character, Stephen Florida, who is similar to Dwight in his singular obsessiveness with his work. Fans of Dwight will be entertained and intrigued by Stephen Florida, college wrestling champion.

“The Dinner Party”: A Confederacy of Dunces by John Kennedy Toole

This pairing almost doesn’t need to be explained. One of the most famously beloved episodes of The Office must be paired with the cult favorite, A Confederacy of Dunces. You’ll laugh, you’ll cringe, and you’ll cringe some more. Two cast-of-characters plots, each buoyed by a hilarious leader.

It’s impossible not to love the two-part “Niagara” episodes. There is love, there is a wedding, there are endlessly interfering friends and family. The only book that can deliver this same trifecta of emotion, hilarity, and utter frustration is Kevin Kwan’s Crazy Rich Asians. The book is predicated on a wedding, and meddling friends and family threaten to spoil everyone’s good time.

“Dwight K. Schrute, (Acting) Manager”: Then We Came to the End by Joshua Ferris

I recommend Then We Came to the End for all fans of The Office, but especially fans of this episode. Then We Came to the End is also set entirely in an office environment and deals with the many associated trials and tribulations. But this episode, especially, aligns with the book in observing what happens when chaos takes over and maybe a gun goes off.

We can’t take away the pain of knowing there are no new episodes of The Office to cycle through, but we can do our best to distract you with something there is always more of: books.