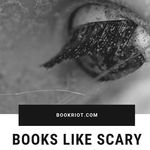 I’m writing this post before I’ve seen Guillermo del Toro’s adaptation of Scary Stories to Tell in the Dark by Alvin Schwartz (illustrations by Stephen Gammell, let’s not forget, because what the fuck? Those drawings haunted my nightmares for literal years. Are continuing to haunt my nightmares, if I’m being honest, which I almost always am, if not a little too honest). But I feel like that’s okay, because while I trust del Toro—I really, truly do, and want to be his friend so fucking bad, even if just to tour his house and marvel like a smitten, bookworm/horror fiend version of Belle from Beauty and the Beast—I just need everyone to take a minute to relive their nostalgia of the original trifecta.

You know the ones: the black-bordered paperbacks with the illustration on the front that made your dad recoil when you brought it to him at the bookstore and begged through your coke-bottle lenses to have it. The ones that had your friends come over and be like, let’s read a story, and you’d be like, OKAY BITCH, HERE WE MOTHERFUCKIN’ GO. (To be honest, my friend Emily Martin and I had a slumber party last year and did this very thing. She stopped us halfway and said, We should be recording this. You got to listen to it. It’s funny af.)

My point is, there were few things more delightful to me as a child than scaring the bejeezus out of my friends and myself, and Scary Stories was my preferred way to do that. It had the rare combination of folklore, urban legend, abject horror, innocuousness, and humor that I now choose to believe are my main character traits.

There are not very many things that strike that exact cocktail—maybe none. But here are my closest calls, and the reasons why I think they come the closest.

So, as I was reading the first story of this collection two years ago, I remember thinking, “OH, HOLY SHIT, THIS IS JENNY. THIS IS THE GIRL WITH THE GREEN RIBBON.” This story is, arguably, what reinvigorated my love for the Scary Stories because, although the green ribbon is a folktale, I read it first in one of Alvin Schwartz’s collections. By the way, did you ever notice when you were a kid that all of those stories were SOURCED? Go look at your copies. Look at the PAGES AND PAGES of bibliographic material!

That was the most horrifying realization to me revisiting the stories as an adult—they were real.

Granted, Her Body is fiction, and obviously so, but it still retells the folktales. This book, though, is very Adult. And I mean that BOTH WAYS. Buy it immediately. It’s exactly meant for people who grew up with these books. (OH, and Machado has a memoir out this fall—definitely, definitely preorder it!)

You had me at Tales of Everyday Horror. Am I right? Although this collection of short stories definitely retells fairytales rather than folktales, that edge of terror is really razor-sharp, and for that reason, I think that this, too, is meant for the children who liked the horror of the fairytale. Rather than wanting to be the princess, you were disappointed that the beast turned back into that pretty boy at the end. Am I right?

If so, this one is for you. I don’t want to spoil it, but Ortberg’s first story retells the little mermaid, the way it SHOULD have gone down. You won’t be disappointed. I really can’t oversell this one. Get in there.

My Mother She Killed Me, My Father He Ate Me edited by Kate Berhheimer

This anthology is one that I’m SO happy that I picked up—it’s also fairytale retellings, but the same as above, they mostly emphasize the horror. The one that has always stood out to me the most—the one that I never tire of rereading—is Timothy Schaffert’s “The Mermaid in the Tree.” It retells the Hans Christian Andersen version from the perspective of the prince’s new girlfriend.

But it’s different. It’s set in this grimy coastal town during a Mermaid Parade, and the prince rescues the mermaid, not the other way around. The whole book is full of grit and steampunk, and it’s truly not to be missed.

The Tales of Uncle Remus by Julius Lester

This story collection is full of folktales that are true retellings, and I grew up on these as well. Now that I look back on it, I was a pretty scaredy kid, always running down the length of the house to be like DADDY CAN I SLEEP WITH YOU I HAD SOME BAD DREAMS. Some bad dreams. Not a bad dream.

I still have an overactive imagination, to the point that when I look back at this book, there are details so firmly ingrained in my mind’s eye that I’m shocked when they’re not on the page.

The story I made my dad read aloud to me the most often—by the way, we’re country as hell, so he did ALL the voices—was the story of Brer Rabbit having The Mopes. He goes to visit a witch doctor, Aunt Mammy Bammy Big-Money, for the cure. I asked my dad the other day if he remembered that to get to her hole in the ground where she lived, you had to hop some, flop some, run some, skip some, jump some, hump some, and if you weren’t careful, you still wouldn’t get there? He said, grinning, “That’s right! You always wanted me to read that story.”

I always wanted him to read that one because 1. it was the longest in the book and I didn’t want to go to sleep, and 2. it was the scariest. IT HAD A WITCH DOCTOR IN IT, Y’ALL.

Speaking of childhood reveries and witches, at the last wedding I went to, I remember yelling drunkenly across the table to my best friend, “Yo, Roald Dahl fucking HATED kids, am I right?” because this is where my mind goes when left to its own volition. Not to the wedding or dancing at hand, but to Roald Dahl. She agreed. He had ALL of them orphaned. A rhinoceros escaped from the zoo and trampled them. One of them had to befriend a giant. One had to live in a peach with all those big-ass, nasty-ass bugs. They got thrown around by their hair and force-fed chocolate cake and thrown into the chokey.

And one of them had to live as a mouse in a hotel that was hosting a witch convention. FML. I watched this IN. SCHOOL. In school! With my coolest teacher, 4th grade, we read The Witches. And by “we,” I mean, I was PAGES ahead of the class, and when it came my turn to read aloud in the rotation, Mrs. Franko would immediately tell me, “Mary Kay, we’re on page 22, first full paragraph,” or whatever, because she ALREADY KNEW I was all up in that shit. I did the same thing with Wait Till Helen Comes. She didn’t even bother being like, stay with the group, don’t read ahead, because she knew the suspense would eat me alive.

The Tailypo: A Ghost Story by Joanna C. Galdone

This book is the first one that I can remember literally scaring the shit out of me. I’ve said on our podcast a bunch of times that when I get actually scared, for real scared, my bowels move. I have to find a place immediately because IT IS COMING. I must have been in 1st grade when our librarian sat us down in the musty-ass one-room library on that booger-filled storytime rug and read this folktale to us, book open, showing the pictures as she cooed about the animal wanting its tail back.

The story goes that there was a lonely old man who lived in his cabin (in Appalachia, I imagine now) who was down to his last can of beans. He had them over the fire heating up when an animal busted in through a hole in the ground and he chopped off its tail and he threw it into the pot.

That whole night, the animal scratches at the cabin to get its tail back. Y’all, I’m retelling this shit from memory. I have not seen that book since the first grade. That’s how much it imprinted on me. You got to buy it for your kids. Shit, buy it for YOURSELF. You deserve it.

We all deserve to be as scared now as we were by folktales as kids. I’m forever chasing that feeling. One cool piece that details the history of folk horror can be read here, and it’s FASCINATING. But, if you know of some good reads that aren’t on this list, please, let me know immediately, and get on these ones right here, too!