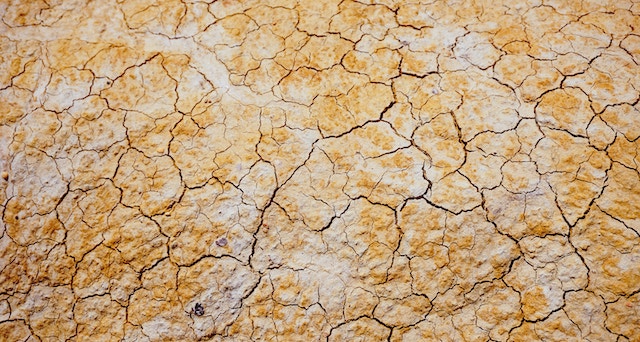 In honor of the dog days of summer, I’ve put together a list of books with heat. These are books where the hot setting—be it the Riviera, the desert, or swampy Florida—comes alive and drips *ahem* like sweat off the page. If you want to lean in to the hottest days of summer, this is your list!

This novel takes place in dry, hot Spain. It’s the story of Sofia, an anthropologist who begrudgingly cares for her mother Rose. They go to Spain to see a doctor who might be able to cure Rose of a bunch of medical ailments, but it all gets a bit mysterious from there. The ocean is the only solace from the heat in this strange desert town, but it’s full of jellyfish. Like the ocean full of jellyfish, this short novel reads eerily like something bad is always about to happen.

Have you been to Iowa in the summer? I’ve lived here for a decade and let me tell you, the Midwestern heat is oppressive. A Thousand Acres is the story of an Iowa farmer who decides to retire and split his thousand acres of farmland between his three children. This sparks a huge family drama, and all sorts of domestic issues bubble to the surface. There are lots of long, hot summer days in the cornfields, followed by long, hot nights with little to do except play board games and drink. 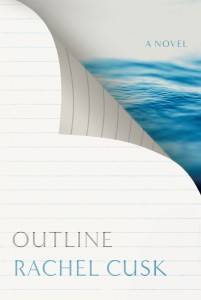 Outline is the first novel in a trilogy about a woman who moves to Athens for the summer to teach a writing class. It’s one of those delightfully literary novels expressed fully through the stories and daily lives of everyday people, and it has themes of family, loss, writing, and creativity throughout. Plus, suffocating heat is everywhere in this one, and the setting just about jumps off the page.

Kristen Arnett’s novel is a gem of gothic Floridian literature. It centers a family’s taxidermy shop, after the father dies by suicide right in the workshop and his daughter Jessa finds him. Jessa now has to deal with the struggling family business on her own, help her mother who is spiraling in grief, and deal with the fact that she’s still in love with her brother’s wife. Florida is totally alive in this one—it’s full of cicadas, flora, and humidity. Perfect for a sweltering summer day.

The Golden State By Lydia Kiesling

Daphne’s life back in San Francisco is falling apart—she’s had a major crisis at a job she doesn’t really like, her Turkish husband is unable to return to the United States after a passport issue, and she’s crumbling under the burden of caring for her baby, Honey, on her own. So she drops everything and takes off with Honey. They head for the Altavista desert, where Daphne spends a lot of long, hot days alone with her anxious thoughts. That is, until she meets the town characters. It’s a beautiful novel about communities divided, and I enjoyed reading about this desert town.

A Prayer for Travelers takes place on the California-Nevada border in a sleepy desert town. Cale was raised there by her grandfather, whose health is now rapidly in decline. Cale is just out of high school and has to figure out what comes next for her. She becomes a waitress at the small town diner where she bumps into an old classmate, Penny, who shows her that a big and complex world exists outside their isolated desert. 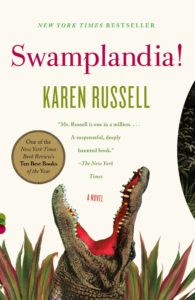 This novel is set in the Florida Everglades at a gator-wrestling theme park—need I say more about the hot, summer vibes? Ava is 12 years old and she knows the family-owned theme park, Swamplandia, is in decline. Her mother, who was the star performer of Swamplandia, has just died, her dad is lost in grief, and her sister is communing with ghosts. Ava and her brother have to try to figure out how to save the family and Swamplandia both. This is another gothic, mysterious read, full of humidity and heat.

This novel takes place in rural Mississippi. Jojo is 13 years old and his father, Michael, has just been released from prison. Jojo and his baby sister are mixed race; their father is white and their mother, Leonie, is black. Leonie wants to be a good mom, but she’s poor, addicted to drugs, and angry at the world around her. So the family all lives with Leonie’s parents, who do most of the work raising the two kids. When Michael is released from prison, Leonie decides to take the kids on a road trip through Mississippi to pick him up. Their journey is a hot, sticky road trip through the South, and the family is haunted by ghosts of their past.

The Atlas of Reds and Blues makes me think of heat in a very literary way—it’s bright, blinding, fast, and violent. It’s the story of a character named Mother who is American-born to Bengali immigrant parents. Mother moves her own family from the heart of Atlanta to the gentrified suburbs, as a way to give her children a better life. But all this hope is violently snatched away from her. The novel takes place in one day’s time (and I read it in just about that same length of time) after Mother has been shot by the police following a raid on the family home. It’s a too-true story of the horrific institutional racism immigrants face, and it will make you hot with anger.

Signs Preceding the End of the World by Yuri Hererra

Signs Preceding the End of the World is written in Spanish and translated to English by Lisa Dillman. It takes place on the border between the United States and Mexico, and it follows a young woman named Makina who flees for the United States to follow her brother who left a little earlier. There’s a lot of imagery about the big, lonely desert, and Makina’s harrowing journey to cross the border. At only 114 pages, this novella will suck you right in. 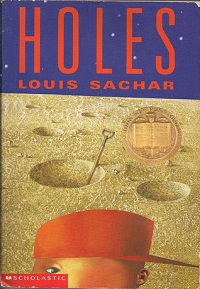 Holes is a classic desert novel! Stanley Yelnats is sent to a detention camp for young boys out in the desert (because his family is cursed and Stanley is wrongly convicted of stealing a pair of sneakers). There, all the boys have to dig holes all day long in the blistering heat, which, according to the Camp Warden, is supposed to “build character.” But it turns out there’s so much more mystery to uncover in the desert in this novel.

Where the Crawdads Sing takes place in the late 1960s near a sticky swamp in North Carolina. When the handsome and well-liked Chase Andrews is found dead, the town immediately suspects Kya, an ostracized outcast who they call “Marsh Girl” because she lives on her own in the swaps. It’s a story of prejudice and perseverance, and the hot wild swamp is as alive as any character in this one.

Lost Children Archive takes place during a family’s summer road trip from New York to Arizona. The parents are both historians who do documentary research. The father is a sound documentarian researching the Apaches. And the mother is researching contemporary immigration, specifically the children being detained at the southern border of the United States. As the family journeys west to the desert, we learn about the tragedy of these two groups of “lost” people—people who get tragically erased from the narrative of white America. But as the family travels into hotter and more remote regions of the desert, the reader can detect a family fissure also brewing and threatening to bubble over.

Call Me By Your Name by André Aciman

Call Me By Your Name is set on an Italian Riviera estate where 17-year-old Elio’s family lives each summer so his father can do archaeological research. Usually Elio spends the hot, restless summers reading and taking short dips in the water to cool off. But in the summer of 1987,  the family is joined by a graduate student named Oliver who is several years older than Elio, and it changes his whole world. Elio grapples with the erotic feelings he has toward Oliver, which at first are not reciprocated, but eventually both Elio and Oliver give way to a romantic relationship they keep secret for the whole summer. The story is sensual, heartbreaking, and so vivid.

In this classic, Fitzgerald talks a lot about the relentless, beating heat. Many of the most tense moments of The Great Gatsby happen on the hottest summer days. You know the story—the mysterious millionaire Jay Gatsby pines for Daisy Buchanan, who is married to Tom, a complete rogue. The narrator, Nick, observes this all as the Jazz Age rages and lives fall apart.

Looking for more warm weather reading to send out your summer in style? Here are some beach reads and 50 of the Best Books to Read This Summer. Enjoy!