I didn’t read much YA before the all-ages Lumberjanes got me into comics. When a friend recommended Saga, I was hesitant. I wasn’t all that into sci-fi either, and I couldn’t foresee that it would eventually become one of my favorite series.

Similarly, when a friend passed along an ARC of The Adventure Zone: Here There Be Gerblins, fantasy wasn’t my thing. Nor was D&D. I’d tried the game for the first time earlier that year and, as a socially anxious introvert, found it exhausting. So color me surprised that I LOL’d on every single page of the graphic novel, purchased my own copy so I could read/LOL again, and then fangirled all over the damn internet, trying to convince everyone within my orbit to get their own copy. Who was I even?

By now, you likely already know that TAZ is based off a podcast of the same name, a long-running series that actually followed a live D&D campaign. By now, the second TAZ graphic novel—The Adventure Zone: Murder on the Rockport Limited—has dropped. By now, you’ve read both volumes (or, if you haven’t, what the hell). But why does it work so well? What is it about comic series and graphic novels that open us up to exploring new literary worlds we might not have otherwise given a chance? 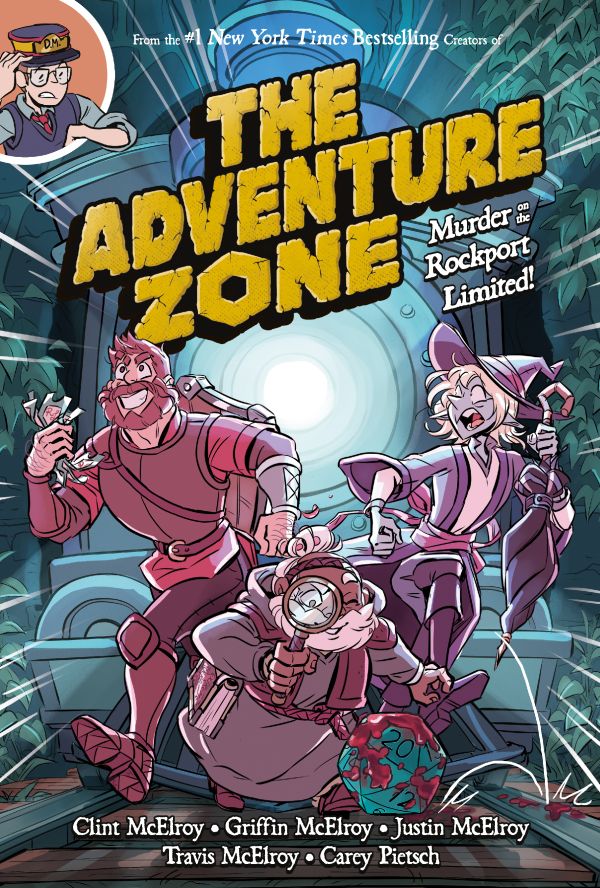 Because I live a charmed life, apparently, I was given the opportunity to chat with brothers Griffin and Justin McElroy and illustrator Carey Pietsch, part of the team behind the TAZ books. Knowing they had worked in podcasting, video, online journalism, and now the comic form, I was curious to know more about why the McElroys had thought to go in that direction.

In speaking with them, I learned that the McElroys are quite attached to podcasting as a medium for storytelling (duh) and that they’re not necessarily huge comics readers (gasp!).

“There’s a reason we started doing this stuff in this medium,” said Justin of podcasting, “and the reason we continue to is that it’s a very direct way to hear people talking to each other and to hear the humor that comes from straight-up human conversations.”

So why the comics?

Justin conceded that people might feel overwhelmed if they were to come to the podcast now, which ran for 69 episodes over the course of three years.

“I felt very proud of the story we ended up telling,” said Justin, “but I felt a weird sense of guilt asking people to just invest 70 hours to consume this story we made. I like the idea of a story that doesn’t require 70 hours of unadulterated audio processing to consume.”

And this makes sense. While I hate to have to remind people of this, comics absolutely count as literature. But at the same time, seeing new ideas and new worlds in this visual form can make comics more accessible to the average reader, at any age. And the interplay of images and text can be especially engaging.

The McElroys admit, however, that adapting the podcast into a graphic novel was difficult…at least the first time around.

“We’re lucky enough to have worked in a lot of different mediums to varying degrees of intensity,” said Griffin. “But doing the graphic novel has been, I think, the most deep-dive discipline we’ve tried to learn.”

“When you’re making a podcast,” said Justin, “you can say whatever dumb bullshit you want.”

But taking the sprawling story they’d created and squeezing it into a finite number of panels was a different animal entirely.

“We knew that a bunch of in-jokes and D&D jargon was going to turn people off,” said Griffin. “The answer to that came mostly in the form of expanding some things we never got the chance to flesh out in the podcast. Touching up story beats.”

And by the time they got to their second graphic novel, they had it down. It didn’t hurt that Murder on the Rockport Limited was a murder mystery with a more limited scope. As such, it was much easier to intuit what was essential to the story.

And then there was the artwork. Since I began reading comics several years ago, I’ve become enamored of how the art and the coloring throughout a book can enhance a story. In the case of TAZ, I was coming back to an artist I’d already enjoyed in the past, most notably via the Lumberjanes series. Pietsch’s work is delightful and vibrant and fun, and also tends to revolve around the world of magic. I was curious as to how Pietsch had approached TAZ’s irreverent take on the popular fantasy role-playing game.

“I’m really into fantasy settings as a way to explore how characters might react in situations we might not encounter in our day-to-day lives,” said Pietsch. “The Adventure Zone was the perfect fit for the stuff I like to draw. I could figure out stuff like, ‘How do I convey when someone does a sleep spell?’ These were fun challenges to puzzle out.”

Of course, once I finished reading the first Adventure Zone comic—and, later, the second one—I found myself suffering from a massive book hangover. What else could I read that would make me LOL on every page? Which comics contained both the humanity and hilarity I’d found within the work of the McElroys and Pietsch? Which books would push me seamlessly toward new worlds in the way that only comics seemed to do?

While Justin was quick to admit that he didn’t read many comics (though he did give a much-deserved shout-out to Saga), Carey was ready with an entire list of comic recommendations. Here are just a few:

This comic, which actually started out as a webcomic, is a “coming-of-age story about hockey, bros, and trying to find yourself during the best four years of your life.” 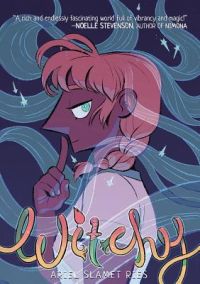 Another webcomic-turned-physical-book, Witchy is about a young witch who must choose between cultural expectations and her own ideals.

You may have noticed by now that Pietsch is a fan of webcomics. She says she finds them accessible, and that it can often be easier for readers to find content written by people who are much like them. In this case, “Vainglorious” still lives solely as a webcomic. It’s about a small dragon who challenges his queen for the throne, only to be exiled in the form of a human.

“I just read an ARC of Stargazing that broke my little heart into many, many pieces,” said Pietsch. This forthcoming middle-grade graphic novel (due out on September 10) is about two unlikely best friends.

You’ve likely already heard of this much-buzzed-about title. It’s about a protagonist who must learn to let go of a particularly toxic relationship in order to lead a healthier life. 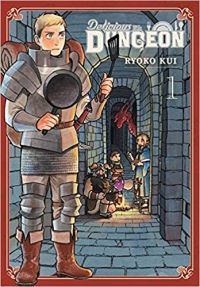 One of Pietsch’s “favorite fantasy comics of all time,” Kui’s ongoing webcomic-turned-book is about a group of adventurers trapped in a dungeon with no provisions—so they decide to eat their way out.

Nowak (who has also worked on Lumberjanes, which is clearly a mark of awesomeness) has taken a collection of her mini-comics and anthology contributions and put them together into one glorious volume.

I don’t know about you, but I’m excited to explore every single one of these. Fantasy? Witchcraft? Hockey? Not my usual bag, but sure. Comics have a way of winning me over to just about anything.

If you haven’t read the two Adventure Zone books yet?

“I honestly don’t think you need to know a whole lot,” said Justin. “It’s an irreverent, twisted take on Dungeons & Dragons. But really it’s a story from people who’ve never told a story all together before that is heartfelt.”

Which worlds have you unexpectedly enjoyed thanks to comics?