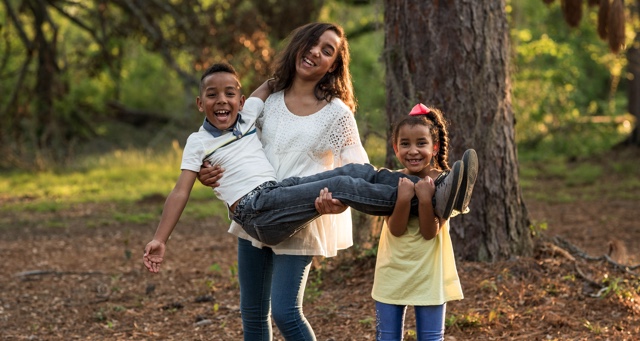 Underrepresentation of Minorities in Children’s Media

In 2016, roughly 12% of children’s books from U.S. publishers were written by racial minorities. But in the same year, minorities (including white Hispanics) made up 39% of all Americans. Even in the limited cases where kids’ books feature non-white characters, these are rarely written by authors of the same racial background. So books aimed at American children fail to fully reflect who those children are. And even when they become more representative, this is generally because white authors are telling others’ stories. As the chart below shows, using data from the Cooperative Children’s Book Center at the University of Wisconsin-Madison, the gap is especially pronounced for children’s books about Black characters. 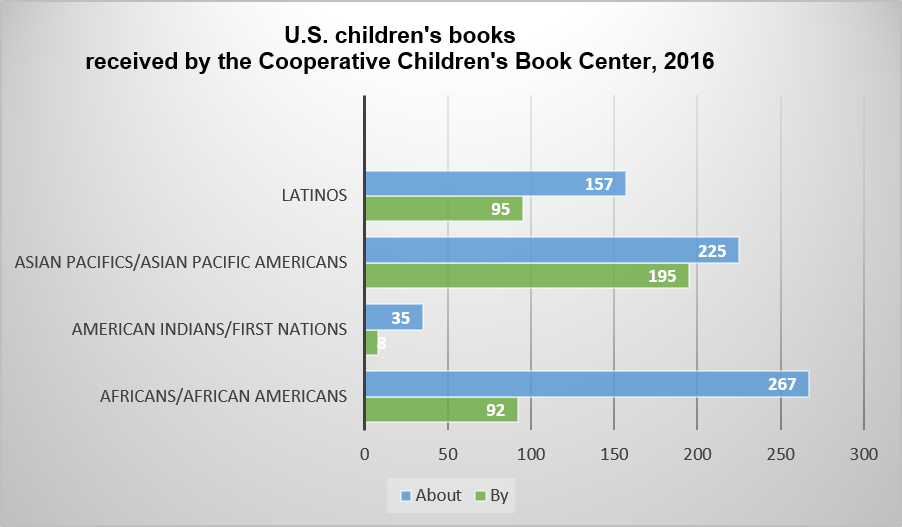 This matters because, as librarian Starr LaTronica has said, “If you only stick to what you know, you’re creating this poverty of experience for kids and funneling them into that…You don’t feel invited to the party if you don’t see yourself reflected in the literature.”

Several organizations are tackling the gap. For instance, the nonprofit We Need Diverse Books tackles the problem of underrepresentation in children’s stories. It gives awards and grants to authors and illustrators considered diverse in terms of ethnicity, gender, sexuality, and ability. It also seeks to spotlight their work among students, booksellers, publishers, and others.

Children’s book publishing might seem niche, but it mirrors patterns in children’s entertainment more generally. Media scholars have shown that children’s TV makes white boys—who are overrepresented in these shows—feel good about themselves, while it lowers the self-esteem of girls and non-white boys.*

And since the 1940s, cartoons have systematically omitted characters of color. One 2009 study of short American cartoons produced between the 1930s and the 1990s found that Black and Latinx characters appeared onscreen only a third as much as they should have been, if they’d accurately reflected real-life demographics. And this racial underrepresentation actually worsened over time, especially from the mid-1960s.

Children’s media is critical for forming early attitudes and behaviors. This is especially true for educational content. It was a mom in Texas, Roni Dean-Burren, who got a major textbook publisher to change an ignorant bit of text in 2015. This was a McGraw-Hill geography textbook for high school students, which called Africans forcibly brought to America, starting in the 1500s, “workers” rather than “slaves.” Dean-Burren explained why this mattered:

“It’s that nuance of language. This is what erasure looks like.”

The Facebook post, tweet, and video that Dean-Burren posted reached millions of people, and led the publisher to change course. Clearly it’s not just those with an established platform who can question narratives and share counter-narratives, to keep purveyors of misinformation from getting away with it.

The furor over the McGraw-Hill geography textbook that called slaves “workers” shows that the army of educational consultants that looked over the textbook was insufficient. Being in a position of influence clearly doesn’t insulate someone from bias, which they might then help to perpetuate.

Children internalize messages not just from the media they consume, but of course from the way they’re treated in the real world. And psychology research shows that childcare providers expect Black and Latino kids to act out just based on their names and races, before they’ve even entered a classroom, even if the same behavior is described for white kids.

A seemingly innocent example appears in Barbara Trepagnier’s book Silent Racism: How Well-Meaning White People Perpetuate the Racial Divide. One adult mentions, unrelated to anything, “a bright black student.” The choice of words highlights the supposed surprise of a Black student being bright, tapping into stereotypes about racial differences in intelligence and achievement.

This kind of language matters because the expectations of educators absolutely affect student performance. Framing and labelling theories from social psychology explain that the way certain groups are commonly depicted affects how the general public views them…and how they view themselves.

But we know this from common sense experience as well. For a kid who’s told again and again that kids who look like him are thugs, it’s easy to believe that and to start behaving in criminal ways. For a kid who’s lumped in with other “bright” students, there’s a good incentive to live up to such positive expectations.

The expectations start even before kids and educators meet. Students with conspicuously Black-sounding names are less likely to be recommended for school gifted programs, and students with Asian-sounding names are more likely, compared to students with names that aren’t racially coded. This is true even for children within the same family. (Increasing the numbers of Black teachers is one way to lessen these effects.)

Some things weaken these stereotypes that educators bring to the classroom: being of the same race as a particular child, or having information about that kid’s home life. So having a broadly generalized story about a race creates a self-fulfilling prophecy about it: treat a kid with suspicion, and you’re likely to find something that justifies your suspicion. As with so many things, greater open-mindedness (as well as diversification of authority figures) is a salve.

One problem with avoiding talk about race is that language and stories are how humans make sense of the world. Imani Perry, Professor of African American Studies at Princeton University, writes in More Beautiful and More Terrible: The Embrace and Transcendence of Racial Inequality in the United States, “The stories that are told about members of racial groups in daily conversations, in print, through the broadcast and new media, in literature, and in child rearing, are a fundamental piece of how we acquire knowledge about those groups. They also are part of how we make decisions about how to treat individual members of those groups…certainly narrative shapes the truth that people experience.”

These narratives are politically and economically useful for dominant groups. Perry gives an example that’s worth reproducing at length:

“If individuals and groups dedicate themselves to maintaining deep skepticism about all racial narratives that are attached to denying access, resources, or services. Imagine a teacher is hired to work in a school in a poor community of color. Imagine that this teacher sets up a parent-teacher association. She schedules a series of PTA meetings, and almost no parents show up. Her fellow teachers and the mainstream news media and film industry may tell her, “The parents don’t show up because they do not care about their children’s success,” and she may decide that her efforts to involve parents in their children’s education are all for naught. Or, she may embrace a skepticism about this racial narrative. A skepticism about this narrative would demand certain kinds of investigations. She might ask parents what keeps them from coming to the meetings. She might try to determine their work schedules and access to child care and schedule meetings that accommodate parents’ schedules…All of these possibilities open up if the teacher remains skeptical of the racial narrative that encourages disengagement or judgment rather than increased engagement and concerted problem solving.”

Clearly, remaining skeptical about racial narratives in children’s media and relationships, without using this as an excuse for shouting “fake news” whenever we hear something we don’t like, is important.

For further reading about diversity in children’s books, check out:

“30 Children’s Books about Diversity That Celebrate Our Differences”

“Diversity in Children’s Books: How to Do It Well”

Editor’s Note: These studies do not take into account nonbinary genders.