Tabitha Bird is an author from Queensland, Australia. Her debut novel, A Lifetime of Impossible Days, is about the same character at three different ages. 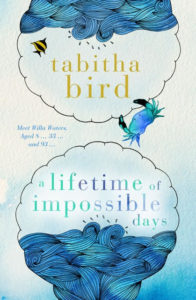 “A thoughtful, uplifting and magical story of childhood, family and finding ways to change the inevitable…

On one impossible day in…1965, eight-year-old Willa Waters receives a mysterious box containing a jar of water and the instruction: ‘One ocean: plant in the backyard.’ So she does – and somehow creates an extraordinary time-slip that allows her to visit her future selves.

On one impossible day in…1990, Willa is 33 and a mother-of-two when her childhood self magically appears in her backyard. But she’s also a woman haunted by memories of her dark past – and is on the brink of a decision that will have tragic repercussions . . .

On one impossible day in…2050 Willa is a silver-haired, gumboot-loving 93-year-old whose memory is fading fast. Yet she knows there’s something she has to remember, a warning she must give her past selves about a terrible event in 1990…If only she could recall what it was.

Can the three Willas come together, to heal their past and save their future…before it’s too late?”

Tabitha Bird’s stunning debut is a magical, life-affirming novel about heartbreak, healing and learning to forgive yourself.

I had the chance to interview Tabitha about the process of writing a book like this. I wanted to know how she succeeded at writing about the same character at three different points in her life.

Karissa Knox Sorrell: Your book is about Willa at three different ages of her life. How did you come up with this idea?

Tabitha Bird: The idea grew very organically out of my own healing journey. Eleven years ago I was in counselling and struggling to heal from childhood trauma. Early in those sessions my counsellor asked me, “What does the pain look like?” I became interested in the idea that pain could have texture, colour and, most powerfully for me, the thought that pain could have a voice. Through many emails, I began sending this counsellor writings about a character named Beast and a little girl he had locked in the cave of my heart. This would later become a memoir and much later this little girl character became the seed of the idea behind Super Gumboots Willa.

I often wondered what might happen if I could go back and meet my younger self. What would I tell her? And then I became interested in the notion of what an older version of myself might want my ‘present day self’ to know. Silver Willa and Middle Willa were born out of this.

I then used magical realism to show the past, present and future as actual characters. This idea both enchanted me and challenged me. It’s incredibly confronting to have to think though the ramifications of our present choices on a future life and what we might want to then go back and tell our past selves.

KKS: How did you decide which ages to write about?

TB: Eight years old is an age at which I have a great deal of very clear memories. It is also an age at which children are still very innocent and imaginative, but able to be aware enough of the adult world so as to give some good insight into their surroundings and situation. The character of Super Gumboots Willa benefited from all of this.

Thirty-three was simply the age at which I began writing and a lot of my healing started here too. I symbolically made Middle Willa thirty-three.
Silver Willa’s age was a bit more arbitrary. I needed an older character struggling with memory and self-care, but not so old as to have the book set so far into the future that my ‘insights or setting’ of that time period might become unbelievable. Ninety-three seemed to fit in with the other Willa’s ages well.

KKS: How did you develop her character at three different ages?

TB: This was probably the most difficult part. Willa needed to be three distinct characters and yet we needed to see her as one complete person simply portrayed at three separate ages. I spent a lot of time thinking about how each Willa would view her world, her unique circumstances at that time in her life and how what had happened to her so far might inform her choices and the way in which she interacted with the world.

I also looked for key similarities that all three might share. The gumboots, the dreams of becoming a picture book maker, the desire to overcome, the courage and hopefulness. Even the fact that all three do have an imagination, even though Middle Willa’s is initially repressed.

KKS: What was challenging about writing the book this way?

TB: There were many days when I felt that the Willas were running amok and I was powerless to stop them! This was a very challenging story to write. Not only is it vulnerable and easily the bravest thing I have done to date, but those Willas were a lot to keep track of. I had a document of over 10,000 words on my computer titled ‘Where are the Willas.’ In this document I tried to keep track of what time period each Willa was in, what day it was in their time period, what had just happened to them and which Willa they last had interaction with! It was a large undertaking!

There was much angst over deciding what Willa needed to turn up in the story next to both move the plot forward but also to provoke growth in the other Willas. Ultimately it was all worth it and I am proud of the end result.

KKS: Are there any existing characters or books that inspired you or helped you develop Willa’s character?

TB: I love A MAN CALLED OVE by Fredrik Backman. Ove is an elderly man who is set in his ways, but with a heart larger than most and filled with great capacity for love. This character inspired me. I also love the novel LOST AND FOUND by Brooke Davis. There’s a seven-year-old character in that story who has a lot of courage in the face of great loss and sadness. This character also inspired me while writing Super Gumboots Willa.

KKS: Which age of Willa’s was your favorite to write?

TB: Silver Willa, hands down! She made me giggle with all her wise-crackery. She also reminded me that there was always hope for the future if I simply kept going. Her wisdom was often lost on those around her, but for me she spoke more truth in her muddling than most of us do in all or supposed clarity. She knew a thing or two about living and healing and embracing who we are at all of the ages we have ever been.

KKS: If we asked 93-year-old Willa what her favorite age was, what do you think she would say?

TB: No doubt she’d tell us to put the kettle on, get some jam drops and stay for a cup of tea and cookies. When she got around to answering the question, no doubt after several reminders, she’d probably say, “My favourite age is the one I am right now. No sense wishing for things past or things future. Now be a good dear and get me another jam drop cookie!”

A Lifetime of Impossible Days is available for purchase now.

Tabitha Bird is a writer and poet who lives and works in the rural township of Boonah, Queensland. By day Tabitha may be found painting, working on her next book or with her husband, three beautiful boys and Chihuahua. Find her on Twitter, Instagram, or Facebook.