Angel Island is the small, green-forested island that complements the picture-postcard scenery of Alcatraz Island, the Golden Gate Bridge, and the San Francisco Bay. Hard to consider, when looking at the natural pastoral beauty of Angel Island, that the island was the setting for one of the most brutal chapters in the history of American immigration. From 1910 to 1940, Angel Island served as the principal immigration facility for the 175,000 Chinese and 60,000 Japanese immigrants coming to the West Coast. During those years, Angel Island was the brute force applied to Chinese immigrants to enforce one of the worst legislative acts against U.S. immigration: the 1882 Chinese Exclusion Act. Angel Island was no Ellis Island in New York Harbor. At Ellis Island, immigrants were (or were not) admitted to the country in a matter of hours. At Angel Island, Chinese immigrants were held for months—sometimes over a year—undergoing intense interrogations in an attempt to trip up the immigrants’ histories and send them back to China. 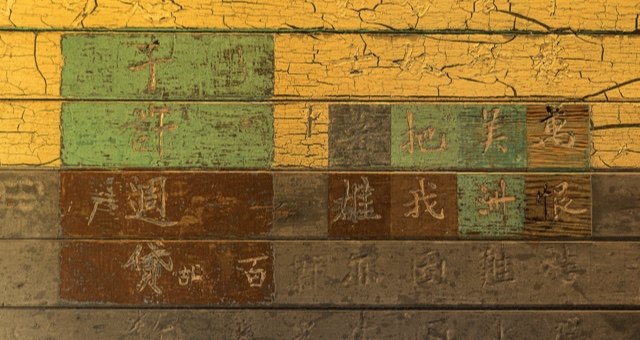 Photo by by Frank Schulenburg

Angel Island is open for visitors to experience the tremendous importance of this poetry: it is a testament to the strength and fortitude undergone by these Chinese immigrants—a triumph over the brutality that challenged every Chinese immigrant coming to America.

A small collection of the Angel Island poetry is reprinted below. Please check out the definitive book of Angel Island’s History of Immigration, The Island: Poetry and History of Chinese Immigration on Angel Island, 1910-1940 by Him Mark Lai, Genny Lim and Judy Yung, eds., 1991, 2014

Four days before the Qiqiao Festival,
I boarded the steamship for America.
Time flew like a shooting arrow.
Already, a cool autumn has passed.
Counting on my fingers, several months have elapsed.
Still I am at the beginning of the road.
I have yet to be interrogated.
My heart is nervous with anticipation.


in jail.
Imprisoned, I am melancholy; even when I eat, my heart is troubled.
They treat us Chinese badly and feed us yellowed greens.
My weak physique cannot take it; I am truly miserable.

Shocking news, truly sad, reached my ears.
We mourn you. When will they wrap your corpse for return?
You cannot close your eyes.
Whom are you depending on to voice your complaints?
If you had foresight, you should have regretted coming here.
Now you will be forever sad and forever resentful.
Thinking of the village, one can only futilely face the Terrace for
Gazing Homeward.
Before you could fulfill your ambition, you were buried beneath
clay and earth,
I know that even death could not destroy your ambition.

On a long voyage I travelled across the sea.
Feeding on wind and sleeping on dew, I tasted on hardships.
Even though Su We was detained among the barbarians, he would
one day return home.
When he encountered a snow storm, Wengong sighed, thinking of
bygone years.
In days of old, heroes underwent many ordeals.
I am, in the end, a man whose goal is unfulfilled.
Let this be an expression of the torment which fills my belly.
Leave this as a memento to encourage fellow souls.

Leaving behind my writing brush and removing my sword, I came to    America.
Who was to know two streams of tears would flow upon arriving here?
If there comes a day when I will have attained my ambition and become
successful,
I will certainly behead the barbarians and spare not a single blade
of grass.

Being idle in the wooden building, I opened a window.
The morning breeze and bright moon lingered together.
I reminisce the native village far away, cut off by clouds and
mountains?
On the little island the wailing of cold, wild geese can be faintly
heard.
The hero who has lost his way can talk meaninglessly of the sword.
The poet at the end of the road can only ascend a tower.
One should know that when the country is weak, the people’s spirit
dies.
Why else do we come to this place to be imprisoned?

The dragon out of water is humiliated by ants;
The fierce tiger who is caged is baited by a child.
As long as I am imprisoned, how can I dare strive for supremacy?
An advantageous position for revenge will surely come one day.

From now on, I am departing far from this building.
All of my fellow villagers are rejoicing with me.
Don’t say that everything within us is Western styled,
Even if it is built of jade, it has turned into a cage.

I intended to come to America to earn a living.
The Western styled buildings are lofty; but I have not the luck to live in them.
How was anyone to know that my dwelling place would be a prison?