We’ve all been talking about the royal family thanks to a certain young Archie, so I figured now was a good time to talk royals! It doesn’t hurt that we’ve had some new additions to the abundance of royals from all time periods and places we’ve been acquiring for the last several decades.

You know what are my favorites, though? When royals find themselves in Situations. You know, those things they fall (or accidentally talk themselves) into, that they have to figure out their way out of. If they happen to fall in love on the way, well, that’s not completely a problem, is it? Especially if they get a Happily Ever After out of it.

You might even say this was a Tropetonite for me.

(Tropetonite (n): a particular romance trope that we will always fall for, that make us weak, that will make us break our book-buying ban for just a moment.) 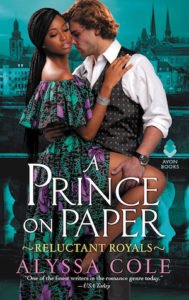 The most recent example of this is A Prince on Paper by Alyssa Cole, which I adored. Nya and Prince Johan have been skirting around each other for quite some time, until they are thrown together at the wedding celebration of mutual friends (A Princess in Theory’s Naledi and Thabiso). There, they find themselves in A Situation. If Nya accepts Johan’s accidental proposal of marriage, they can both help some of the related situations they’ve got to deal with. It’s just…so delightful.  (Also delightful? The rest of the Reluctant Royals series. Both novels and the supporting novellas.)

But if you want to go back a little further, there’s also Talia Hibbert’s The Princess Trap, in which a similarly non-inheriting prince makes a deal for a fake engagement and trip to his home. But these two have a very different kind of relationship, and Cherry is a very different kind of fake fiancee than Nya. This one has a content warning at the beginning that you should check out. 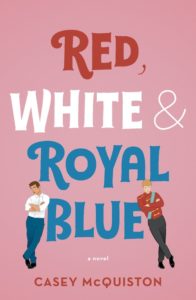 Okay, so there’s only one of these that I can think of, but if you know about any, please let me know. Because Red, White, and Royal Blue by Casey McQuiston is just…delightful. And I need more like it. Here, we’ve got Alex, the college-aged first son living in the White House while he goes to Georgetown. Alex Claremont-Diaz, the brilliant, outspoken, half-Mexican son of the first female president of the U.S. who also…might not be straight?…provides his point of view in this new adult romance in which said FSOTUS goes from hate to respect to friendship to oh-shit-I’m-in-love in 500 very fast pages. He’s Draco Malfoy–level obsessed with hating Henry, the Prince of Wales, and it all comes to a head at Henry’s brother’s wedding. The solution their People agree on? They pretend they’ve been best friends forever and were just horsing around. But then they…might actually have become friends? And maybe…something else?

(The most annoying thing about reading the debut of an amazing author two days before it releases? Not even knowing when their next book is coming out! How do I already have no Casey McQuiston books to read?) 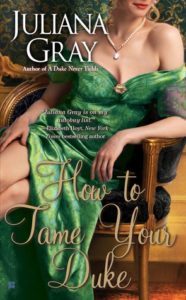 How to Tame Your Duke by Juliana Gray

Sometimes, princesses seem to need to go on the run. This could be in part because their whole family has to go into exile. A delightful execution of this need is in How to Tame Your Duke by Juliana Gray. Sophie is a princess in disguise, working as a tutor in a duke’s household. There’s some Beauty and the Beast vibe, and secret liaisons, and some super witty, fun writing.

Want to go to a different place and time? There’s also Butterfly Swords, in which a princess needs out of an arranged marriage and accepts the help of a white traveler when her first plan goes wrong. It’s a road trip romance, with a princess and a soldier, and is also a lot about family, communication, and duty. All of the Tang Dynasty books are just great, and this is the perfect place to start with Jeannie Lin if you haven’t yet.