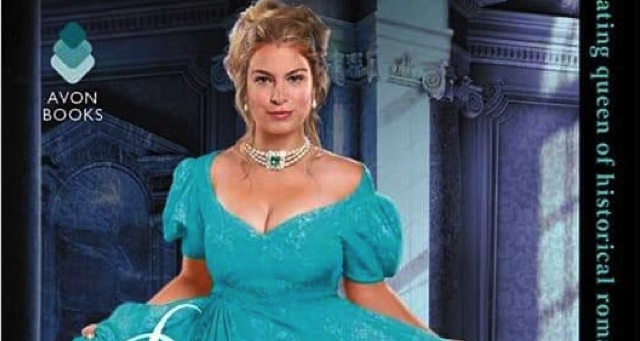 Getting recommendations for romance novels in this day and age is as easy as hitting up your nearest search engine and typing in whatever tropes you enjoy. Finding love stories set everywhere from your nearest suburb or metropolis to outer space isn’t difficult, but as varied as these stories might be, curvy heroines aren’t as easy to spot when you’re browsing through the romance shelves at your local bookstore. 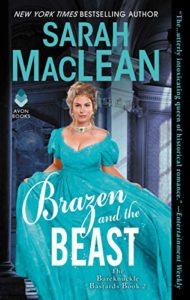 In her latest novel, Brazen and the Beast, Sarah MacLean is placing a fat heroine squarely in the spotlight—Hattie is determined, honest, witty, and an absolute delight to see on the page. As a longtime fan of Sarah’s previous series, I was happy to speak to Sarah about Brazen, writing fat characters, and the rules she’s learned to break as she grows in her feminism.


both stories have highlighted different aspects of politics and privilege and consent in relationships (and not just romantic ones). Was it clear from the start of the series what you wanted to focus on with each book, and what did you learn about your writing as you wrote them?

Sarah MacLean: When I conceive of a series, it’s always with the idea of approaching a single theme from multiple angles. This one is about the way so many of us are haunted by our past—sometimes so much that we risk our future happiness. Where do we come from? What were the fires in which we were forged? These are complicated questions that drive us—politically, personally, romantically—and that’s what The Bareknuckle Bastards is about.

I learn something new about myself and my writing with every book.
Brazen [and the Beast] feels very much like I’m returning to my roots. When you start out writing, no one tells you that the craft gets more and more challenging—of course it does!—you learn to predict mistakes and pitfalls and challenges, and your instinct is to listen to those predictions and navigate around them. With Brazen, I set out to write a book that navigated through those sticky places—to write the characters, the plot, the conflict, the sex—all as fearlessly as possible. This book taught me that I could still write with fearlessness and the result, I hope, is a book that is, as Max Perkins liked to say, “alive from beginning to end.”

AC: Hattie is a plus-size heroine, one of a still very small number in romance novels. How did you find your way into her story? Is there a particular scene that you feel encompasses who she is as a person, and what is your favourite thing about that scene?

Category ID: 15789
Category ID: 475
Kissing Books Newsletter
Sign up for Kissing Books to receive news, book recommendations, and more for residents of Romancelandia.
Thank you for signing up! Keep an eye on your inbox.
By signing up you agree to our terms of use

SM: Honestly, Hattie came to me nearly fully formed. I never had any trouble understanding her—we both have big bodies, big personalities, and we don’t do much in half-measures. And we both live in a world that judges us for all of those qualities.

My favorite scene in the book is a bit of a spoiler! But there’s a moment when Hattie has everything taken from her—her dreams, her business, and the possibility of love, and instead of accepting it as inevitable, she fights back, using every one of her strengths to fight for what she believes she deserves. Because if she’s going to go down—she’s going to do it fighting. #shero

AC: As a fat woman, I’m used to seeing fat characters demeaned
and ridiculed both outright and in really insidious, quiet ways. In Brazen and the Beast, Hattie’s fatness is one part of her, but does not define her completely, nor is it made into a reason to laugh at her. What are your hopes for fat characters like Hattie in romance and in literature in general? Do you have any recommendations for readers who want more plus-size leads in their books?

Hattie isn’t my first plus-sized heroine (I’ve written several, including the heroine of my very first romance, Nine Rules to Break When Romancing a Rake), but she’s very different from the others. It was important to me that Hattie exist on the page as someone who wasn’t constantly thinking about her body. Certainly, she is aware of her size. I’m a fat woman and nearly six feet tall, and keenly aware of my size in relationship to others. I struggle every day to love my body and the things it can do—that’s the result of living in a society that is so conscious of size. I didn’t want to ignore that with Hattie. But she’s also strong and healthy and able to wield a knife in a pinch, and she and Whit are so perfectly matched in their intense physical desire for each other—and I think that match only serves to make their romance more sexy.

We also did a Curvy Heroines interstitial episode on my podcast: Fated Mates, which might be fun to listen to for anyone who loves a curvy heroine in books!

AC: The “Year of Hattie” is one of my favourite things I’ve read in a book, and I was absolutely delighted by how Hattie goes after the things she wants, with confidence and trust in herself. Have you had a “Year of Sarah” and if so, what did it bring into your life? If not, what would you like to do during that year?

SM: Let’s all have a Year of Us! Don’t we all deserve it—especially in 2019? The best thing about The Year of Hattie, is that she’s claiming *herself*—identifying her own pleasure, her own desire, her own happiness, and aiming for it. And why shouldn’t we all have a chance to aim for those things?

What if we all acknowledged that simple satisfactions aren’t so far out of reach as they sometimes seem, and we just agreed to reach for them when they presented themselves? I’ve never taken a Year of Sarah, but if I did, I think aiming for happiness and pleasure—making the conscious choice for joy—would be my goal. I’d like to wake up every morning and say “what will give me pleasure today?” And do that. Drink coffee, write a book, read a romance novel, play with my kid a bit more, love my partner a bit more…love myself a bit more.

AC: In 2017, you wrote about unpacking the idea of the “alpha hero,” and what that meant for the romance stories you created going forward. Whit is a tough man, but his fears and insecurities ground the story just as much as Hattie’s personality and choices do.

SM: Full disclosure, Whit might be my favorite of all my heroes, because he is so many conflicting ideas all in one. If Hattie is the present of this book, Whit is the past—it’s the story of him overcoming all the bits and pieces that keep him from living his fullest, best life. It might be The Year of Hattie, but at some point, it becomes the Year of Whit!

He’s a survivor, and he’s assumed this mantle of “savior”—taking on the burden of keeping his community, his family, and Hattie safe…to the detriment of his own happiness. It’s funny, because I’ve seen him described as a “cinnamon roll” more than once—but for me, Whit is all the best parts of the alpha: care-taking, loving, strong, and focused entirely on Hattie’s pleasure. What’s not to love?

AC: As a very vocal feminist, you’ve been asked countless times if/how romance can be feminist—and we know it is! You’ve also talked about writing in this “breaking of the rules” into all of your books. Are there “rules” you’ve learned to break both in your life and your writing as you’ve grown in your feminism?

SM: I have always thought of romance as a revolutionary political text—there’s nothing more subversive than seeing marginalized people live happiness in the face of patriarchy—and that hasn’t changed over the ten years I’ve been writing it. So I’d say that the only rule I ascribe to in my life and my writing is an anti-rule: Be loud about things that matter.

AC: Just as Hattie embarks on a new life for herself in this book, all of us embark on our own new eras at one point or another. What would you tell 2009 Sarah about starting something new, and what advice would you give her?

SM: Well, 2009 Sarah was just publishing her first book, so I’d tell her not to worry so much. That she was going to be ok. That the work would get harder, but the books would get better…and that she shouldn’t spend so much time on Twitter.

New York Times bestselling author Sarah MacLean returns with the next book in the Bareknuckle Bastards series about three brothers bound by a secret that they cannot escape—and the women who bring them to their knees.

When Lady Henrietta Sedley declares her twenty-ninth year her own, she has plans to inherit her father’s business, to make her own fortune, and to live her own life. But first, she intends to experience a taste of the pleasure she’ll forgo as a confirmed spinster. Everything is going perfectly…until she discovers the most beautiful man she’s ever seen tied up in her carriage and threatening to ruin the Year of Hattie before it’s even begun.

When he wakes in a carriage at Hattie’s feet, Whit, a king of Covent Garden known to all the world as Beast, can’t help but wonder about the strange woman who frees him—especially when he discovers she’s headed for a night of pleasure…on his turf. He is more than happy to offer Hattie all she desires…for a price.

Soon, Hattie and Whit find themselves rivals in business and pleasure. She won’t give up her plans; he won’t give up his power…and neither of them sees that if they’re not careful, they’ll have no choice but to give up everything…including their hearts.