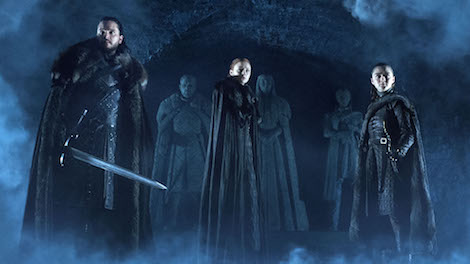 People with this personality type can often appear intimidating at first glance because of their seriousness, strict adherence to rules, and dedication to hard work and responsibility. ISTJs are highly intellectual and analytical. Stannis Baratheon is a classic ISTJ character because he embodies all of these characteristics as a no-nonsense lover of rules, tradition, and hard work. And who can forget those classic ISTJ moments when he corrected grammar mistakes?

Although INFJs are one of the rarest of the Meyers-Briggs types, Game of Thrones boasts quite a few INFJ characters. The most INFJ of them all, however, is Bran Stark, who perfectly embodies the personality of an INFJ: introspective, visionary, perceptive, and, yes, at times a little off the beaten path. In typical INFJ fashion, Bran Stark is a loner who seeks meaning in the world through solitary reflection. And yet in spite of this need for solitude, INFJs are still caring individuals who consider the needs of others. This is why, despite our complaint about the ending of the show, Bran will make an exceptional leader.

INTJs are known for being self-sufficient, preferring to work on their own toward whatever their goals are. And who is more self-sufficient than Petyr Baelish, the man who attempted to play everyone in Westeros in order to get his way? And while Littlefinger’s plans didn’t always pan out the way he wanted them to, the fact that the man was so dedicated to forming plans and playing out life like a game of chess makes him a perfect example of an INTJ Meyers-Briggs personality type.

Much like her brother Bran, Sansa Stark has grown into an excellent leader, but for very different reasons. As an ENFJ, Sansa Stark is highly concerned with other people and making sure the people she cares about (in this case, the people of the North) get what they want to remain happy. ENFJs are idealists, and they’re not afraid to speak up about their beliefs in order to maintain their ideals and moral values. Think about how Sansa stands up to Daenerys when she doesn’t seem to have the people of the North’s best interests in mind. In addition, ENFJs are great communicators who are generally well-liked. Say what you want about Sansa, but people generally like her, something even Daenerys had to begrudgingly recognize.

Arya Stark is a classic example of an ISTP: she’s logical and rational but can also be spontaneous and unpredictable. This unpredictability is why ISTPs are often thought of as mysterious, and what is more mysterious than a person who can literally change their appearance in order to assassinate people? As a sort of defense mechanism, ISTPs are masters at hiding their true selves from the world at large. Also, they’re risk takers. Going west past where maps are drawn to see what’s out there in the mysterious beyond? Sounds fun.

Good ole Ned Stark might have left us too soon back in Season 1 of Game of Thrones, but he’s still an integral part of this series and the perfect example of an ESFJ. As an ESFJ, Ned Stark puts friends first (see: his deep friendship and blind loyalty to his pal Robert Baratheon) and is extremely compassionate and empathetic. Indeed, in his short time on the show, Ned Stark can be seen being warm and supportive to his friends and family. He also displayed a strong work ethic and a willingness to help others.

Another character who was taken from our Game of Thrones lives too soon, Oberyn Martell is a total ESFP. Who can forget Oberyn’s over-the-top showboating during his epic fight with the Mountain? ESFPs love to be the center of attention and they were born to perform. In typical ESFP fashion, The Viper is also playful and optimistic, in spite of all the horrors that have befallen his family. ESFPs are well-liked and popular, just like Oberyn, who always will be a fan favorite.

INFPs prefer not to talk about themselves. Rather, they enjoy looking at the world around them, observing and reflecting upon what they see and learn. Sounds like a certain book-loving former member of the Night’s Watch, right? For Samwell Tarly, who is an INFP to his core, staying in and analyzing hidden meanings in old books sounds like the perfect Saturday night. INFPs are also kind and work hard to avoid hurting other people’s feelings while at the same time being overly judgmental and hard on themselves. We can see these traits in Samwell throughout the Game of Thrones series, but perhaps especially in the final episode when he suggests democracy for Westeros but then quickly dismisses the idea when he sees everyone else thinks it’s stupid. As an INFP, Samwell has difficulty standing up for himself.

Remember when Daenerys Targaryen suggested that she and Jon Snow could break the wheel together? Yeah, total ENFP move. ENFPs are individualists who refuse to live life by any standard rules. They’re all about thinking outside of the box and creating their own way of doing things. Thinking about telling an ENFP what to do? Think again, especially if that ENFP is Daenerys Targaryen and has literal dragons. ENFPs are also hardworking and pretty much excel at whatever they set out to do. See: the majority of Daenerys’s story arc up until her nephew messed things up for her.

Much like their nickname would suggest, ESTPs don’t think, they do. Certainly this makes Jaime Lannister, a man of action, a great example of an ESTP. Look, when Bran caught Jaime with Cersei in the tower, Jaime didn’t think; he just tossed the boy out of a window. ESTPs live for the moment and want to see immediate results; as such, they can be a little spontaneous, not considering what consequences their actions might have further down the line. ESTPs aren’t total dummies, however; they’re great at talking to people and getting what they want from others. And like Jaime, ESTPs tend to be seen as stylish and attractive.

Who is more of an ESTJ than Olenna Tyrell, a woman who embodies the dignity and strong will of your typical ESTJ personality? ESTJs are experts at plotting and strategizing; unlike the Jaime Lannisters of the world, ESTJs always think before they act. They’re also never afraid to do what they see as morally correct, even if it’s a more challenging and difficult path. For instance, an ESTJ wouldn’t be afraid to poison a king if he were a dangerous, maniacal douchebag. ESTJs are natural-born leaders and are often seen as role models. Honestly, if Olenna Tyrell isn’t one of your personal role models, I don’t know what to do with you.

There’s no getting around it: Varys is the most INTP person in all of Westeros. Of all the Myers-Briggs personality types, INTPs are the most logical, valuing intelligence and knowledge over all else. They tend to be loners, and others might think of them as unconventional. But INTPs don’t care AT ALL about what others think of them, so whatever. Is this sounding a lot like a Varys the Spider? Like Varys, INTPs don’t care about loyalties. They simply care about doing what’s logical. So if a certain queen they were following went mad, an INTP wouldn’t be afraid to turn against her if that’s the logical thing to do.

ENTJs are natural-born leaders who like being in charge. See: Cersei Lannister, who spends her whole life striving to be in control and in charge, despite whatever obstacles are set in front of her. As an ENTJ, Cersei Lannister is confident in her abilities and never questions her own intelligence or her leadership skills (although maybe sometimes she should). While ENTJs like Cersei are extroverts who thrive off of the energy of others, they can have difficulty forming deep meaningful connections because of their inability to see things from a perspective other than her own. Perhaps that’s why Cersei Lannister’s most meaningful connection is with the person most like her: her twin brother. Oh, and wine. She has a deep meaningful connection with wine, too.

Sweet Jorah Mormont of Bear Island is a devoted and kind ISFJ. ISFJs are blindly loyal and will protect those that they care about generously and unselfishly. Who can ever forget how bravely Jorah protects his queen Daenerys in the Battle of Winterfell? And while Daenerys at times has her doubts about him, Jorah proves himself time and time again to be a loyal and devoted follower. As an ISFJ, Jorah is warm-hearted and dependable.

ENTPs are some of the rarest of all the personality types because while they are extroverted, they also have a difficult time making small talk and relating to people who they don’t find intellectually stimulating. Like Tyrion Lannister, ENTPS prefer deep intellectual conversations with people whom they consider their equals. ENTPs are good problem-solvers who prefer creating ideas and theorizing over actually doing the heavy lifting. Think about how often we’ve seen Tyrion drinking wine and theorizing versus actually doing work.

ISFPs are sensitive, passionate, sympathetic, and eager to please. Kind of exactly like our favorite secret Targaryen/Stark lovechild Jon Snow. Just like your average ISFP, Jon Snow has issues with self esteem at times—which is BONKERS because if I came back from the dead I would think of myself as pretty dang special, but then again I’m not an ISFP, so there you go. An ISFP’s love language is acts of service. So, just as an example, an ISFP might, say, kill a queen to protect his siblings. An ISFP craves adventure and is not one for a life of restrictions, which is why Jon Snow is probably better off with the Wildlings rather than being cooped up in King’s Landing ruling a kingdom. Also, rumor has it that ISFPs know nothing. Just saying.