There are so many songs out there that tell whole narratives. Wayne Cochran’s “Last Kiss,” “Tribute” by Tenacious D, and “M.T.A.” by The Kingston Trio among many, many others come to mind easily. In fact, in middle school, my Language Arts teacher assigned us a partnered writing project: we were to write a short piece of fiction. My friend and I were both really into music, as adolescents often are, and we decided we would write an adaptation of a song. We debated on which to do (“The Devil Went Down to Georgia” by the Charlie Daniels Band or “Quinn the Esk*mo” [reminder that this term is considered offensive and you should use something else] by Bob Dylan, which somehow I understood to be about cocaine and therefore inappropriate for a middle school assignment—we went with Charlie Daniels). Later, in high school, I spent a lot of my art class and free time illustrating some of my favorite lyrics and songs. All of this got me thinking recently—how cool would a list of songs that should be graphic novels be?

Some of these songs may not have quite enough narrative content for a whole graphic novel, but might make great graphic short stories (anthology, anyone?) or would be fine with a little padding thanks to creative license. I’m convinced that all of these are songs that should be graphic novels, though. And I want to hear what yours are, too. Be sure to tell us in the comments! 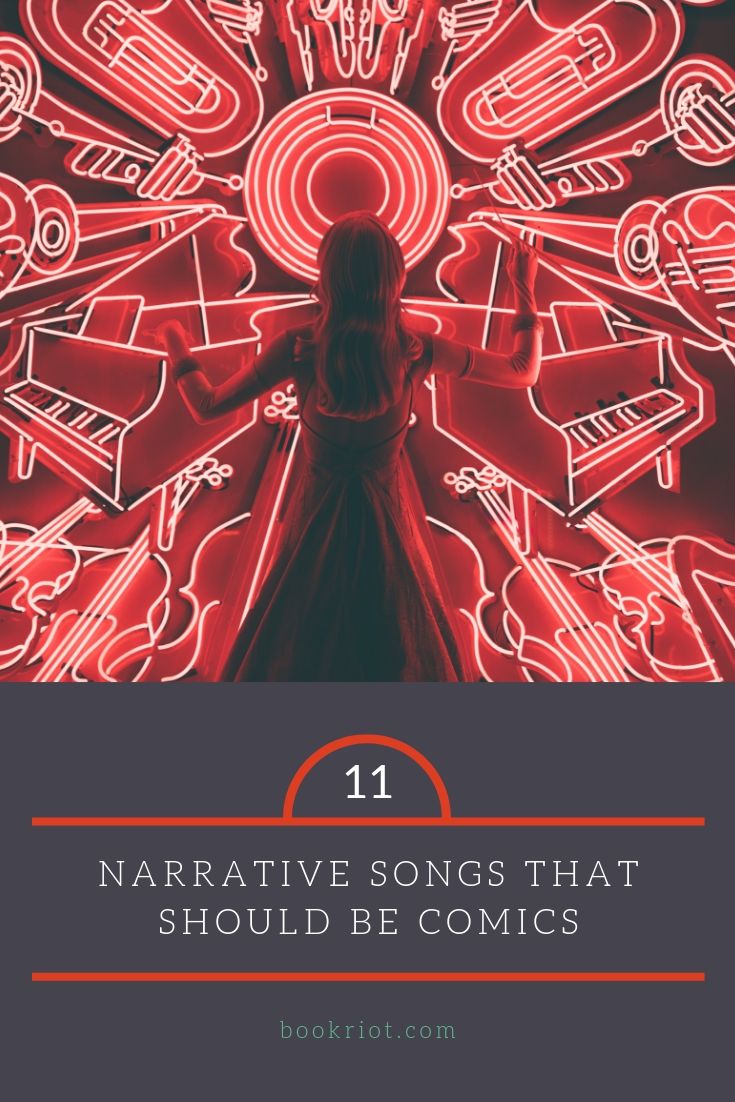 11 Songs That Should Be Graphic Novels

It’s important that the graphic novel adaptation of “Proud Mary” is based off of the Ike and Tina Turner version. I love some Creedence Clearwater Revival, but you really can’t beat the energy in the Turners’ “Proud Mary.” This graphic novel might have a montage of a hardworking woman day after day in her various jobs, finally finding freedom and joy on the river boat Proud Mary. With not a ton of narrative structure, this song is an easy one to build a whole story around and I love a good story about a woman on her grind. (And, let’s be real, Tina carried that entire song and Ike was an abuser.)

“The Devil Went Down to Georgia” by The Charlie Daniels Band

As it happens, Charlie Daniels did write a prose version of his band’s most famous tune in a collection titled The Devil Went Down to Georgia. But I really need a graphic interpretation. The lyrics evoke such strong visual imagery that it demands to be illustrated while the story already has plenty for someone to explore. As far as songs that should be graphic novels go, this is at the top of my wish list.

A number of Prince songs would make excellent graphic novels, but I have to say “Raspberry Beret” is probably my favorite. Not only is it super catchy, but the singular image alone of a raspberry beret is so striking, that creating a visual of the song is so obvious. Fortunately, Prince also provides a story to go along with the mysterious raspberry beret-ed woman and his five-and-dime clerk persona. I’d love to see this love story play out in a graphic novel.

Although “American Pie” doesn’t necessarily tell a linear story, its recollection of “the Day the Music Died” (February 3, 1959, when Buddy Holly, Ritchie Valens, and “The Big Bopper” J.P. Richardson perished in a plane crash) with a series of quintessential American icons makes for a compelling graphic novel concept. The narrator’s story of love lost starts off pretty clearly but quickly descends into a sort of nonsensical fever dream involving references to the Beatles, nursery rhymes, football games, and a number of other seemingly random things. Trippy, for sure, and perfect for a graphic adaptation.

I struggled to pick between “Jolene” and “9 to 5,” but ultimately, “Jolene” won out (mostly because “9 to 5” already has a whole movie). You can’t deny that Parton’s sultry description of the title character would make for a great graphic novel antagonist. There may not be a lot to the story in “Jolene,” but there’s plenty inspiration to be had for expanding the narrative. Meanwhile, I can’t be the only one who thinks of Poison Ivy when this song comes on.

“Son of a Preacher Man” by Dusty Springfield

On the flip side of Cobra Starship, Billy Ray of “Son of a Preacher Man” evidently makes those bad girls go good or something like that if the narrator of the song is reliable. This fun and loose story has so much potential for illustration aesthetics and I need it yesterday. Although the singer was born in England, her name and the content of the song evokes a Southern suburbia vibe that just begs to be adapted with a soft, pastel-and-gingham approach.

I’m cheating with this one, a little. “Boy Named Sue,” originally written by Shel Silverstein, appeared first in print before Johnny Cash made it extra famous. Touched with humor and twisted darkness, the story of Sue has a ton of great images right in the lyrics: “Just this old guitar and an empty bottle of booze,” “He kicked like a mule and he bit like a crocodile,” “At an old saloon on a street of mud”…seriously, it’s incredibly vivid. Do we need more western comics? I don’t know—but I do know we need “Boy Named Sue” in technicolor panels.

We have John Lewis’s autobiographical March series, and how great would “Change Gonna Come” be as a companion piece? Released in 1964, this song of hardship and optimism offers some interesting textures for an author and illustrator to work with.

“All I Could Do Was Cry” by Etta James

A tragic story of unrequited love, “All I Could Do Was Cry” might serve best as a comic, but like many of the other songs on this list, could be expanded to a complete novel-length work with some added backstory. While comics may traditionally be full of plenty of action, there’s no saying a more emotional kind of drama can’t work. While the narrator laments her love’s marriage to another, the song has lots of texture to guide a graphic adaptation.

Is this the real life? Is this just fantasy? If ever there was an opening for a graphic novel, this was it. From a murder to a battle over the narrator, there are more than enough plot points for a thrilling and action-packed graphic novel. Freddie Mercury’s many allusions create several opportunities for writers and illustrators to pull in references to other works and mythology and I have no doubt a graphic adaptation of “Bohemian Rhapsody” would be as stunning and invigorating as the song itself.

After Madonna’s narrator and her lover discover they have a baby on the way, the narrator pleads with her father to help them out and skip the lecture. It’s an interesting song in which the lyrics admit going against dear old dad’s advice and with disastrous results. The song raises a lot of interesting questions any graphic novel author and artist might provide answers for, and who doesn’t want a comic with heavy 1980s-style aesthetics?

What songs on your playlist that you think should be comics?