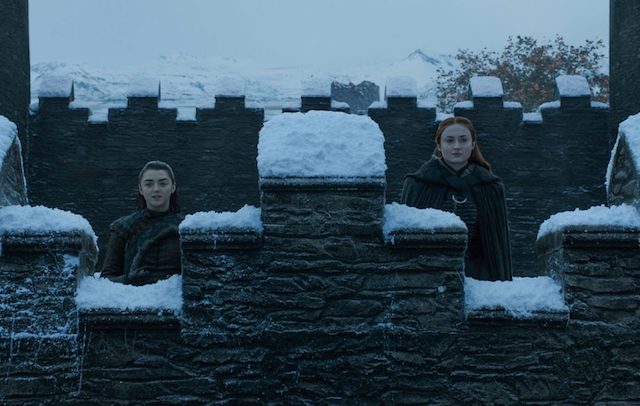 When my sister and I were growing up, particularly when we began to hit our teens, we found we weren’t at all alike. We responded to conflict differently. We had different goals. We were laden with different expectations. We struggled with many of the same issues, but in different ways. And so we clashed. And eventually, we just sort of stood apart.

And then, not long after Season 2 of Game of Thrones aired, I went to college, and we really were apart. I can’t speak for my sister, but for me, that’s when it began. As I grew, and as she grew, I started slowly feeling an ache of something that was missing. I began to miss my sister, even though I’d never really felt I’d known her. I began to see the ways we could lean on each other, even if they were small, even if they were without names.

if you assume all I do during the day is think about the Stark sisters, you’d be 100% correct !

I was in love with Arya and Sansa Stark from the early seasons, when I still mostly watched it with my family. Sansa struggled and persisted in a world where her dreams floundered into nightmares; Arya was cast out into the world to learn how to fight. Both were largely independent and alone: Arya often literally, while Sansa was alone in a sea of scheming; both had many mentors but few friends. Sansa grows into a strong leader capable of singlehandedly running Winterfell, easily handling other political schemers, and inspiring others. Arya grows into a strong, immensely skilled fighter who makes difficult choices, lashes out at those who threaten her family, and can live, explore, and stand on her own. And in Season 7, Arya returned home and they were reunited.

I’ve often either seen siblings in media who have tumultuous ups and downs or who are best friends and have always been best friends. I don’t think we often enough get to see a full story of a sibling relationship truly evolve. We got to see Sansa and Arya grow. We saw them leave each other, then we saw them truly separate, and then we saw them reunite completely different people still.

A post shared by Entertainment Weekly (@entertainmentweekly) on Mar 4, 2019 at 9:32am PST

Most importantly for me, in that reunion, there was no sudden camaraderie. There was no forced sharing—Sansa did not learn to be Arya, or Arya to be Sansa. They didn’t share the full stories of where they had been in between. They didn’t give each other long heart-to-hearts, or rehash the past until they had reached some formal understanding. There was no slumber party where Sansa told Arya the abuse she suffered under Joffrey, or where Arya explained her long days with the Hound and the day they turned away from Riverrun.

And I love that. Because they didn’t have to grow towards each other. They grew upwards, “the sun and the moon,” as Ned called them, and rotated around the same earth. They never got closer by literally closing the distance. They never dug into the other’s psyche. What they did is learn to appreciate what the other had. They each grew into their own full self, and then they looked at each other in the present moment and decided to stand together.

There are two moments from the last few seasons that, together, hit me hard. In the first, Arya, in a rare moment of openness, says to Sansa, “I never could have survived what you survived.” And Sansa responds, “You would have. You’re the strongest person I know.”

The Stark sisters are everything pic.twitter.com/05jhdKhxvD

In the second, Jon is talking to Arya, and naively implies that Sansa thinks she is oh so smart, casting back for the old feud he remembers between the two sisters. And Arya, her face visibly falling, replies indignantly, “She’s the smartest person I’ve ever met.”

My sister and I will never not be different people. It’s not that we’ve changed, melted, or come together to settle old arguments or fill each other in on our life tragedies that the other missed. Even now, we don’t always share much of each other’s inner lives, and we communicate now-and-then on social media, mostly through animal videos and passionate theories about the Stark sisters. It’s when we’re together that I feel it, the new solidarity. The new feeling that if it came to it, we would have each other’s back. And Arya and Sansa didn’t need to be best friends—Arya didn’t need to giggle to Sansa about Gendry, and Sansa didn’t need to tell Arya about her hopes for the kingdom. But they understood each other, just enough. They stood by each other, in everything. And Arya would have killed for her big sister, and Sansa would have died for her little sister.

That’s why I see us so much in the Stark sisters, the sun and moon of the Game of Thrones series, the hero and the queen of the epic saga. From my point of view, we’re reflected in their story. We never had a tearful reunion out of a film, a resolution of battles, big apologies. Instead, we just drifted back into each other’s orbit, reflecting each other’s light, and respecting and supporting the women we’ve both become.