The Game of Thrones finale aired last night. But I didn’t watch it.

I’ve been a huge fan of the book series, A Song of Ice and Fire, for more than a decade. In fact, it’s what brought me and my now-husband together. He recommended the series on one of our first dates, and I fell in love with the characters and storylines as I fell in love with him. We would talk for hours about theories and ideas for where the books would go. 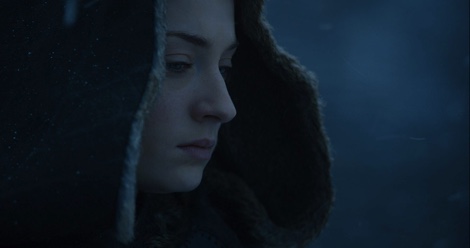 When we learned that the series would be made into an HBO show, we were thrilled. We watched religiously for the first three seasons; even when we were traveling, we’d find friends with HBO and force them to watch, too. (Really, we were doing them a favor, introducing them to our favorite show!)

But my love for the show came to a screeching halt at the beginning of season 4.

First of all, let me say—I’m not mad when the show or a movie is different from the book it was based on. In fact, I like it when that happens. It enriches the books to make the show a little different, rather than just an enactment of the events of the books. It adds to our sense of possibility, the whole reason we read and watch film to begin with—the theories of what will happen next, the exploration of an expanding universe. Changes, both large and small, can expand those possibilities and offer new perspectives.

And, as you might have been able to tell from my introduction to this piece, it’s not that the show is too nerdy for me. I love fantasy, and the nerdier the better. At the same time, I’m not mad that millions of fans are now privy to the series that once felt like a secret club (“You’ve read it too? Oh awesome!”). I’m thrilled that many more fans are watching a fantasy show and potentially reading the books as well. Welcome to the much bigger club!

But here’s the reason I stopped watching the show, and am unlikely to come back: In the third episode of season 4, there’s a scene where Cersei and Jaime have sex after their son’s funeral. It’s a daring show of defiance—siblings having sex on their son’s coffin. And in the book, the scene has one subtle but very important difference; Cersei is just as into it as Jaime is, and the impropriety of the setting only seems to fuel their passion.

“Hurry,” Cersei says in the book. “Quickly, quickly, now, do it now, do me now. Jaime Jaime Jaime.”

But in the show, the scene goes quite differently.

“Stop…it’s not right!” Cersei says on screen. “I don’t care,” Jaime replies. Five times, she tells him to stop. Yet Jaime continues on.

When a woman says no, and the man keeps going, that’s not improper or impassioned. It’s rape.

My initial confusion—what just happened?—soon mounted into discomfort and then anger as I read an interview with the director, who characterized the scene as a consensual sexy encounter.

“There wasn’t a lot of talk about it, to be honest,” Alex Graves, the episode’s director, told Vulture the next day, saying the scene was about Jaime saying “‘Hey, I came to visit, and I’m starting to feel like we could have sex’ and they have sex. It’s the last place you think anyone’s going to have sex.”

But what happened wasn’t sex, it was rape. And Graves wouldn’t acknowledge that; he seemed willfully, blissfully unaware of the difference.

Like I said before, I don’t mind changes in adapting a book to film. But the problem is, the showrunners did not seem to think this change mattered—or that it was a change at all. They turned a passionate, consensual encounter into rape, and then they continued with the story as if nothing had happened.

I knew, from reading the rest of the series, that delicate questions around rape and sex and women’s rights would continue to be prominent themes, but I no longer trusted the creators behind the show. It’s one thing to make a storytelling choice like this for a reason—to explore the fine lines between love and violence, between agency and helplessness. But for them not to recognize this encounter as rape, and to continue the storylines of Jaime and Cersei and others as if nothing had happened—it was a red flag that fundamentally altered my enjoyment of the show.

I knew I would be wondering when it would happen again; my hyperawareness of potential danger went into overdrive. I knew I would be constantly aware of the new, unaddressed dynamic between Jaime and Cersei, and I would constantly be on the watch for future sexual assault between couples. I couldn’t just ignore it as though it hadn’t happened. I had done enough of that in real life.

I suddenly saw Graves’s explanation as the gaslighting that I have had so much trouble recognizing and calling out in real life—men telling me it’s not so bad, it’s just my imagination, what’s the big deal? And I was tired of it.

Not only was I worried there would be future scenes like this, I didn’t want to put my Sunday nights (and my dollars) in the hands of men who don’t know the difference between sex and violence, between consent and violation.

I know that scene probably didn’t bother most people, and I certainly don’t judge anyone for continuing to watch the show even if it did. But for me, it was a turning point. I decided to stop watching the show.

Was I being hypersensitive? Was I making too much out of something that wasn’t a big deal—that wasn’t intended as I interpreted it?

Maybe. But here’s the thing. As a woman, I live my life with this hyper-awareness. It’s how women have to keep ourselves safe—constantly on the lookout for dangers, constantly questioning whether that encounter really went the way it did, constantly wondering whether it really was so bad.

I have to put up with that in my everyday life. I don’t need it when I want to relax—when I’m choosing to lose myself a little in a fantasy world. So I simply stopped. I opted out.

I learned that it’s okay to step back from something, especially something meant for entertainment, that brings me discomfort. There is nothing binding me to that show anymore. Just because I loved something once, doesn’t mean I have any allegiance to continue.

And, though I wish I could have kept loving and watching the show as I had before that scene, I’m glad I stopped—especially when I hear about questionable storytelling decisions around, for instance, the lives of people of color.

At least I’ll always have the books, and my memories of reading them for the first time.