Last month, we reported on Washington’s Department of Justice’s new policy that banned used book donations from nonprofits from entering into the prison system. This month, it’s been uncovered that officials in Ohio have been working toward banning books donated to prisoners with their own policy changes.

Redbird Books is a nonprofit working out of Columbus which sends used book donations to prisoners. The organization was founded in 1999 by a former prisoner named Dan Cahill. But beginning at the end of 2018, book donations began to return to the organization from the systems they’d worked with. In an interview with WOUB, Redbird Books said that a package they’d sent to Grafton Correctional Institution was returned with a note that their new policy disallowed donations of used books. The policy stated that books could only be sent if they were brand new and from a pre-approved list of vendors.

According to Books to Prisoners, which has been tracking the progress of this policy change, they aren’t the only organization to have had books returned to sender.

Redbird was added to the list of those approved to make donations to Grafton, but the policy still says those donations need to be new books, not used books.

In digging more deeply into the problem, Books to Prisoners found the sudden change in policy even more widespread. At the time of the returned mail, the state hadn’t yet enacted a new policy, but many prisons throughout Ohio were implementing it anyway.

Prisons with this new policy in Ohio include: Mansfield, Toledo, Chillicothe, Grafton, Lebanon, Richland, SOCF Lucasville, Allen-Oakwood, NCI Caldwell, Dayton CI, Belmont, Marysville (Ohio Reformatory for Women), Madison, and Trumbull. NCCC is another facility with this new policy, though as a privately-held facility, some of the policies may be out of their control. Books to Prisoners noted that NCCC was sued in 2017 for their book policies.

Books to Prisoners said that they’ve confirmed the Ohio Department of Rehabilitation and Corrections (ODRC) is currently in the process of revising their policies and banning donations of used books state wide. This would ensure that the policy isn’t impacting just the people experiencing incarceration in the above-named institutions, but in any public institution state wide.

Further, Books to Prisoners revealed that Annette M. Chambers-Smith, the newly-appointed director of ODRC, isn’t unbiased. Prior to working with ODRC in January of this year, Chambers-Smith was the general manager of JPay Payment Services, a technology company which contracts with the ODRC for tablet services and e-books.

This policy directly impacts those in prison on a financial level. Purchasing one of these new books could cost more than a month’s salary and especially hurt those who do not have the financial support systems to help them receive these books as gifts.

Worse, it directly impacts their abilities to educate themselves and reduce the chances of recidivism.

“We want to see if we can stop bad policy before it’s finalized this time,” said Books to Prisoners.

To stop this policy, Books to Prisoners has set up a sample script and included people to contact in Ohio at the state level. Whether or not you’re a citizen, this is an easy step to help change the course of this potential policy and to help ensure that those in prison can have access to high quality, no cost materials from organizations dedicated to helping them gain skills, knowledge, and tools for strengthening themselves. Details are in the image and transcribed below. 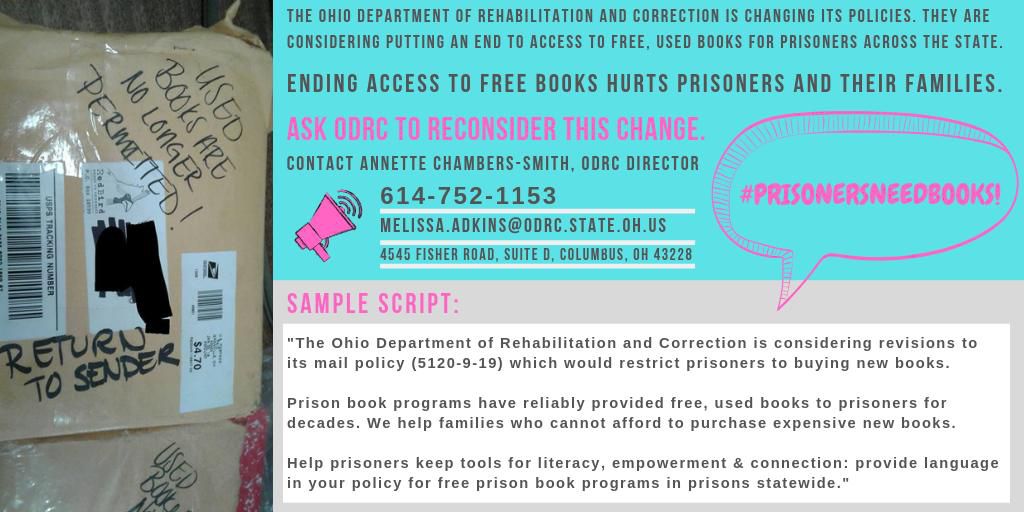 The Ohio Department of Rehabilitation and Corrections is changing its policies. They are considering putting an end to access to free, used books for prisoners across the state.

Ending access to free books hurts prisoners and their families.

Ask ODRC to reconsider this change.

“The Ohio Department of Rehabilitation and Corrections is considering revisions to its mail policy (5120-9-19) which would restrict prisoners to buying new books.

Learn more about how books in jails work, and specifically, how organizations donate used books to incarcerated people, in the latest episode of Annotated.