On paper, Turtles All the Way Down looks like a book so perfect for me that it might as well have been reverse engineered from the metadata of my life. I’ve been a Nerdfighter for years, and a John Green fan for longer. The day The Fault in Our Stars came out, I rushed to the bookstore to make sure I got a signed copy. For my quinceañera, I went to Vidcon to meet John and Hank Green, instead of having the huge party I had schemed about since my Jewish friends’ first bat mitzvah invitations went out. Most importantly, John Green is one of only a few public figures I know of, and the only one who my younger self looked up to and admired, who, like me, has Obsessive Compulsive Disorder. I remember how alone I felt, years ago, quietly sobbing while writing a note to John Green on tumblr, telling him what I couldn’t say aloud to anyone, confessing how scared I was of this illness, and asking if it was worth it to hope for a better future. 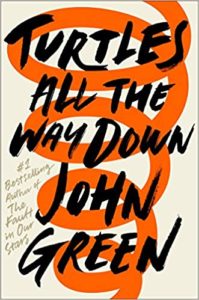 Fast forward six or so years and Turtles All the Way Down comes out. I had just finished intensive treatment for my OCD and was living a life where my symptoms weren’t in control of me. I was living a life where I could, so I thought, actually read this book about a young woman with OCD and not have my own illness triggered. Turtles All the Way Down felt like more than just a book—it was a trophy. This was the moment where I proved to myself just how much I had changed.

Unfortunately, I was not able to finish Turtles All the Way Down. While reading it, I had a resurgence of OCD symptoms, and though they may not have necessarily been triggered by the book, it was too hard to continue reading while also dealing with them. So I put down the book and haven’t yet picked it up again. In a classic OCD move, Turtles All the Way Down carries with it an air of anxiety for me. I think I’m avoiding it a little. And that makes sense, because OCD will always be a part of my life. It didn’t go away with treatment, but it got a whole lot smaller. It will wax and wane, but I know now how to recognize and control it. I am confident enough in my skills that I know I could sit with the anxiety and finish Turtles All the Way Down.

But I still haven’t. Why? Maybe because it reminds me how OCD will always be there, and some days that’s harder to accept  than others. Maybe for all my confidence and pride, a part of me is embarrassed that my shiny, new fresh out of treatment self couldn’t finish this book when it was supposed to be a sign of how far I’d come. Maybe I like what it symbolizes for me right now. I’m still learning and growing, and like my relationship to OCD, I expect that how I feel about this book will continue to change.

So officially, Turtles All the Way Down is on my TBR list, but when I’ll decide to take the plunge and finish it, I don’t know. The funny thing though, is that I still absolutely love it. I love that it exists. Because my 8th grade self needed this book to know she wasn’t alone. And maybe she couldn’t have finished it, just like I haven’t, but to know you are understood is one of the greatest gifts of reading. And when I read Turtles All the Way Down I felt understood.

I don’t need to finish the book right now because I already know the main character, Aza. I am her. And I live my own OCD story, one where treatment isn’t an ending like I originally had thought, but a beginning. My symptoms can come and go, and thankfully I have the skills to deal with them in a way that I hope Aza in her fictional universe can one day also have. Similarly, I am now lucky enough to have beautiful friends that understand me and OCD, who have struggled in the same way. But this book feels like a token for my younger self, who felt so vulnerable and alone. I love Turtles All the Way Down not because I need it today, but in memory of the me that cried alone just wanting to be understood, and in recognition of everyone else who is living their own OCD story waiting to feel less alone.

Sign up for What's Up In YA? to receive all things young adult literature.
Thank you for signing up! Keep an eye on your inbox.
By signing up you agree to our Terms of Service
#Our Reading Lives#Young Adult Literature#john green#our reading lives#YA lit