The Association of Writers & Writing Programs (AWP) hosts a yearly conference that’s chock full of panels, readings, and other book-related events. This year, writers, publishers, reviewers, readers, and educators descended on Portland, Oregon’s one million square feet of convention center to hear keynote speaker Colson Whitehead (author of The Underground Railroad and Sag Harbor), among other readers, and to network network network.

The book fair hosted rows upon rows of book publishers, magazines, journals, and all readable things. Here are some of the highlights that caught my eye in a bevy of free buttons and candy. 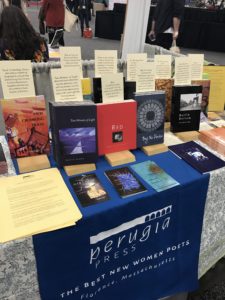 This press selects one title to publish per year. That means an intense focus on one woman’s poetry collection annually. The selection stems from their annual contest. This year’s publication was Hail and Farewell by Abby E. Murray. Finalists included Desirée Alvarez’s Raft of Flame and Shannon K. Winston’s The Girl Who Talked to Paintings. 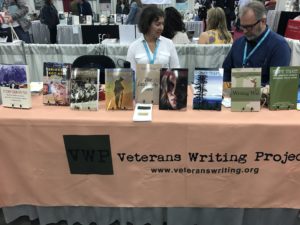 VWP publishes the quarterly journal O-Dark-Thirty, a collection of veteran voices as well as the writing of those who have relationships with veterans. They also host seminars for veterans to write creatively. Their creative writing handbook, Writing War: A Guide To Telling Your Own Story, is written by a veteran for veterans. 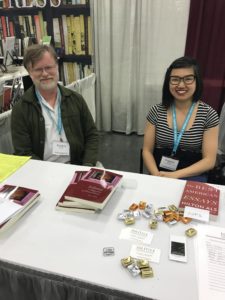 Solstice: A Magazine of Diverse Voices

Solstice is on a mission to publish writers known and yet-to-be known who write experimentally or mainstream. They seek to voice writers who have been traditionally underserved. This year, they celebrate their ten year anniversary! 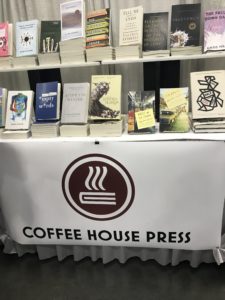 You may be familiar with Coffee House Press if you’ve read Prelude To Bruise by Saeed Jones. Keeping with the same poetic vibes, Not Here by Hieu Minh Nguyen Mitochondrial Night by Ed Bok Lee offer some stunning verses. 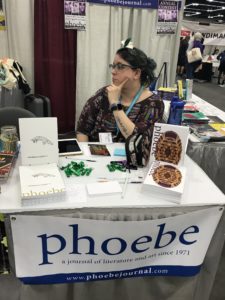 Phoebe is a journal for literature and the arts. They called me over to their table by asking if I’d like to write a quick note to encourage a writer. They send hand-written notes to submitters to show they are reading and they care. Yes, more of this, please. 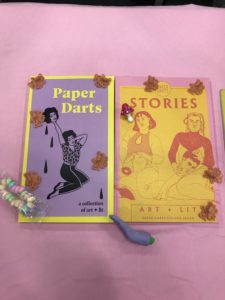 As a magazine of literature and art, Paper Darts finds and shares fresh, unique voices that comment on the universe in unexpected ways. Plus, they had tiny octopuses all over their table. (My description is not doing them justice.) 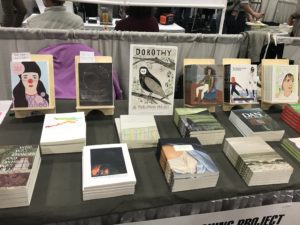 When I asked why it’s a project and not a press, an editor explained that Dorothy, A Publishing Project views all the works as a collective. No one work is more important than the other. They have no new and old publications. They have simply publications. I can get behind this! 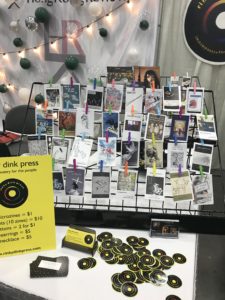 Tiny everything! Rinky Dink Press publishes micropoetry. They make tiny journals. Each is 2.75″ x 4.25″ format, which is smaller than your average index card. They also repurpose vinyl record adapters into jewelry. 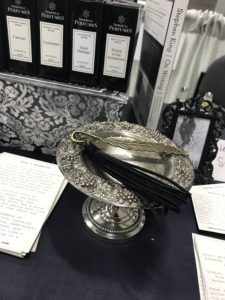 The big blur that was my four day AWP extravaganza drew in so much more. If you attended, what did I miss here that you loved there?

And a special thanks to Portland for the hospitality. And doughnuts. Their doughnut game is something spectacular as is their book game.