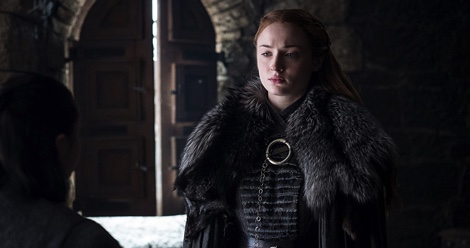 I’ve found many of my favorite book characters through defending them against other people’s criticisms. Ginny Weasley is one, as her portrayal in the films made her romance with Harry seem random and lame, while in the books she was fierce and strong. Sansa Stark, from book series A Song of Ice and Fire and HBO series Game of Thrones, is another. I’m here to officially endorse Sansa Stark for the Iron Throne at the end of this upcoming season.

I can often judge whether I trust people’s Game of Thrones opinions by how much they appreciate Sansa as a character, as many people, perhaps with sexist undertones, insist on thinking of her only as the childish romantic she was in season 1. Yet she is one of the series’s best and most complex characters, with one of the most wide-ranging and interesting storylines: a young girl with romantic notions who grows up alone and through a ton of hardship, and learns a ton.

View this post on Instagram
Category ID: 480
Swords & Spaceships Newsletter
Sign up to Swords & Spaceships to receive news and recommendations from the world of science fiction and fantasy.
Thank you for signing up! Keep an eye on your inbox.
By signing up you agree to our terms of use

She learns, in fact, from everyone she meets, good or bad. She has taken lessons on politics and ruling from Cersei, Tyrion, Jon, Ned, Arya, Littlefinger, Joffrey, and more of the major players. While focusing on her own survival, she has taken the best traits and lessons from many of our favorite characters, and is busy consolidating them into one philosophy, one that is brutal but kind, strong but fair.

Even before Sansa started to solidify into a serious player for the throne, I suspected that she was a contender. My father and I recognized early on how much George R.R. Martin is inspired by the UK’s history, and so we found it suspicious how much Sansa resembles Princess Elizabeth I. Sure, the red hair. But there’s also the case of Littlefinger, a man who loved Sansa’s mother but who pursues and advises Sansa (look up the stories about Thomas Seymour and Elizabeth’s stepmother Katherine Parr). And (until the show’s questionable choice to marry her to that cruel villain), Sansa was often engaged and even married but nothing was ever consummated, propagating the Virgin Queen idea—and after seeing the way men leach power off women, I bet Sansa doesn’t plan to get married once she’s Queen.

There’s also Elizabeth’s story: when a foreign queen who had a strong claim on the throne came into England, she brought with her a religion and culture that England resented and distrusted. Elizabeth had small pockets of support all over the country and was a beloved figure, and the people and lords rose to support her against the queen who had a great claim.

For a long time, my father and I have suspected that Daenerys will never be a Queen of Westeros. Sure, she has a great claim, but no one in Westeros knows her, or her philosophies, or trusts her way of ruling. People are terrified of the Targaryens, and are unlikely to rally for them. If they do, it will be out of fear of the dragons. Meanwhile, people in Kings Landing, the Aerie, the Twins, and Winterfell have all met Sansa or her family. In many of those places, Sansa has established herself as someone who is fair and kind. And she has both that goodness, that separation from the current cruel and brutal rulers of Westeros, and experience in Kings Landing and with ruling.

I’m going to go even more on a limb here and predict one of the final twists, based on Elizabeth’s story. The only thing George R.R. Martin has told us about the ending of this saga is that it will be “bittersweet.” In Elizabeth’s history, after she took the throne, she had to be persuaded to sanction the trial of Mary, and after the execution, actually claimed that she did not mean for the order for execution to be dispatched, blaming her secretary (although many historians doubt the sincerity of this protest). She was reluctant to execute this person despite their role against her, and despite the fact that having someone with that much legitimate claim to the throne and who had tried to take it would continue to be a big threat.

For a long time, I have believed the bittersweetness of the ending would come because Sansa would have to execute someone she loved in order to rule due to their role in a foreign plot against her. I assumed this wasn’t Daenerys, but would be a Stark, because that would be the most brutal turn that would still give us a good-ish ending. For a long time, I believed this was Arya. In the books, she is still bloodthirsty and focused solely on revenge, and it looked for a while like the show was going in that direction as well.

But now that Arya is reunited with her sister, I suspect it’s Jon. If Westeros chooses Sansa over Daenerys, if Daenerys is somehow ousted, Jon Targaryen, a man with a huge claim on the throne, and who will have kneeled to a different Queen, cannot possibly stay alive. Having Jon executed at the protest or reluctance of the Queen would be an interesting parallel to Ned Stark’s death. And I’m going to go even more on a limb here. Queen Elizabeth I claimed that she did not mean to execute Mary, but that the secretary sent out the order before she was decided. What occasionally ruthless person by Sansa’s side might decide to make a decision for her? Not…Arya, surely? That bit of my theory is very new, but it’s one I can’t discount either.

So there’s my official Game of Thrones prediction. It’s daring, but I wanted to get it in print—because worst case, I’m wrong; best case, I’ll have proof I knew what was coming. So there it is. What’s your prediction for who will take the Iron Throne?