Twenty years after her debut award-decked and canonical YA novel Speak hit shelves, Laurie Halse Anderson is back again with a new book that takes on similar themes. But this time, rather than putting readers into the fictional world of Melinda Sordino—survivor of high school, of peers, of sexual assault—we’re given a window into Laurie’s personal experiences of those same things. Melinda’s story is her own. So is Laurie’s.

SHOUT  is Laurie’s story about being a survivor, about being a woman, about being an advocate who is passionate about young people, about intellectual freedom, and about being the best people we can all possibly be. It’s angry and it’s hopeful. It’s sad and it’s powerful. It’s real and raw.

The verse is flawless. It adds movement and clarity. It is exactly what it wants to be: a shout, not a whisper. This is a masterclass in feminism, in storytelling, and in the power of words to draw action that changes the world.

Find below ten incredible quotes from SHOUT that will, no doubt, stay with you for a long, long time. Once you read these, go grab the book from your favorite bookstore or library. 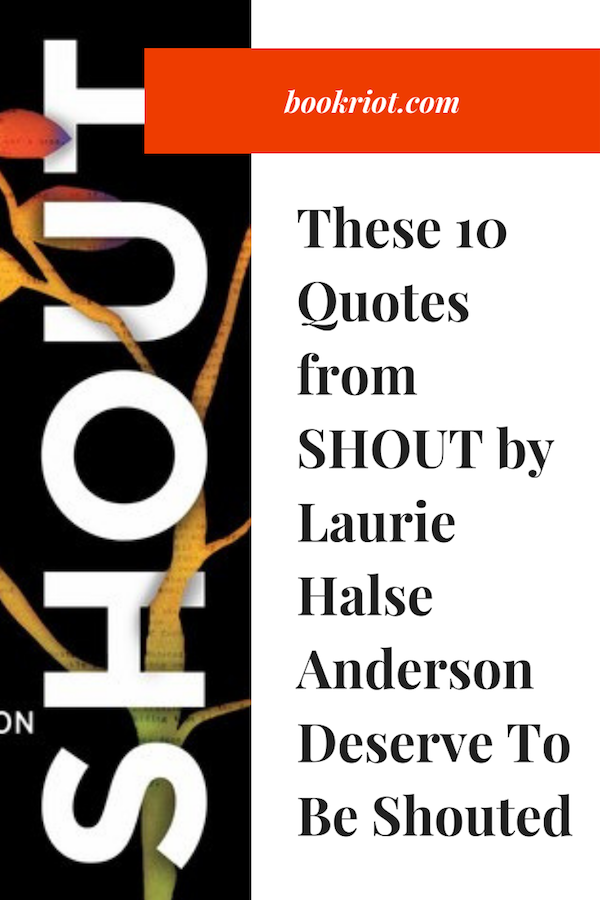 is a cancer of the soul

that can kill you

the temptation is to hide behind shields

play defense, drown ourselves in sorrow

or drug our way to haunted oblivion

Most relationships come with expiration dates

Before you can taste them.

cause when you figure out what’s eating you alive

you can slay it.

By bars or marks

Your scars deserve attention, too.

Censorship is the child of fear

the father of ignorance

and the desperate weapon of fascists

you render for them

The opposite of innocence

is not sin. Dearly beloved,

the opposite of innocence

We’re all born to fight,

but few are ever trained,

instead they tell us

away from the lake, leaning

on each other’s shoulders

the support. Feel the contractions

of another truth ready

to be born: shame

For more insight into the work of Laurie Halse Anderson, check out this interview with her on the 15th anniversary of Speak, her conversation with Courtney Summers on the power of girls’ stories, and dig into a discussion of censorship.

Sign up to receive Check Your Shelf, the Librarian's One-Stop Shop For News, Book Lists, And More.
Thank you for signing up! Keep an eye on your inbox.
By signing up you agree to our Terms of Service
#Lists#Young Adult Literature#quotes#quotes by laurie halse anderson#ya quotes