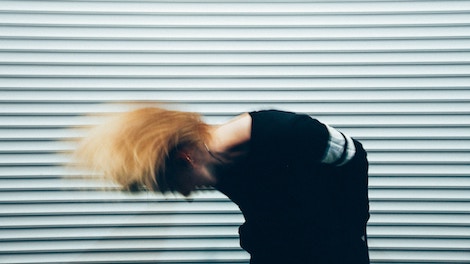 Does anyone else have a hard time getting angry? It comes so easily to some people, but for me it’s been more of a learned skill in adulthood. And it’s one I still need to work on. A lot. I grew up thinking of anger as this unacceptable, out of control emotion. But I see so many motivating impulses arise from anger. So much honesty and directness. And so much danger from anger that isn’t healthily processed. In our personal lives and political lives, there is so much to be angry about. If you also struggle with this so-called “negative” emotion, here are eight books to help you learn to get angry…or learn to get angry in a healthier and more productive way.

As you’ll see from the titles, many of these books are specifically for or about women or written from a Feminist perspective. However, I think readers of all gender identities could benefit from reading the books on this list. 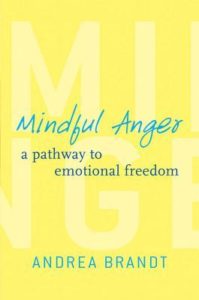 Mindful Anger: A Pathway to Emotional Freedom by Andrea Brandt

This is the first book on anger I ever read. It helped transform the concept of anger from something wholly negative to a normal emotion I could learn from. In the book, Brandt suggests that avoiding anger doesn’t actually get rid of the emotion. Instead, it can lead to health problems. Brandt gives detailed approaches to allowing yourself feel anger, focusing on being mindful of the physical sensations within your body. This lets you both let go of the emotion sooner and learn from the messages it’s trying to send you. If it sounds a little woo-woo, that’s because it is. But that doesn’t mean it won’t be helpful! 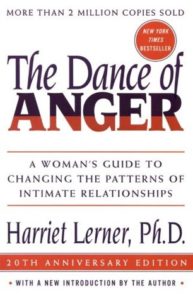 The Dance of Anger: A Woman’s Guide to Changing the Patterns of Intimate Relationships by Harriet Lerner

This is considered a “classic” about anger in the psychology/self help world. First published in 1985, the title singles out women but Lerner suggests people of all genders can find help in the book. The Dance of Anger examines anger through the lens of close relationships. The case studies Lerner brings up are often male/female romantic partnerships, but there are also conflicts between parents and children as well. Depending on the edition, some of these examples might feel very old-fashioned or even outdated. However, the reframing of anger as an important impetus to change is valuable and this book is a cult favorite of many people who’ve struggled with anger in their relationships. 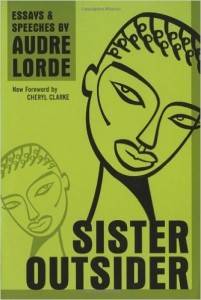 This collection brings together fifteen essays and speeches Lorde wrote between 1976 and 1984. They examine the intersections of different identities relating to race, gender, sexuality, and economic status. The book argues that anger is the only appropriate response to societal injustices and inequitable treatment of different groups of people. This became a foundational text for feminism’s development past the “second wave” or “White feminist” stage (although there is still much work to do). Lorde’s unapologetic anger is inspirational in these writings. For example, she writes: “I cannot hide my anger to spare you guilt, nor hurt feelings, nor answering anger; for to do so insults and trivializes all our efforts. Guilt is not a response to anger; it is a response to one’s own actions or lack of action.” Quotes like this reframe anger and show how it should be embraced for change to occur. 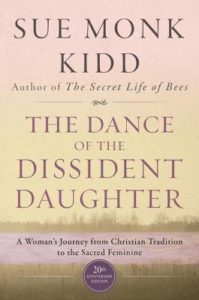 The Dance of the Dissident Daughter by Sue Monk Kidd

Sue Monk Kidd is better known for her novels, like The Secret Life of Bees. However this spiritual memoir about Kidd’s journey from half her life existing within the traditional Southern Baptist church to discovering what she called “the divine feminine.” And anger plays a big part in that journey. Anger at a comment from two men from her church about her daughter. Anger at the patriarchal system she’d never questioned and a passive, submissive role she’d been playing within it. This anger leads to an academic exploration into female centric religions, myths, and folklore, and offers important insight into how anger can be an important motivator for personal growth. 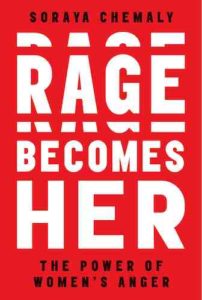 Rage Becomes Her by Soraya Chemaly

This books takes the gendering of emotions head on – specifically the ways we think about women and anger. This is not a self help book or a book about managing anger, instead it’s a manifesto offering permission for women to become angry. It does this by listing the numerous things women have to be angry about: street harassment, sexual double standard, and pay inequality to name a few. It also looks at the physical and psychological damage suppressing anger to conform to a “nice” or “good girl” image inflicts on women’s bodies. 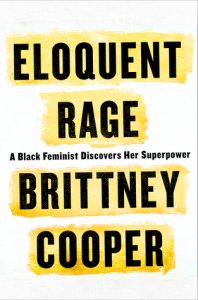 This book follows the Audre Lorde tradition, with a collection of personal essays about straddling the identities of being Black and being a feminist. Some are playful, such as an essay using Michelle Obamas hair as metaphor for respectability politics. Others are painful to read, like how she uses the story of her mother’s attempted murder to illustrate our societal problems with toxic masculinity. With a harsh critique white feminism and the treatment of anger from women of color, these essays offer an insightful look into intersection of anger and different social identities in contemporary American society. 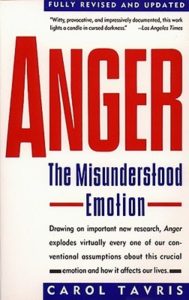 Here’s another pop psychology classic that has a lot that’s helpful and a fair amount that feels outdated. It takes a pretty different starting point to poke holes in the belief that anger must always be expressed. The book investigates exactly what anger is and helps readers figure out when to share it. This new revised version has updated some of the language about anger and gender and includes new sections on road rage, violence in sports, and chronic anger problems. 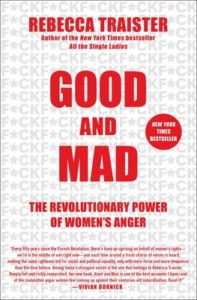 Good And Mad: The Revolutionary Power of Women’s Anger by Rebecca Traister

Ever since this book came out, my phone has been blowing up with texts from friends sending me quotes. And I can see why. It takes a long view at how women’s anger has functioned within the American political sphere. How anger can seen as a weakness for female candidates. And how anger has fueled important social movements from the suffragettes to #metoo. Traister also examines the way women have expressed anger towards each other within the feminist movement. In both of Traister’s books, she shows an uncanny ability to connect the personal experience to a larger historical story. This feels like an important thing to do through the lens of anger. Especially as we see the media attaching labels like “unlikeable” and “abrasive” to 2020’s female presidential candidates.