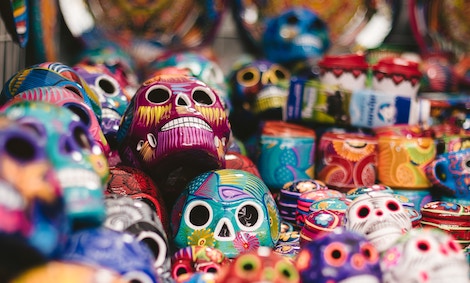 Late in January, I visited Mexico City. I escaped the frigid temperatures of the Midwest and dove into the world of sunlight and open-air bookstores, agave plants and early-morning tamales. But as I left, I had an important question: What should I bring to read? What books about Mexico City would best occupy me while I saw and explored the real thing?

I prefer to read books set in the place I’m visiting, and by authors who are from the country I’m in. I think that it both feels more legit that way—you’re connected to the place you’re visiting both when you’re in and out of your book—but also that it helps me find authors I haven’t read before, or pull me to classics that I should have read but haven’t yet, especially by authors of color. There are so many Mexican and Mexican-American authors that I should have read way earlier! And so much about Mexican history that I didn’t and should have known.

After my own digging for recommendations, here are my tips on what read if you’re visiting Mexico City, or if you just want to read more by some great Mexican or Mexican-American authors. As I visited the best bookish places in Mexico City, I dug into some of this fiction, and looked for these books on the shelves.

This is what I read throughout nearly my entire trip, and it was a sheer joy. Cisneros’s writing is full of humor, joy, vivid descriptions, snappy dialogue, and fun. It’s about Lala Reyes. Her family is visiting Mexico City from Chicago to stay with the Awful Grandmother. As the story unspools both backward and forward—into Lala’s coming of age and also back into the life story of the Awful Grandmother—you get this vivid picture of the Reyes family and its women, and their complex identities. It’s a gorgeous, fun book and was my perfect companion—I carried it up the pyramids, propped it up on the train ride to Coyoacán, and finished it in a quiet place in Chapultepec Park.

View this post on Instagram
Category ID: 476
Check Your Shelf Newsletter
Sign up to receive Check Your Shelf, the Librarian's One-Stop Shop For News, Book Lists, And More.
Thank you for signing up! Keep an eye on your inbox.
By signing up you agree to our terms of use

"Once in the land of los nopales, before all the dogs were named after Woodrow Wilson, during that epoch when people still danced el chotís, el cancán, and el vals to a violín, violoncelo, and salterio, at the nose of a hill where a goddess appeared to an Indian, in that city founded when a serpent-devouring eagle perched on a cactus, beyond the twin volcanoes that were once prince and princess, under the sky and on the earth lived the woman Soledad and the man Narciso."—CARAMELO by Sandra Cisneros ✨ #caramelo #sandracisneros #bookquotes #mexicocity #mexicanliterature #booksaboutmexico #goodbooks #bookrecommendation #booksandflowers

I would have read this one in Mexico City if I could have found it on the shelves of my local bookstore in time. The author of Like Water for Chocolate writes about Malinalli, a member of a tribe conquered by Aztec warriors who was the interpreter for and then lover of Hernán Cortés when he first arrived. Esquivel writes the story of one of the most controversial figures in Mexico City—she has been painted as a traitor, a victim, and more. Esquivel tries to give her a voice in this novel.

The Story of My Teeth by Valeria Luiselli, translated by christina Macsweeney

This one is high on my to-read list. The main character is an older world traveler, auctioneer, and collector of famous people’s teeth. Luiselli’s book was named one of the best books of 2015 by a ton of different outlets (including NPR, Kirkus, Publisher’s Weekly, and The New York Times), and it’s all set in the industrial suburbs of Mexico City. Like Malinche, this was one of the three novels I set up as an option for my main book to take with me to Mexico City, as it’s supposed to be absolutely superb.

The Labyrinth of Solitude by Octavio Paz

This one is for the philosophers or non-fiction lovers. It’s for people who aren’t afraid to dig deep even in their vacation reading. 1990 Nobel Prize for Literature winner Octavio Paz digs in this essay collection into Mexico’s quest for identity, seeking in poetic and intellectual prose to examine Mexico’s people and their character and culture, defining a country hidden behind a “mask,” a solitude. I bought this book at a bookstore in the city, and have been slowly working through it since. It’s fascinating and beautiful, and I’m enjoying Paz’s interpretations so far.

I purchased El Diario de Frida Kahlo at Centro Cultural Elena Garro in Mexico City. I thought it was a good book to struggle through in Spanish—it felt right to read Kahlo's entries in her original language. And I had just become entranced with her at Casa Azul, the Frida Kahlo museum, so I was ready to learn more. It's now on my to-read stack. ✨ #eldiariodefridakahlo #mexicocity #centroculturalelenagarro #spanishbooks #booksintranslation #fridakahlo #casaazul #literarytravel #coyoacán #thediaryoffridakahlo

The Diary of Frida Kahlo: An Intimate Self-Portrait

One of the best stops on my Mexico City trip was Casa Azul, the house where Frida Kahlo grew up, learned to paint, and later lived with Diego Rivera. It’s a stunning museum, and her diary, which I bought in Spanish, is gorgeous and an intimate look into her life, her wonderings, and her pain, that serves as excellent accompaniment to the museum and its revelations. It’s a heavier hardcover, so maybe this is one to read before or after your trip; that said, having it to dig into just after I’d visited the museum was really wonderful, and the museum even references the diary at one point while showing her color palette.

Mexico: From the Olmecs to the Aztecs by Michael D. Coe and Rex Koontz

I recommend catching up on Mexican history in advance as much as possible. A lot of the museums I went to, from the Museum of Anthropology to the ruins themselves at Teotihuacán, understandably did not have substantiative captions or descriptions in English. I did much of my reading online, but I think it would be a good idea to read up on history both about the ancients…

Fire & Blood: A History of Mexico by T.R. Fehrenbach

…and even more importantly about modern Mexican history. I learned from talking to fellow tourists at Chapultepec Castle that so few people know much of anything about Mexican history after Cortés arrived! I don’t have a personal recommendation here because I just read as much as I could online, but I really encourage you to read up in advance, on the revolution, the viceroys, on Díaz, and more. This book covers up to the mid-1990s.

My decongestants buried my sinuses in a dry heap of sand today, so I'm distracting myself from the cold outside, and from my headache, by burying myself in my plans for Mexico City instead. Only two weeks now to wait! ✨ #mexicocity #bookishtravel #literarytravel #travelbooks #downanddeliriousinmexicocity #danielhernandez #lonelyplanet #atlasobscura #travellove #wintergetaway

Down & Delirious in Mexico City: The Aztec Metropolis in the 21st Century by Daniel Hernandez

I read this book as I prepared my trip to Mexico City. Hernandez, a Mexican-American, visits the City and finds himself unable to leave. He writes about subcultures and religious or spiritual cults in Mexico City in the early 2000s, using immersive journalism and interviews to report in a very personal way about groups—from the punk culture in the city and how it had to go underground for a long time, to the fashion and party culture and the ways it can go wrong. I loved this book. For me, it was a way to learn more about the sides of Mexico City I was unlikely to see or read about on my trip, and I appreciate the way it filled in some of the blank spaces.

What other recommendations do you have for me about Mexico City? Let me know in the comments!