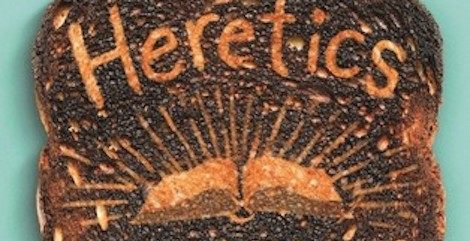 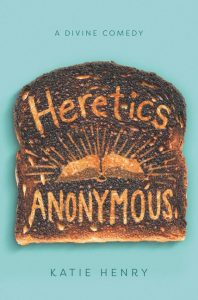 It was the cover that drew me to this book. A piece of burned toast, with the imprint of an open, light-emitting Bible in the center, framed by the words “Heretics Anonymous.” When the book cover talked about an atheist kid starting at a Catholic school and a group of religious oddballs called Heretics Anonymous, I knew I had to read it. I was raised Protestant and attended a Catholic high school, but as an adult I’ve struggled with the faith of my youth. I like to read gritty faith-related books, possibly because they make me feel less like a heretic myself.

Katie Henry’s debut novel deftly handles differing spiritual beliefs, or lack thereof, by putting five very different characters together. Michael is an atheist, Lucy is a feminist Catholic, Avi is a gay Jew, Eden is a Celtic Reconstructionist Polytheist (basically, a pagan), and Max is a cape-wearing Unitarian.

Michael, who hates that he’s been forced by his parents to attend a Catholic school, is relieved when Lucy speaks up in theology class to challenge the teacher, assuming that she’s an atheist like himself. He’s surprised and chagrined to find out that Lucy is actually a devout Catholic. Except she wants to be a priest.

Things get even more complex when Michael develops feelings for Lucy, even though he doesn’t understand why she believes in God or the Catholic Church. As the two grow closer and Michael questions her faith, Lucy explains how she finds parts of the Bible revolutionary, and how she believes in the power of love. Michael muses, “I still don’t think any of it’s true. But if Lucy, the smartest, most logical person I know, can feel something real and powerful when she talks to God, then the whole thing is a lot more complicated than I thought.”

In another scene, the group is at Eden’s house and Lucy makes fun of Eden’s altar to Brighid, the Celtic goddess of spring. Eden bristles and informs her friend, “I know you think this is all really silly, but you could at least pretend you don’t. I don’t treat your religion like that…just give me the same respect.”

This is Henry’s genius: she allows her characters to be surprised about each other’s beliefs, to question each other’s faith, and sometimes, to insult each other. It is through all of those missteps that the characters learn how to respect each other’s journeys of faith (or lack thereof). Instead of pushing away people who are unlike them, these teens learn to build strong relationships despite deep religious differences. Through honest and humorous storytelling, this book teaches us all the importance of religious tolerance.