If you’ve been keeping up with The CW’s Supergirl, you know that there’s been a little ship tease between tech guru and former-ish member of the Legion of Super-Heroes Brainiac 5, and the badass, future-predictin’ reporter Nia Nal. And I for one could not be happier about it.

For starters, this is faithful to the comics, where Brainy and Nia (there known as Nura Nal, aka Dream Girl) did have a thing for a while. Then there’s the fact that Nia is transgender. A happy trans person in a healthy relationship is practically unheard of in American television, so if this goes where it looks like it’s going, I will be cheering from the metaphorical rooftops.

Or rather, most of me will be cheering.

There is the annoying matter of my inner teenager.

I first really learned about the Legion through the cartoon series Legion of Super Heroes, which aired on The WB (now The CW) from 2006 to 2008. It revolved around the adventures of the Legion and a time-displaced young Superman (pointedly not called Superboy because the copyright status on that name was, scientifically speaking, a big freakin’ mess). I haven’t really seen the show since it originally aired, but one thing sticks out loud and clear in my mind: Brainiac 5’s devastatingly obvious crush on Superman.

Here, have a screencap. 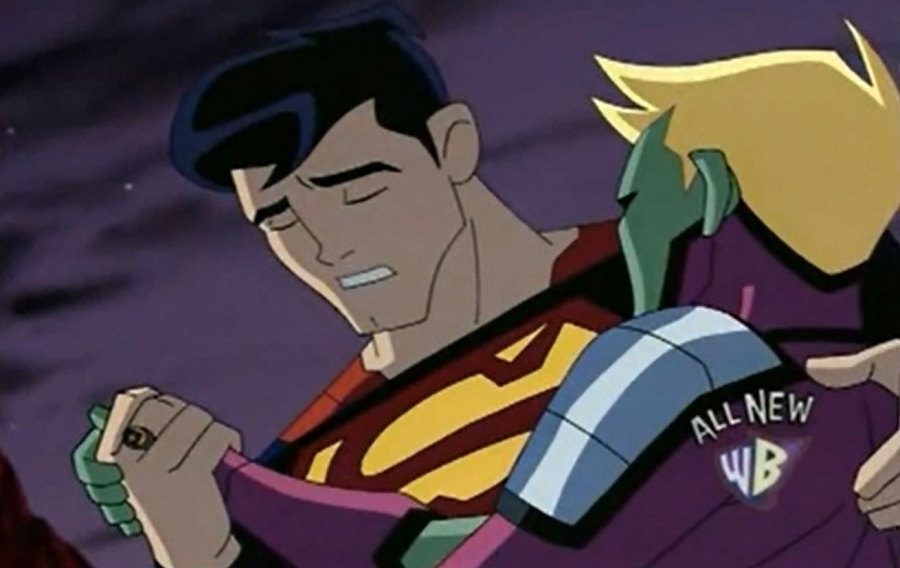 I’ll let you enjoy that for a moment…and now for context.

At the end of Season One, Superman went back to his home in the 21st century. Brainiac 5 misses him so much that he now spends his days in the holographic training room, concocting scenarios where he sacrifices himself to save Superman just so he gets to hear Supes compliment him as he “dies” in his arms.

I don’t know what things are like on Colu, but here on Earth, that is not normal, my dude.

Just to drive home the point, Brainy’s teammates make fun of him afterwards, asking if he saved the world again or if he and Superman just went to the movies. Well, it’s nice to know they still have movies in the 31st century!

That wasn’t the only time the show hinted that Brainiac 5 was carrying a torch. But this was long before the days of The Legend of Korra and Steven Universe, so it could never go beyond mere hints. And let’s be real: even if the show was made now, no way would DC allow a big name like Superman to get involved with a guy. There was never any hope for this pairing, even before Legion of Super Heroes was abruptly canceled after two seasons.

And yet, I liked this show. I have fond memories of it to this day, in no small part because it introduced me to those wacky Legionnaires in the first place. The fact that I’ve read a grand total of maybe five LoSH comics only heightens the pedestal upon which I place the cartoon. For me, THIS is the Legion of Super-Heroes, not the decades of retcons and continuity snarls that compose their comic book history. So that means, for me, Brainiac 5 will always be in love with Superman.

I don’t object to Brainy and Nia dating. It’s not “ruining my childhood” or anything dramatic like that. It’s just that there will always be a stubborn, bitter part of myself that wants to see all the hints in Legion of Super Heroes reach their logical conclusion.

But I won’t let that stop me from enjoying—nay, celebrating—what’s happening on Supergirl. I’m going to squeal through every second of Nia and Brainy’s hilariously awkward flirting. And when (when not if; do you hear me, The CW?) they finally get together, I will shriek with joy while simultaneously beating back my inner teenager with a stick.