This past year, I became an aunt to my brother and sister-in-law’s dog, Remi. As the mother to two kitties, I’d always counted myself a cat person, but hanging out with Rem soon had me falling head over heels in love with this dog. Before long, I was #dogstagramming with dog selfies and everything, which got me searching for dog poems. Is “dog poetry” a thing? Oh, yeah!

Turns out, many poets have taken up the pen to capture the essence of man’s best friend. In these poems about dogs, a variety of poets tackle distilling fido’s spirit into verse, with quirky, poignant, and happy dog poems among them. From Emily Dickinson to Pablo Neruda, this selection of poets demonstrate the range of ways we relate to dogs in these short dog poems. And if you’re looking for rainbow bridge poems, skip to the end for a few of the best dog poems for those in grief. 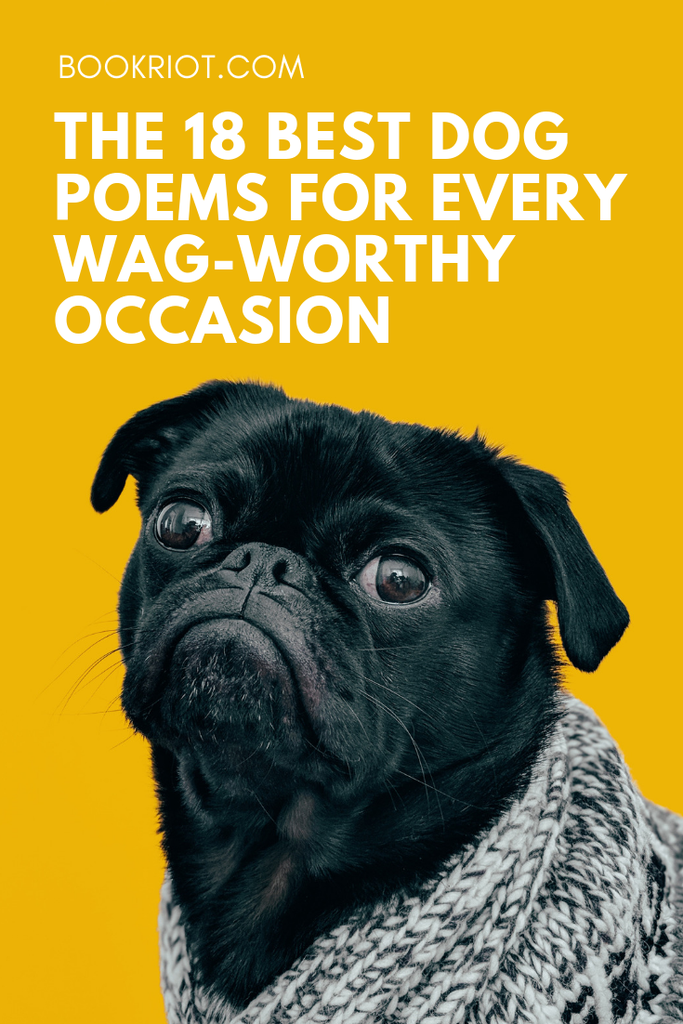 1. “A little Dog That Wags His Tail” by Emily Dickinson

Another class remind me

The truth I do not stretch or shove
When I state that the dog is full of love.
I’ve also found, by actual test,
A wet dog is the lovingest.

Into the gravity of my life,
the serious ceremonies
of polish and paper
and pen, has come

as if I needed him
to prove again that after
all the careful planning,
anything can happen.

Behind his house, my father’s dogs
sleep in kennels, beautiful,
he built just for them.

They do not bark.
Do they know he is dead?
They wag their tails

& head. They beg
& are fed.
Their grief is colossal

& forgetful.
Each day they wake
seeking his voice,

their names.
By dusk they seem
to unremember everything—

to them even hunger
is a game. For that, I envy.
For that, I cannot bear to watch them

pacing their cage. I try to remember
they love best confined space
to feel safe. Each day

a saint comes by to feed the pair
& I draw closer
the shades.

I’ve begun to think of them
as my father’s other sons,
as kin. Brothers-in-paw.

My eyes each day thaw.
One day the water cuts off.
Then back on.

They are outside dogs—
which is to say, healthy
& victorious, purposeful

& one giant muscle
like the heart. Dad taught
them not to bark, to point

out their prey. To stay.
Were they there that day?
They call me

like witnesses & will not say.
I ask for their care
& their carelessness—

wish of them forgiveness.
I must give them away.
I must find for them homes,

sleep restless in his.
All night I expect they pace
as I do, each dog like an eye

roaming with the dead
beneath an unlocked lid.

6. “A Dog in San Francisco” by Michael Ondaatje

Sitting in an empty house
with a dog from the Mexican Circus!
O Daisy, embrace is my only pleasure.
Holding and hugging my friends. Education.
A wave of eucalyptus. Warm granite.
These are the things I have in my heart.
Heart and skills, there’s nothing else.

I usually don’t like small dogs but you
like midwestern women take over the air.
You leap into the air and pivot
a diver going up! You are known
to open the fridge and eat when you wish
you can roll down car windows and step out
you know when to get off the elevator.

I always wanted to be a dog
but I hesitated
for I thought they lacked certain skills.
Now I want to be a dog.

I hate the word, and I guess that’s why it is said?
People love to hurt one another.
It is what makes us human.
I do love dogs.
They don’t seem to be evil unless humans make them that way.
Dogs can maul and they can sniff out bombs.
They’ll get as close to you as they can while you’re sleeping.
They’ll share heat and scent in the crook of your knees.
Is there really a thing such as innocence?
I have desired from birth to live.
Daily, I wrestle the tight arms of guilt.
At the shelter, the adoption coach told us that our new dog was highly food motivated.
I have been called a bitch.
Our dog trembles when he’s afraid and the only thing we can do is wait for the fear to leave.
There’s no comforting him.
In a dream they held me down, scrawled BITCH across my chest in old embers.
They covered my head as a weapon was raised.
I had a dog who once kept me from walking into the arroyo.
She blocked my path and wouldn’t move.
I’ll never know what, or who, she saved me from.

It’s just getting dark, fog drifting in,
damp grasses fragrant with anise and mint,
and though I call his name
until my voice cracks,
there’s no faint tinkling
of tag against collar, no sleek
black silhouette with tall ears rushing
toward me through the wild radish.

As it turns out, he’s trotted home,
tracing the route of his trusty urine.
Now he sprawls on the deep red rug, not dead,
not stolen by a car on West Cliff Drive.

Every time I look at him, the wide head
resting on outstretched paws,
joy does another lap around the racetrack
of my heart. Even in sleep
when I turn over to ease my bad hip,
I’m suffused with contentment.

If I could lose him like this every day
I’d be the happiest woman alive.

10. “Waiting for Happiness” by Nomi Stone

Dog knows when friend will come home
because each hour friend’s smell pales,
air paring down the good smell
with its little diamond. It means I miss you
O I miss you, how hard it is to wait
for my happiness, and how good when
it arrives. Here we are in our bodies,
ripe as avocados, softer, brightening
with latencies like a hot, blue core
of electricity: our ankles knotted to our
calves by a thread, womb sparking
with watermelon seeds we swallowed
as children, the heart again badly hurt, trying
and failing. But it is almost five says
the dog. It is almost five.

#BillMurray reading a poem about a dog is something you never knew you needed…until now. @isleofdogsmovie #SXSW pic.twitter.com/z7GkTsy4rG

The way the dog trots out the front door
every morning
without a hat or an umbrella,
without any money
or the keys to her doghouse
never fails to fill the saucer of my heart
with milky admiration.

Who provides a finer example
of a life without encumbrance-
Thoreau in his curtainless hut
with a single plate, a single spoon?
Gandhi with his staff and his holy diapers?

Off she goes into the material world
with nothing but her brown coat
and her modest blue collar,
following only her wet nose,
the twin portals of her steady breathing,
followed only by the plume of her tail.

If only she did not shove the cat aside
every morning
and eat all his food
what a model of self-containment she
would be,
what a paragon of earthly detachment.
If only she were not so eager
for a rub behind the ears,
so acrobatic in her welcomes,
if only I were not her god.

16. “we have no choice in the bodies that hold us” by Holly Amos

Thing of dirt and water and oxygen marked by thinking
and reacting and a couch
one may or may not be permitted
to sleep on. He may not permit me
to touch him or to take the bone
from his mouth, but he does, and that’s a choice
based on many factors, not the least of which
is his own desire to let me
do these things. How I could ever
think or feel myself more
deserving of a single thing than
this being, whom I call by a name the same way
my parents chose a name for me. The same way my genes
went expressing themselves to make my face exactly
my face. This isn’t special. Or this is special. But it’s one
answer, the same, for us both.

17. “A Dog Has Died” by Pablo Neruda, Translated from the Spanish by Alfred Yankauer

My dog has died.
I buried him in the garden
next to a rusted old machine.

Some day I’ll join him right there,
but now he’s gone with his shaggy coat,
his bad manners and his cold nose,
and I, the materialist, who never believed
in any promised heaven in the sky
for any human being,
I believe in a heaven I’ll never enter.
Yes, I believe in a heaven for all dogdom
where my dog waits for my arrival
waving his fan-like tail in friendship.

Ai, I’ll not speak of sadness here on earth,
of having lost a companion
who was never servile.
His friendship for me, like that of a porcupine
withholding its authority,
was the friendship of a star, aloof,
with no more intimacy than was called for,
with no exaggerations:
he never climbed all over my clothes
filling me full of his hair or his mange,
he never rubbed up against my knee
like other dogs obsessed with sex.

No, my dog used to gaze at me,
paying me the attention I need,
the attention required
to make a vain person like me understand
that, being a dog, he was wasting time,
but, with those eyes so much purer than mine,
he’d keep on gazing at me
with a look that reserved for me alone
all his sweet and shaggy life,
always near me, never troubling me,
and asking nothing.

Ai, how many times have I envied his tail
as we walked together on the shores of the sea
in the lonely winter of Isla Negra
where the wintering birds filled the sky
and my hairy dog was jumping about
full of the voltage of the sea’s movement:
my wandering dog, sniffing away
with his golden tail held high,
face to face with the ocean’s spray.

There are no good-byes for my dog who has died,
and we don’t now and never did lie to each other.

So now he’s gone and I buried him,
and that’s all there is to it.

18. “Half Border and Half Lab” by Heather McHugh

Customs and chemistry
made a name for themselves
and it was Spot. He’s gone to some
utopos now, the dirty dog, doctor of
crotches, digger of holes. Your airy clarities be damned,
he loved our must and our mistakes — why hit him, then,
who did us good? He’s dead, he ought
to be at home. He’s damned
put out, and so am I.

When blue is carried out, the law is red.
When noon is said and done, it’s dusk again.
The greed for table makes the greed for bed.
So cave canem, even stars have litters — little
lookers, cacklers, killers . . . Morning raises up
the hackled men. (What’s
milk, among our ilk, but
opportunity for spillers?)

He saved our sorry
highfalutin souls — the heavens haven’t saved a fly. Orion’s
canniness who can condone? — that starring story, strapping blade! —
and Sirius is  just a Fido joke — no laughter shakes the firmament.
But O the family dog, the Buddha-dog — son of a bitch!
he had a funny bone —

Want more literary dogs? We’ve got your best dog books, bookish gifts for pets, and a quiz to find out which literary dog you are.