One Christmas was so much like another, in those years around the sea-town corner now and out of all sound except the distant speaking of the voices I sometimes hear a moment before sleep, that I can never remember whether it snowed for six days and six nights when I was twelve or whether it snowed for twelve days and twelve nights when I was six. —A Child’s Christmas in Wales by Dylan Thomas 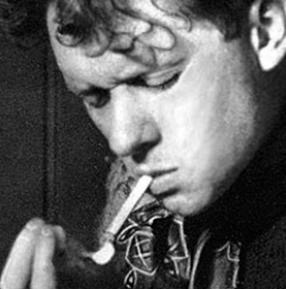 By the time Dylan Thomas began his 1952 stay at The Chelsea Hotel (Thomas’s favorite hotel in New York City), he was established as one of the masters of modern twentieth-century poetry. He had published his first book of poetry, 18 Poems, in 1934 when he was just 20 years old and received tremendous critical and popular acclaim. Thomas’s impassioned voice, clearly influenced by the musicality of language, was a welcome relief from the detached styles of W.H. Auden and Stephen Spender who were then dominating the English poetry scene.

Thomas had moved to London and he had taken on the persona of the young genius who needed to be indulged and adored. Such indulgence by his literary admirers had Thomas being the recipient of too many invitations to drink and carouse the London streets until dawn.  Within a short time, another aspect of the Dylan Thomas true mythology was established: Dylan Thomas drank far, far too much.

In 1934, Thomas met Caitlin Macnamara; they married the next year. Another part of the Dylan true mythology was established: Dylan and Caitlin fought and drank constantly, infidelities were rampant by both partners, and there was never enough money. Especially after their three children were born.

To earn money, Dylan Thomas became a regular favorite on the British Radio, the BBC, reading his poetry. No one could read Dylan Thomas like Dylan Thomas; his deep baritone naturally complemented the evocative and indelible landscapes of his poetry. His readings enhanced the evocative and indelible landscapes of his work: lost innocence and childhood nostalgia and the certainty of death that is waiting. The publication in 1946 of Deaths and Entrances further established Dylan Thomas as the genius of modern poetry—yet he was still angling for money and drinking and fighting with Caitlin. To earn money and escape his problems at home, Thomas began his legendary tours of the United States.

Meanwhile, in 1952, two young women graduated from Hunter College with degrees in Greek literature and decided to enter “the recording biz.” Barbara Holdridge and Marianne Mantell heard Thomas read his work at the 92nd Y and afterward attempted to speak to Thomas with the intention of asking him to record his work on their newly formed record label, Caedmon Records.

They left their contact information for Thomas, regardless of being roughly and snobbishly turned away. A fortuitous chance appeared for Mantell and Holdridge when Thomas’s manager returned their call and suggested that one of them call Thomas directly at The Chelsea Hotel but to call early, very early, about 4:30–6:00 am in the morning when Thomas would be returning from his night out. Holdridge remembered, “And we called and we called and we called,” and then one morning, Holdridge did speak to Thomas. And he said yes to their invitation to record an LP.

On February 22, 1952, Dylan Thomas entered the recording studio in midtown Manhattan. The commanding force of Thomas’s studio performance was immediately evident to Holdridge and Mantell and to everyone in the studio. Holdridge later recalled, “It was momentous for us. We had no idea of the power and beauty of his voice. We just expected a poet with a poet’s voice, but this was a full orchestral voice.”

This original recording on February 22, 1952, of A Child’s Christmas in Wales, would be registered as a 2008 selection for the United States National Recording Registry, stating that it is “credited with launching the audiobook industry within the United States.”

After the Dylan Thomas Caedmon LP was released in 1952, Thomas’s publishers put A Child’s Christmas in Wales into book format. Thomas’s lovely Christmas tale of vintage dreams and inventive language has not been out of print since, and, as for Caedmon Records, the ending is sweet.

Barbara Holdridge and Marianne Mantell’s recording venture that began with an invitation to Dylan Thomas would lay the foundation for the mass-marketing of spoken word performances that would transform into the audiobook industry. Holdridge and Mantell produced recordings of literary greats such as William Faulkner, Anne Sexton (recorded only months before her death), Katherine Anne Porter, Ezra Pound (retrieved from a mental hospital for his recording session),  Eudora Welty, E.E. Cummings, Archibald MacLeish, May Swenson among many others.

In 1970, Barbara Holdridge and Marianne Mantell sold Caedmon Records to HarperCollins publishers, yet retain its Caedmon label for audio recordings under HarperCollins.

Tragically, on November 4, 1953, Dylan Thomas went to the White Horse Tavern in Greenwich Village, New York, had eighteen whiskeys and said, “that must be a record,” and went back to the Chelsea Hotel. He collapsed into a coma and was taken to St. Vincent’s Hospital where he died on November 9, 1953. The cause of death was given as pneumonia and pressure on the brain due to alcohol.

It has been noted by mediums and psychics alike that Dylan Thomas has haunted Room 206 at The Chelsea Hotel. Several Chelsea Hotel visitors who stayed in Room 206, the last room Dylan Thomas stayed in, reports a figure resembling Thomas standing at the foot of the bed in the early morning hours before dawn, looking down at whoever would be sleeping in the bed, almost as if he was annoyed that after his long hours at the Greenwich Village bars drinking and spouting poetry, when all he had on his mind would be collapsing into bed, someone else was there.