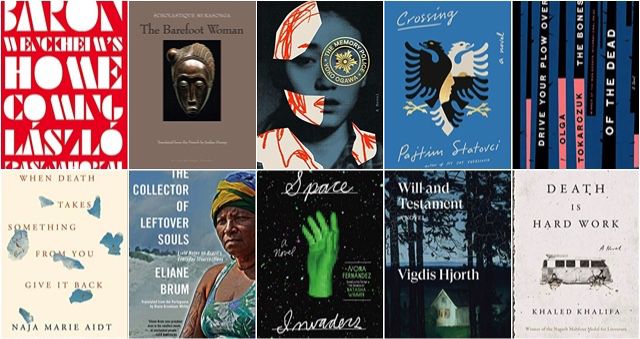 The National Book Foundation announced the 2019 National Book Awards Translated Literature longlist. This prize, which represents a permanent fifth National Book Award category, was added last year and honors a work of fiction or nonfiction that has been translated into English and published in the U.S. It was awarded last year to The Emissary by Yoko Tawada, translated by Margaret Mitsutani. This year’s longlist includes seven novels, two memoirs, and a collection of essays—originally written in ten different languages!

When Death Takes Something from You Give It Back: Carl’s Book by Naja Marie Aidt, translated by Denise Newman

Will and Testament by Vigdis Hjorth, translated by Charlotte Barslund

The Barefoot Woman by Scholastique Mukasonga, translated by Jordan Stump

The Memory Police by Yoko Ogawa, translated by Stephen Snyder

Drive Your Plow Over the Bones of the Dead by Olga Tokarczuk, translated by Antonia Lloyd-Jones

The shortlist will be announced October 8th. The winner will be announced November 20th at the 70th National Book Awards Ceremony. The $10,000 prize will be split evenly between the winning author and translator.

The judges for the category this year are Keith Gessen, a founding editor of n+1,  author, and translator; Elisabeth Jaquette, a translator and the executive director of the American Literary Translators Association; Katie Kitamura, whose most recent novel A Separation has been widely acclaimed; Idra Novey, author and translator, notably of Clarice Lispector; and Shuchi Saraswat, a writer and independent bookseller, she is also the curator of the Transnational Literature Series at Brookline Booksmith, an author events series that focuses on migration, exile, and displacement with an emphasis on works in translation.

Are any of your favorite books in translation on this list? Are there any you think are missing? Stay tuned for more announcements on longlists for poetry, fiction, and nonfiction!